Prince William: I'll Have to Ask 'the Missus' Before Taking George to a Soccer Game

Prince William, Duke of Cambridge arrives with Prince George of Cambridge at the Lindo Wing following the birth his second child at St Mary's Hospital on May 2, 2015 in London.
Samir Hussein—WireImage/Getty Images
By People

Prince William would love for his son Prince George to join him in the soccer stands – if he can get the go-ahead from his wife,Princess Kate.

“I’ll have to pass that by the missus, see how I can get away with it!” William tells BBC reporter Gary Lineker in a new interview to be aired ahead of the FA Cup soccer final on Saturday.

The prince, 32, is a huge fan of Aston Villa Football Club and admits that he’s hoping 22-month-old son Prince George shares his allegiance.

“The responsible thing would be to say to let him make his own mind up, but I think I might be quite biased!” William tells Lineker, adding, “I haven’t quite worked out how to play that yet.

“He can support whoever he wants, but if he supports Villa, it’d be fantastic. I’d love to go to the odd match with him in the future.”

But if George goes his own way, William also notes that his 1-month-old daughter, Princess Charlotte, could end up in the “Villains” camp: “It’ll probably end up being that Charlotte is the Villa fan, and George will go and support someone else!”

William will be attending the prestigious FA Cup Final at London’s Wembley Stadium on Saturday in his capacity as President of the English Football Association.

Along with watching his favorite team in action, he could get to fulfill every fan’s dream of handing the historic trophy to the Aston Villa captain should they triumph over London rivals Arsenal FC – also known as “The Gunners.” 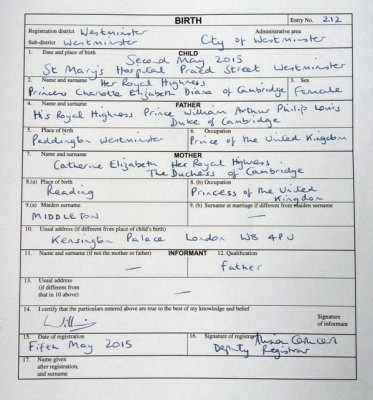 See the Birth Certificate for Princess Charlotte Elizabeth Diana
Next Up: Editor's Pick