Sen. Rand Paul: I Will Stop the Illegal NSA Spying

How will we defend ourselves if the Patriot Act expires? Well, perhaps we could just rely on the Constitution and demonstrate exactly how traditional judicial warrants can gather all the info we need—and how bulk collection really hasn’t worked.

We have all the tools we need to preserve both security and liberty. What we now need is a president with the will to do just that.

I have fought for several years now to end the invasive and illegal spying of the NSA on ordinary Americans. I am ready to debate how we fight terrorism without giving up our liberty.

MORE: Here’s What Could Happen If the Patriot Act Expires

Yet the expiration of the NSA’s sweeping, all-encompassing and ineffectual powers will not relinquish functions necessary for protecting national security but will instead do what we should have done all along—rely on the Constitution for these powers.

Of particular concern is allowing law enforcement to continue surveillance on suspected terrorists. This tool will still be available but through constitutionally sound warrants permitted by the Fourth Amendment. The only change is that the FBI must obtain a specific warrant for each device used by the suspect under surveillance through individualized warrants granted by the courts.

Bulk collection of phone records didn’t find or stop the Tsarnaev brothers from the massacre in Boston. In fact, one might argue that all of the money spent on bulk collection takes money away from human analysts that might have noticed the older brother’s trip to become radicalized in Chechnya. Just this week the FBI opined that they don’t have enough resources to monitor jihadists suspects in the U.S.

I would take the billions spent on collecting records of suspicionless Americans and spend it instead on FBI agents to monitor suspects who have given probable cause that they are a danger to us. In the recent jihadist attack in Texas, one of the terrorists was well known to authorities. He had already been convicted of a terrorism charge. I would spend more money and more time developing probable cause warrants to delve deeply and effectively into individuals like this.

Individual warrants every day are used to arrest dangerous people. I see no reason we can’t defend ourselves using the same Constitutional processes we’ve used for over two centuries.

Our country was founded on the principle of individual—not general—warrants.

After the current illegal powers end Sunday night the government could still get a warrant. It will just have to say on it Mr. John Smith, not Mr. Verizon.

One suspect, one warrant. Not hundreds of millions of records swept up in one illegal order.

I would argue this will make us more safe, not less. It has been said that finding a terrorist is like finding a needle in a haystack. Well, for years, your government’s answer has been to make the haystack bigger by gobbling up every American’s information.

The Second Circuit recently ruled that Section 215 of the Patriot Act does not authorize bulk collection of phone records, and an alternative collection mechanism is unnecessary. In fact, the recent Department of Justice Inspector General report showed that the government is using broad terms in these letters to receive mass electronic transactional records.

The Inspector General report also concluded Section 215 was not responsible for preventing any terrorist plots because agents queried “did not identify any major case developments that resulted from use of the records obtained in response to Section 215 orders.”

Opponents of civil liberties cite the expiration of the “lone wolf” provision as dangerous, but this provision allowing law enforcement to track suspects who are unaffiliated with a formal terror network has never been used in a single investigation during the 14 years of the Patriot Act’s existence. Again, even when this provision expires, law enforcement will still be able to track foreign individuals who are suspected of engaging in terrorism through courts empowered to grant warrants if there is probable cause or reasonable suspicion.

The vast expansion of the spy state and the corresponding erosion of our Constitutional rights has not made America safer. Even the most vocal defenders of the program have failed to identify a single thwarted plot as a result of the government’s sweeping, undefined, and illegal war on civil liberties.

The Obama presidency will be recalled as the era when most Democrats, with the notable exception of the principled Senator Ron Wyden, abandoned civil liberties for the tyranny of power—a far cry from then-Senator Obama’s stirring defense of liberty in 2007. “Our Constitution works,” Obama said. “We will again set an example for the world that the law is not subject to the whims of stubborn rulers, and that justice is not arbitrary.”

It was a danger that Democratic Senator Frank Church presciently foresaw, warning that a dictator through the N.S.A. “could enable it to impose total tyranny, and there would be no way to fight back.”

Our government is not comprised of angels, and we must have rules in place that acknowledge that, and protect our rights while protecting our national security.

Now, it’s time for Republicans to lead when it comes to protecting the liberty of all Americans from the whims of stubborn rulers.

This president could fix the problem by himself but he hasn’t done so. I stand ready to help lead the way on this important matter. On Sunday I will stop the illegal NSA spying. 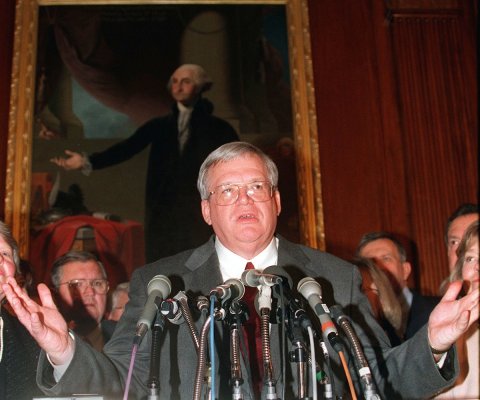 How a Scandal Made Dennis Hastert the Speaker of the House
Next Up: Editor's Pick