By Charlotte Alter and Sam Frizell

“Recently, the CEO of Goldman Sachs let his employees know that he’d be just fine with either Bush or Clinton,” he said in his campaign announcement on Federal Hill, overlooking Baltimore. “Well, I’ve got news for the bullies of Wall Street—the presidency is not a crown to be passed back and forth by you between two royal families.”

O’Malley is a longshot candidate for the Democratic nomination, polling at 1% among Democrats compared with Hillary Clinton’s 57%, according to a May 28 Quinnipiac survey, despite his frequent trips to Iowa and New Hampshire. His allies have launched a super PAC called Generation Forward that will support his campaign in early nominating states.

During his speech, O’Malley, who is also former mayor of Baltimore, cast the city’s recent racial unrest—including a night of riots after the funeral of Freddie Gray, who died of injuries sustained in police custody—as an symptom of a larger American problem. “What took place here was not only about race…not only about policing in America. It’s about everything it is supposed to mean to be an American,” he said. “The scourge of hopelessness that happened to ignite here that evening, transcends race or geography.”

He also took swings at Wall Street. “Tell me how it is, that you can get pulled over for a broken tail light in our country, but if you wreck the nation’s economy you are untouchable,” he said.

During his announcement speech, O’Malley highlighted his record as Maryland’s governor, noting that he supported a successful bid to legalize gay marriage and helped raise the minimum wage.

Read Next: Martin O’Malley Phoned Hillary Clinton Ahead of His Presidential Launch 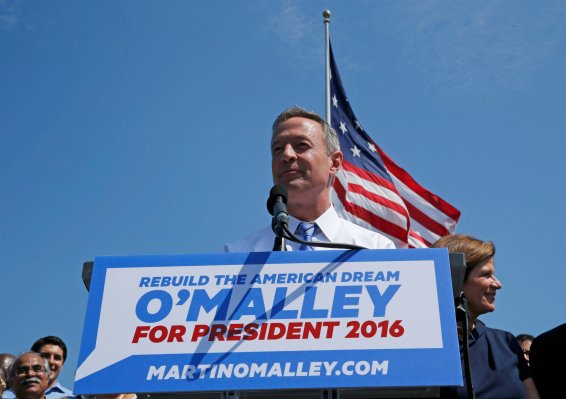 Martin O'Malley Phoned Hillary Clinton Ahead of His Presidential Launch
Next Up: Editor's Pick