Martin O'Malley Phoned Hillary Clinton Ahead of His Presidential Launch

The call between the two Democratic rivals was brief and cordial, and came on the same day that O’Malley filed his candidacy papers with the Federal Election Commission, according to two sources familiar with the conversation.

O’Malley, the two-term governor of Maryland who left office in January, is launching his presidential campaign Saturday morning in Baltimore, the city where he spent seven years as mayor.

Clinton and O’Malley have a complicated relationship as fellow Democratic party notables. O’Malley was one of the first Democratic governors to endorse Clinton’s candidacy for president in the 2008 election, and was a major fundraiser for the then-Senator. Last year, former president Bill Clinton strongly praised O’Malley’s time as governor.

But as he has prepared to run for the White House, O’Malley has staked out a position to Hillary Clinton’s left on an array of policies, including trade, Wall Street reform and immigration. While he has largely refrained from directly attacking her, he has made a point of emphasizing their disagreements at every juncture.

On the call, O’Malley told Clinton that he is running because he believes it’s time for “new leadership” of the country. Not coincidentally, the phrase is the slogan for his nascent presidential campaign, visible on half a dozen campaign signs around the stage at his launch event on Baltimore’s Federal Hill.

The 52-year-old plans to emphasize his youthfulness in comparison with Clinton, who is 67 and one of the oldest candidates to ever seek the presidency.

A spokesman for the Clinton campaign did not immediately respond to a request for comment.

O’Malley is a longshot candidate for the Democratic nomination, especially when compared to the Clinton juggernaut. Despite frequent trips to Iowa and New Hampshire with all the accompanying press coverage, O’Malley is polling at 1% among Democrats nationally compared with Hillary Clinton’s 57%, according to a May 28 Quinnipiac survey. 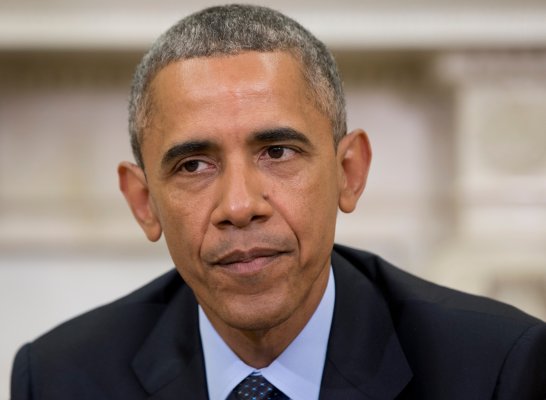 Obama Warns of Dangers of Inaction on Patriot Act
Next Up: Editor's Pick