How FIFA's Leader Has Clung to Power Despite Corruption Scandal

There aren’t many venues in global politics these days where developing nations, especially from Africa, can overrule their wealthy European peers. But FIFA is surely one of them. Such are the rules of the mammoth bureaucracy that governs the game of soccer—in its decisions, one country gets one vote, regardless how big or powerful—that even the worst scandal in its history could not dislodge the technocrat who enjoys the support of the developing world.

Sepp Blatter, who has run FIFA since 1998, easily won re-election on Friday to another four-year term. And it didn’t matter that nine officials under his command, including two direct subordinates, had been indicted by the U.S. two days earlier for allegedly taking millions of dollars in kickbacks during Blatter’s tenure. It also didn’t matter that the most influential nations in soccer, including all of Europe and North America, were intent on finally ousting Blatter after those arrests.

It didn’t matter because of delegates like Amaju Pinnick, the head of the soccer federation of Nigeria, who emerged on Friday evening from the congress hall in Zurich, Switzerland, wearing a pinstripe suit and a radiant smile. His friendship with Blatter dates back to 1999, when the newly elected FIFA President paid a visit to Nigeria. “I was privileged to go with the VIP volunteers who worked with him,” says Pinnick, who was then a mid-level official in Nigerian soccer. “He told me what he wanted to do for Africa, what he wanted to do for the developing nations,” he recalled. “He wants the small nations in FIFA to feel very important.”

The FIFA congress was full of such testimonials. On the massive screens above the stage, videos promoting Blatter’s good works ran at regular intervals, one showing a montage of African children playing soccer on the beach. “We promote soccer, everywhere,” the voiceover explained. At one point, Isha Johansen, the head of the soccer federation of Sierra Leone, stood up to thank Blatter for helping her country fight last year’s outbreak of the Ebola virus with a “solidarity token” of $50,000. “That was the very first international donation Sierra Leone ever received to fight Ebola,” she said.

There was no such praise, however, from the soccer federations of the developed world, which represented about a third of the 209 countries and territories that comprise FIFA. When the voting ended on Friday evening, the Westerners sulked out of the hall, saying little to the news cameras that tried to capture their frustration. The few who agreed to talk, like Jesper Moller Christensen of Denmark, expressed “disappointment” over Blatter’s re-election. “This is not the end,” he insisted. “There are disciplinary actions we could take if the evidence appears.”

But so far, the evidence hasn’t appeared. The indictments unsealed on Wednesday in New York detailed decades of bribes worth a total of around $150 million, which top FIFA officials allegedly received in exchange for granting promotional contracts, tournaments and other lucrative deals to their patrons. Nine of these officials are now under arrest in Switzerland, awaiting extradition to the U.S. to face charges including racketeering and money laundering. But Blatter is not among them.

“Right now he is unscathed,” said the dejected president of the soccer federation of Cyprus, Costas Koutsokoumnis, as he stood smoking outside the congress hall after Blatter’s re-election. “His name is not touched anywhere.”

This fact did not come as a surprise to Brett Forest, who has spent years investigating corruption in the world of soccer. “Many journalists for decades have been on to this guy,” said Forest, a senior writer with ESPN Magazine who recently published a book on match-fixing at the highest levels of the game. “But no one has ever found anything that’s really good enough. That tells you this guy is a smart player.”

Rather than exposing himself through blatant bribery schemes, Blatter has tended to use small development projects to win the loyalty of soccer federations from impoverished countries. He has steadily funneled some of FIFA’s enormous cash pile—the total revenues of the organization between 2011 and 2014 came to around $5.7 billion—toward building stadiums and supporting leagues in the developing world. Under his tenure, the World Cup also came to Africa for the first time: in 2010, South Africa hosted the soccer championships, which Blatter aptly referred to on Friday as “the goose with the golden eggs” during one of his rambling speeches.

“While a lot of that is really positive and shouldn’t be dismissed, only a fraction of the money intended for those projects often goes to the right place,” said Forest. Much of it gets siphoned off to corrupt officials in the recipient countries, further encouraging their devotion to FIFA’s incumbent leadership, he said. “It’s a cabal that perpetuates itself.”

European soccer federations have no easy means of dislodging it. Next week, the Union of European Football Associations, which is known as UEFA, will meet again in Berlin to discuss their options against Blatter. There was even speculation at the congress on Friday that the Europeans could split off from FIFA to form a rival organization. But Christensen of Denmark said that won’t happen any time soon. “The 54 members of UEFA will never agree to a boycott,” he said.

Instead they are counting on the arrested FIFA officials to give testimony against Blatter. “There would then be disciplinary actions we could take” inside FIFA in order to unseat the President, Chistensen told TIME. So even though Blatter managed on Friday to win another term, it is far from clear that he will be able to hold on for the duration of his latest four-year term. “No, no, we will not wait that long,” said Koutsokoumnis of Cyprus. “There are ways to get him.”

The clearest way would be another indictment, which the acting U.S. attorney in the Eastern District of New York has promised to produce as the investigation moves forward. “It’s only just beginning,” Kelly Currie said on Wednesday of the arrests so far.

In the coming months, FIFA and its President will still have to deal with the damning allegations that emerge from the ongoing probe. Working with U.S. law enforcement, Swiss authorities have launched a separate investigation into how FIFA allotted Russia and Qatar the rights to host the next two World Cup championships. But even if these criminal cases implicate Blatter directly, or discredit him enough to force his resignation, it is far from clear that FIFA will change.

“You have to understand the structure of FIFA,” said Forest, the investigative journalist. “In one sense it’s a beautiful and pure democracy. A small country like Togo has the same voting power as a country like Germany. But it’s also FIFA’s fundamental weakness.” In practice, it seems to encourage FIFA’s leadership to court the favor of the smallest federations, because they know that with their support, a FIFA President is effectively immune to internal demands for change.

In his parting remarks on Friday, Blatter seemed to signal that this culture would persist. Instead of addressing the corruption scandal directly—he only referred to it as a “storm,” as though it were a natural and temporary bit of turbulence—he promised to give more seats on FIFA’s ruling committee to representatives of Oceania, which is mostly comprised of Pacific Island countries like Fiji. That is what FIFA needs right now, he said, for the sake of “solidarity.”

And as long as Blatter can use such favors to keep the developing world behind him, there is little that the wealthy nations of the world can do to influence his leadership. They may just have to resign themselves to another four years under Blatter, who seemed to feel that his time in office hadn’t lasted all that long. “What is this notion of time? Time is infinite and we slice it up,” the 79-year-old remarked, turning suddenly philosophical as the congress wound down. “The more one ages, the more time flies by quickly, time grows short. So I am with you, and I would quite simply like to stay with you.” And with that, the majority of the audience broke into wild applause. 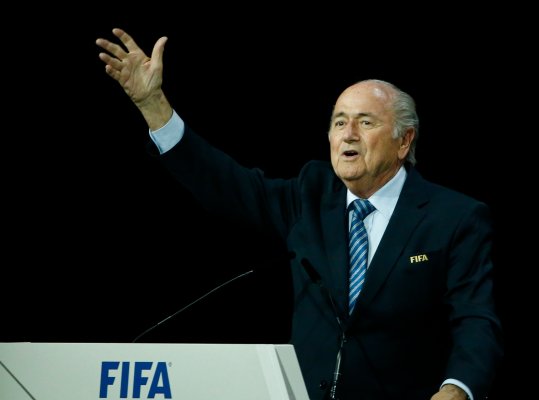