This Is What 'Eggcorns' Are (and Why They're Jar-Droppingly Good)

Eggcorns are a special, productive kind of mistake. They are created when someone mixmatches the letters in a word—or the words in a phrase—but the result still makes sense. In fact, sometimes the messed up version makes even better sense than the original one. An eggcorner might, for instance, use mixmatches instead of mismatches. An eggcorner might assert that something is jar-droppingly good rather than jaw-droppingly. If you’ve ever told someone they’re a “real trooper” or said you’re “chomping at the bit,” then you are an eggcorner, too.

The term eggcorn, coined by British-American linguist Geoff Pullum, hit a milestone this week when Merriam-Webster added it to their unabridged online database. But despite recognition from America’s best-known dictionary, many people continue to mint and recycle eggcorns without ever knowing they’re doing it—or that the action has a name. When corpulent becomes porkulent, that’s an eggcorn. When another think coming becomes another thing coming, that’s an eggcorn. And while fusty rule-followers often treat these as mere idiotic slip-ups, more embracing linguists view them as delightful “reinterpretations” of English.

The name itself is pretty meta, because the word belongs to the category it describes. Back in 2003, some linguists on the blog Language Log were discussing the case of a woman who described an acorn as an “egg corn.” They noted that there was something special about that kind of mishap. After all, acorns are kind of shaped like eggs, and acorns are smaller than eggs just like kernels of corn are. When you think about it, acorns are to trees what eggs are to chickens, and humans for that matter—seeds that spring into new life. It’s not as if she called the “acorn” a “rainstorm” in some classic, just-mixin’-up-two-things-that-sound-alike malapropism.

So Pullum made a suggestion: “that if no suitable term already exists for cases like this, we should call them ‘egg corns.'” And a star was formed.

This week, Merriam-Webster added eggcorn to its unabridged online dictionary, along with about 1,700 other entries. This is their editors’ definition:

The Oxford English Dictionary beat them to the punch, adding this to their ranks in 2010. Their editors described it in a note as a cousin of the mondegreen, a misheard lyric like “All the lonely Starbucks lovers”—which Taylor Swift continues to insist is a mishearing of “Got a long list of ex-lovers.” That name is meta too, coined for Lady Mondegreen, a misinterpretation of the phrase laid him on the green in the fine old ballad “The Bonny Earl of Murray.”

Eggcorns present us with some options for how we treat each other and our language. We can haughtily correct the anxious person who says they’re “chomping” at the bit, explaining that the original phrase is actually “champing” at the bit, for champ has meant to crush and chew by vigorous and noisy action of the jaws since the 16th century. Or we can take a moment to recognize that, to the modern speaker of English, chomp makes a lot more sense than champ—and to appreciate how convenient it is that a once useful idiom can evolve into a currently useful one by the accidental swapping of a vowel.

“That word champ as a verb only really exists now in that particular idiom,” said Ben Zimmer, linguist and executive editor of Vocabulary.com. “We don’t use it in any other context, so that’s a good candidate for reanalysis.” Zimmer is from that more embracing school of linguists who like to observe language rather than snap their ruler and instruct people on how to use something that is in a continual state of makeover. “Of course, with many of these eggcorns, there will be people who say, ‘No, no no, that’s not the way it is,'” he said. “They’ll mention the new form as proof that someone is uneducated. But this is something that we all do with language, whether we’re educated or uneducated … taking forms and relating them to things we already know.”

Zimmer presents the example of free rein, the original version referring to horses with loose reins that allow free motion, and free reign, the eggcorn that evokes the feeling of a ruler who can do whatever he or she might like with their kingdom. He also mentions “real trooper,” which is a corruption of “real trouper,” conjuring the image of an intrepid soldier rather than a dependable member of an acting troupe. Sure, it’s wrong in a sense, but the change is easy to see as more of an improvement than an error.

It’s a subjective exercise calling one thing an eggcorn versus a folk etymology (a popular but mistaken origin of a phrase) or even a malapropism. But the point remains that when all is set and done, eggcorns are better proof of how nimble and sly English is than how dumb anybody is—even though I’ll probably get plenty of polite corrections for the eggcorns sprinkled throughout this very piece. 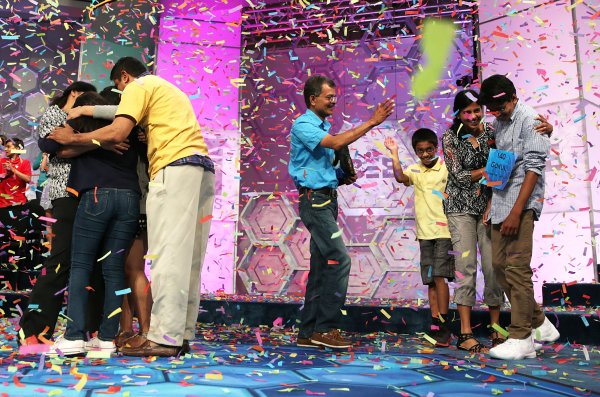 Why South Asian Americans Rule the Spelling Bee
Next Up: Editor's Pick