How a Scandal Made Dennis Hastert the Speaker of the House

Representative Dennis Hastert (C), R-IL, speaks to the media after receiving the nomination for Speaker of the House of Representatives on Capitol Hill in Washington, DC, in January of 1999
Stephen Jaffe—AFP/Getty Images
By Lily Rothman

Prosecutors announced on Thursday that former House Speaker Dennis Hastert was charged with crimes related to bank-transaction reporting and with lying to the FBI. It’s an ignominious turn in the politician’s story, but not his first brush with scandal.

In fact, it was a scandal—one of a very different sort, involving a different person, but a scandal nonetheless—that got him into the Speaker’s seat in the first place.

Hastert officially became speaker at the beginning of 1999, following the tenure of Newt Gingrich. But Hastert was not the first choice to do so. Rather, Bob Livingston, a veteran Congressman from Louisiana who had been a visible figure in 1998’s House preoccupation with the scandal involving President Bill Clinton and Monica Lewinsky, had been chosen by his colleagues for that seat.

At the same time, Hustler publisher Larry Flynt issued a challenge: seeing as Congress was so upset about the President’s personal life, he placed an ad in the Washington Post offering $1 million to any woman who presented evidence that she had had an affair with a high-ranking government official. When several people came forward about Livingston, the Speaker-elect in December 1998 made an announcement to the world: “I have on occasion strayed from my marriage.”

“Livingston gave no details, which left Hustler publisher Larry Flynt to spread around whatever he pleased,” TIME reported. “With no sign of proof, Flynt claimed four women had told his staff about past liaisons with Livingston. Flynt said he has a tape of Newt Gingrich’s erstwhile successor engaging in ‘raunchy’ phone sex.”

Hastert, somewhat reluctantly, stepped up.”[Before] he had even decided he wanted the post, Hastert was already the front runner,” TIME reported. “Outgoing speaker Gingrich, whom Livingston had informed the night before, was buttonholing members on the floor. [Majority Whip Tom] DeLay was harnessing his network of 64 vote counters on behalf of Hastert, who happens to be his chief deputy. Within five hours of Livingston’s announcement, the race was won. ‘It’s over,’ said a senior Republican aide. ‘Denny was the hardest one to convince.'”

Hastert ended up serving in that position until 2007.

Read the full story from 1998, here in the TIME Vault: The Speaker Who Never Was 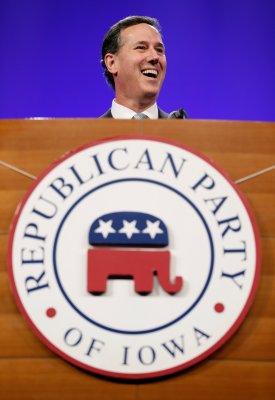 Rick Santorum's Role in the Republican Renewal
Next Up: Editor's Pick