While the company didn’t have any super-surprising reveals, Google’s product roadmap indicates that Android is only going to become more versatile as it enters sectors such as commerce and the smart home. Google is also become more skilled at tying together its disparate services into a single, pleasing user experience, as evinced by the expanded focus on Google Now.

Here’s a quick roundup of the four biggest new announcements Google made Thursday:

Google Now gets even smarter

Google’s sophisticated digital assistant Google Now already offers up curated news, trip reminders, suggested travel routes and other info to make daily life easier. Now the company is expanding its functionality across multiple apps with Now on Tap. When using apps such as music players and email clients, users can simply press the home button or ask Google a question verbally to get context-sensitive answers based on what’s on screen (if your significant other texts you to ask you to pick up laundry, for example, Now on Tap will suggest adding a reminder to your calendar). The new features could give Now a leg up against Apple’s Siri and Microsoft’s Cortana.

After years of tepid response to Google Wallet, the company is taking another shot at mobile payments with Android Pay. The new platform, available later this year in the U.S., will let users load their credit card information onto their phones and then use their phones to pay at physical retailers. The functionality is very similar to Apple Pay, which quickly managed to make a bigger splash than Google Wallet ever did. Android Pay will be available at 700,000 retail stores, including Whole Foods, Macy’s and Walgreens.

Photo storage and organization was one of the best features of Google+. Now Google is bringing that strength to all its users with a new standalone app, Google Photos. Users of the app, available on Android, iOS and the web, will have unlimited photo and video storage. The revamped service also boasts some impressive search features. Users can search by location, objects in the photo (boats, for instance) or even by face. The updated apps rolled out on Thursday.

A new OS for the Internet of Things

Given that Google shelled out billions for smart thermostat company Nest, it’s no surprise that the company is making a power play to control the living room. The company announced Project Brillo, an Android-powered operating system for connected devices, as well as Weave, a common language to let connected Brillo devices communicate. Brillo will support both Wi-Fi and Bluetooth, giving developers multiple ways to let users connect. 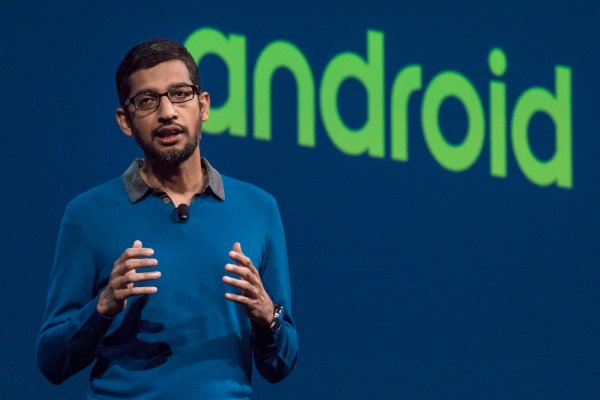 Google Is Bringing Virtual Reality to the Classroom
Next Up: Editor's Pick