After nearly a year of air strikes led by the U.S. and ground attacks by the U.S.-trained Iraqi army, the Islamic State of Iraq and Greater Syria (ISIS) is proving to be a far more cagey and cunning foe than the Pentagon ever expected. A big reason for its success is the George W. Bush Administration’s decision to disband the Iraqi army shortly after the 2003 invasion—without the knowledge or consent of either the Pentagon or President.

It’s a jarring reminder of how a key decision made long ago is complicating U.S. efforts to fight ISIS and restore some semblance of stability to Iraq. Instead of giving Iraq a fresh start with a new army, it helped create a vacuum that ISIS has filled. Anthony Zinni, a retired Marine general and chief of U.S. Central Command from 1997 to 2000, said keeping the Iraqi army intact was always part of U.S. strategy. “The plan was that the army would be the foundation of rebuilding the Iraqi military,” he says. “Many of the Sunnis who were chased out ended up on the other side and are probably ISIS fighters and leaders now.” One expert estimates that more than 25 of ISIS’s top 40 leaders once served in the Iraqi military.

General Ray Odierno, the Army chief of staff, says the U.S. could have weeded Saddam Hussein’s loyalists from the Iraqi army while keeping its structure, and the bulk of its forces, in place. “We could have done a lot better job of sorting through that and keeping the Iraqi army together,” he told TIME on Thursday. “We struggled for years to try to put it back together again.”

The decision to dissolve the Iraqi army robbed Baghdad’s post-invasion military of some of its best commanders and troops. Combined with sectarian strains that persist 12 years later, it also drove many of the suddenly out-of-work Sunni warriors into alliances with a Sunni insurgency that would eventually mutate into ISIS. Many former Iraqi military officers and troops, trained under Saddam, have spent the last 12 years in Anbar Province battling both U.S. troops and Baghdad’s Shi’ite-dominated security forces, Pentagon officials say.

“Not reorganizing the army and police immediately were huge strategic mistakes,” said Jack Keane, a retired Army vice chief of staff and architect of the “surge” of 30,000 additional U.S. troops into Iraq in 2007. “We began to slowly put together a security force, but it took far too much time and that gave the insurgency an ability to start to rise.”

The U.S.-ordered dissolution of the Iraqi army was a major error. But it was compounded by former Shi’ite Prime Minister Nouri al-Malaki’s wholesale firing of Sunni commanders in favor of more compliant, if less competent, Shi’ites during his 2006-2014 tenure. That turned what was supposed to have been a national army into little more than a sectarian militia that took orders from the Prime Minister’s inner circle. “Malaki went into that army and pulled out all of its distinguished leaders, whose guys were devoted to them, and put in these cronies and hacks,” Keane said. “And those guys pocketed the money that was supposed to be used for training.”

So how did the Iraqi army come to dissolve? The Bush Administration tapped Paul Bremer to head the so-called Coalition Provisional Authority on May 11, 2003. Twelve days later, he issued an order wiping away the Iraqi military, with a pledge to build a new one from scratch, untainted by any ties to Saddam’s regime. The army’s end quickly led to civil unrest, a growing insurgency and a U.S. occupation that would last eight years and cost the lives of 4,491 American troops.

Bremer’s decision to disband the Iraqi army has been shrouded in mystery. James Pfiffner, a professor of public policy at George Mason University and an Army veteran who served in Vietnam, conducted one of the most detailed autopsies into the decision. “President Bush had agreed with military planners that the Army was essential for the internal and external security of the country,” Pfiffner wrote in the professional journal Intelligence and National Security in 2010. “When asked in 2006 by his biographer…about the decision, Bush replied ‘Well, the policy was to keep the army intact. Didn’t happen’.” Pfiffner suggests the decision made by Bremer actually came from Vice President Dick Cheney. (“It may have been a mistake,” Cheney said in 2011 without confirming it was his decision.)

Over the past year, ISIS has seized hundreds of U.S.-built Iraqi military vehicles given to Baghdad by the U.S. government. But history shows that the U.S., beyond providing ISIS with war machines, also made a fateful decision that gave ISIS some of its best commanders and fighters. 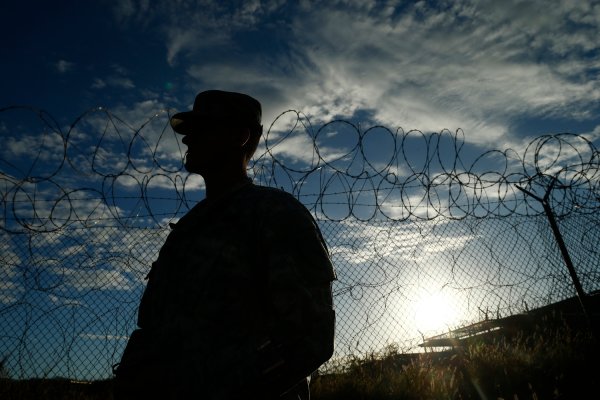 No More Outside Food for Guantánamo Inmates
Next Up: Editor's Pick