Ester Dean: Songwriting Is ‘Kind of Like Having Sex’

Ester Dean arrives at the Los Angeles premiere of 'Pitch Perfect 2' on May 8, 2015.
Axelle/Bauer-Griffin--FilmMagic/Getty Images
By Eliza Berman

Ester Dean is like the baking soda in a cake. You might not know it’s there, but without it, the whole thing just falls apart. For years, Dean has been writing hit songs for artists like Rihanna, Nicki Minaj and Chris Brown, but to the casual listener, she’s yet to become a household name. Case in point: A few demos she cut for songs that later became major hits found their way onto YouTube, where some commenters opined that the “original version” was better—unaware that a song doesn’t get any more original than Ester Dean herself.

But whatever anonymity Dean might once have enjoyed has eroded since she became one of Pitch Perfect‘s singing Bellas. Whereas her earliest film credits were voiceover roles (in Rio and Ice Age: Continental Drift), her turn as Cynthia-Rose Adams opposite Anna Kendrick and Rebel Wilson has made her face nearly as recognizable as the hits she churns out.

Between promoting Pitch Perfect 2 and dropping her first solo EP, it’s been a busy spring for Dean. She took a break to talk to TIME about her songwriting process, what she thought of a capella before Pitch Perfect and what it’s like for people to finally get to know the real Ester Dean.

TIME: Which came first for you, singing or songwriting?

Ester Dean: Singing came first because all my family can sing. We were in the middle of Tulsa, Okla. My mom sang gospel, and we went on the road with her. The writing was something I did as a bored child. I wanted to be an artist, and if you wanted to sing, you had to write your own songs. So that became way more important than singing.

Was it unexpected that you ended up writing songs for other artists?

I wanted to hear myself on the radio, but I realized that being an artist had a little more to it. It wasn’t just being able to sing. People told me I needed to look like Christina Milian or Mya. It discouraged me because they automatically said the way I looked wasn’t good enough even though I had a good voice. When I started selling songs, I didn’t mind because I didn’t like what [the music industry] stood for anymore.

When you go into the studio to write a song, do you already have in mind who you’re writing it for?

I’ve always written songs for myself. I’ve never started writing for other people unless somebody literally puts me in the studio for Rihanna. I’m just writing what I feel and my own story. Nicki [Minaj] and I clicked because I was writing songs about love in my life, and we [felt] connected through the same thing. That’s how songs work—it’s all about if that person is living the same truth as you.

If I were a fly on the wall in your studio, what would I observe?

You would fall off the wall out of boredom! I don’t allow any flies on the wall because it’s such an intimate place. It’s kind of like having sex—you don’t want anyone watching. I have the coffee full of hazelnut cream and my dog looking at me crazy, like hopefully you get a hit so you can get me a bone.

Did you ever write a song that you were sure was going to be a smash, and then it flopped?

All of them! I thought everything was going to be even bigger than it was. “Firework” [written for Katy Perry] was something that I didn’t know was going to be that big.

What’s it like for millions of people to know every word to “Firework” but not know that you wrote it?

Is it strange that people know you from Pitch Perfect but they don’t necessarily know you’ve written all these hit songs?

I’m just part of a machine. It’s like a stylist or a make-up artist for Rihanna. Her brand is her brand because she knows how to pick a song, she knows how to do a show. I’m a part of the success. But when they see me, I love that they know me for me. I don’t want them to know me for a Rihanna song. It wouldn’t mean anything.

Before Pitch Perfect, what was your stance on a capella?

I had no clue about it. I though a capella would be like [gospel sextet] Take 6. The a capella I knew was just singing, not using your voice as the music. The a capella we’re doing is crazy. How do you make the sound of a snare and a synth? It’s really technical.

Do you have the acting bug now?

Do you ever sleep?

I sleep four hours a day. If I get five hours I’m kind of ticked off. You know how people say they have 24 hours in a day? I really don’t believe that, because if I stay up for two days, I really have a 48-hour workday.

What are your goals for the next year?

I hope to have five songs on the Hot 100 and two big movies. Small things.

Is there an artist you really want to hear singing your song?

I want to give a number one to all the divas I haven’t had a number one with. One of those people is J. Lo, another is Mariah Carey, another is Beyoncé. I really wish I could work with Celine Dion, Christina Aguilera. If I could do one of those songs that’s got Beyoncé, Patti Labelle, Aretha Franklin, Taylor Swift, Katy Perry—an all-girl number one smash—I would be done. I could just pack up my bags. 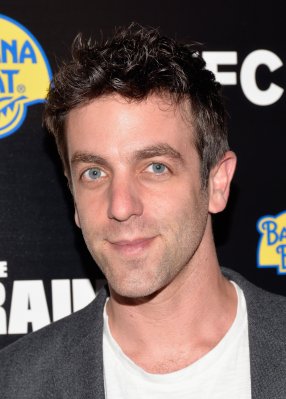 B.J. Novak Signs On for McDonald's Movie
Next Up: Editor's Pick