Meet the Prince Who Wants to Save Soccer

With FIFA’s 209 members set to vote Friday in Zurich on who should run the scandal-ridden global soccer authority, the prospect of ending the 17-year rule of FIFA President Sepp Blatter rests on just one unlikely person: A soft-spoken royal half his age, who has never played professional soccer or managed a FIFA club, and who was still a student at Princeton University when Blatter began his first term in office.

Jordan’s Prince Ali Bin Hussein, 39, looked a long shot to deprive Blatter of a fifth term atop FIFA when he launched his campaign in January, saying he wanted to end decades of endemic corruption within FIFA and turn it into “a first-class organization that is worthy of a sport that unites billions of people around the globe.”

Prince Ali still faces an uphill battle in Friday’s vote, despite the arrests of seven top FIFA executives on Wednesday on charges of money laundering and racketeering. In a day that left FIFA and the soccer world in turmoil, police stormed the officials’ five-star hotel rooms in Zurich before dawn, just as the U.S. unsealed indictments against them and seven others—and as Swiss police raided FIFA headquarters in the city. The U.S. charges detail decades of kickbacks and bribes worth some $150 million, while the Swiss investigation concerns suspected bribes around the 2018 and 2022 World Cup hosting rights, awarded to Russia and Qatar, respectively.

Despite the volcanic events at FIFA this week, Blatter made it clear on Thursday that he had no intention of resigning, and in fact looks set to win another four-year term. That is in large part because of a voting system that heavily favors Blatter—in fact, this is the first time since 2002 that anyone has challenged him for the seat. Each member-country has an equal vote in the FIFA presidential election, whether they are sporting giants like the U.S. or Brazil, or one of the dozens of poor, soccer-addicted nations to which FIFA dispenses millions for sporting facilities; Africa, for example, has 54 votes, and most of its members are expected to back Blatter. “People are always trying to knock Blatter,” Guinea Bissau’s soccer chief Nascimento Lopes told Inside World Football on Thursday. Labeling the opposition against Blatter “blasphemy,” he asserted, “Africa will vote for Mr. Blatter and I will follow that.”

Yet despite Blatter’s probable victory, Prince Ali has in some ways already won big. Through four months’ campaigning, the former parachutist in the Jordanian military has shifted perceptions about what kind of leader FIFA might have—if not, perhaps, as a result of Friday’s vote. (On Thursday, the president of U.S. Soccer acknowledged America’s delegate would cast a ballot for the royal, not Blatter.)

Prince Ali’s election manifesto—an unknown concept for FIFA—promises to transform FIFA into “a service organization and a clear leader in good governance” and to plow its mammoth profits into improving soccer organizations in the neediest countries. That includes quadrupling the annual funds that FIFA dispenses to each of its member associations, from $250,000 to $1 million, an easily affordable sum for the organization, whose financial statement released earlier this month showed its revenues between 2011 and 2014 totaled about $5.7 billion.

His proposals for FIFA entail a drastic shake-up in its management practices, including regular and open accounting of its finances, and he argues that he has the credentials to oversee it.

Born in 1975, Prince Ali is the son of Jordan’s late King Hussein and the younger brother of its current King Abdullah. Like many royals from the Middle East, he attended Britain’s Sandhurst Military Academy before Princeton. In 2004, he married a former CNN correspondent, Rym Brahimi, and the couple has two children. He has served as president of Jordan’s Football Association for 16 years, and for the past four years has been one of FIFA’s seven Vice Presidents; two other FIFA veeps were among those arrested Wednesday. He has also been a member of FIFA’s executive committee for the past four years, although he says he will abandon that position if Blatter is elected a fifth term. “I honestly believe I could not be a member of the executive committee under the circumstances for the next four years,” he told CNN in March. “I will not run.”

Throughout his campaign, Prince Ali has appeared unafraid to make enemies—and enemies he has made. He clashed earlier this month in Bahrain, with that country’s Shaikh Salman, who is a close Blatter ally and who heads the Asian Football Confederation. A day before Wednesday’s arrests, he revealed that back in April an unnamed person offered to deliver 47 votes for him in Friday’s ballot—for a price—and to disclose details of Blatter’s personal finances, which had apparently been illegally obtained. Rather than seize on a possible advantage in the vote, Prince Ali reported the incident to law enforcement officials.

All of that has gained Prince Ali powerful fans. Last week, the Dutch football federation president Michael Van Praag and the Portuguese football star Luís Figo both dropped their bids to be voted FIFA president, saying they were throwing their efforts behind Prince Ali instead, in what seemed designed as a strategic move to unseat Blatter. On Thursday, the football federations of Australia, Wales and Britain all said they would vote for Prince Ali.

Michel Platini, president of Europe’s powerful football federation UEFA—which does not have a vote but whose high-performing members have considerable prestige with FIFA—also backed Prince Ali. “He knows perfectly the workings of the institutions but has not yet had time to be crushed or deformed by them,” Platini told the French sports paper L’Equipe. “He has great freedom of mind and independence that make its strength.” That spirit might well have infected some of FIFA now, even if Prince Ali loses on Friday, which looks likely. Once this week’s tumultuous events have passed, UEFA and others will consider their options—including perhaps boycotting FIFA events, a decision that could leave this multibillion-dollar empire atop a Zurich hillside severely battered. 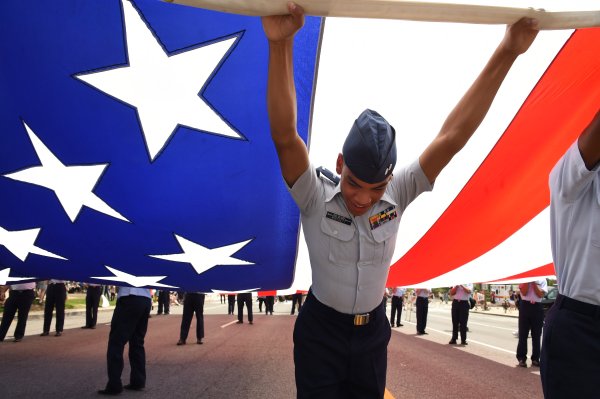 5 Reasons Why the U.S. Remains the Only Superpower
Next Up: Editor's Pick