Major FIFA Sponsors Don't Want to Talk About Qatar, Either

Brazuca match balls for the FIFA World Cup 2014 lie in a rack in front of the adidas logo on December 6, 2013 in Scheinfeld near Herzogenaurach, Germany.
Lennart Preiss—Getty Images for adidas
By Sean Gregory

After Wednesday’s news that the U.S. government indicted top soccer officials on charges of racketeering, wire fraud, and money laundering, FIFA’s corporate sponsors expressed concern, saying they were monitoring the situation. They did their predictable finger-waving.

“Our sponsorship has always focused on supporting the teams, enabling a great fan experience, and inspiring communities to come together and celebrate the spirit of competition and personal achievement,” Visa, one of FIFA’s parters, said in a statement. “And it is important that FIFA makes changes now, so that the focus remain on these going forward. Should FIFA fail to do so, we have informed them that we will reassess our sponsorship.”

But companies like Visa should have reassessed their FIFA sponsorship long before the arrests. Because while the scale of the alleged corruption — over $150 million in bribes and kickbacks, according to the Justice Department — is shocking, another scandal has been brewing for years now. And this one involves the loss of many lives.

In December 2010, FIFA awarded the 2022 World Cup to Qatar, a tiny, oil-rich Gulf state with little existing World Cup infrastructure and a dangerously hot climate, for both players and the thousands of migrant workers that have been needed to built the World Cup edifices. As a result, a humanitarian crisis has unfolded. According to a March 2014 report from the International Trade Union Confederation, 1,200 World Cup workers from Nepal and India have died in Qatar since 2010. The ITCU estimates that 4,000 workers could die before the 2022 World Cup kicks off. The Washington Post, drawing on multiple sources, created a graphic comparing World Cup worker deaths in Qatar with fatalities associated with other major sporting events, like the 2012 London Olympics, the 2014 Sochi Olympics and the 2014 World Cup in Brazil. The differences are stunning.

On top of that, the Nepalese labor minister recently told The Guardian that many World Cup migrants from Nepal have not been permitted to return home from Qatar to mourn family members killed in the April 25 earthquake, which claimed over 8,000 lives.

So FIFA’s most galling corruption isn’t directly connected to the headline-grabbing U.S. indictments. (Yesterday, the Swiss government announced it has launched a criminal investigation into the bid process for both the 2018 World Cup in Russia and the 2022 Cup in Qatar). If anything, the publicity surrounding the arrests will shine further light into the Qatar crisis.

And what do Visa and other sponsors have to say about Qatar? Not a whole lot.

TIME reached out to six companies listed in FIFA’s “2015-2022 sponsorship portfolio:” FIFA partners Adidas, Coca-Cola, Hyundai/Kia and Visa, and World Cup sponsors Anheuser-Busch InBev and McDonald’s. We did not seek comment from the seventh sponsor, Russian gas giant Gazprom, whose sponsorship is listed as “2018 only” — connected with the World Cup in Russia. We asked each of them: “how can your company support an organization that is staging an event in Qatar, a place where a humanitarian crisis has unfolded during World Cup preparations, a place where, according to one report, at least 1,200 people have died during World Cup preparations, a place where migrant workers were reportedly not allowed to go home to mourn earthquake victims in Nepal?”

No company made any executive available to answer this question. TIME directly emailed the question to John Lewicki, head of global alliances for McDonald’s and Lucas Herscovici, vice president consumer connections (media, digital, sports & entertainment) at Anheuser-Busch InBev. Neither executive directly responded. We got a flurry of statements. A Visa rep directed TIME to the statement it posted Wednesday in response to the arrests. “Our disappointment and concern with FIFA in light of today’s developments is profound,” the statement said, in part. “As a sponsor, we expect FIFA to take swift and immediate steps to address these issues within its organization. This starts with rebuilding a culture with strong ethical practices in order to restore the reputation of the games for fans everywhere.” When we pointed out that that statement was not specific to the loss of life in Qatar, the rep directed us to an earlier statement, released May 19. “We continue to be troubled by the reports coming out of Qatar related to the World Cup and migrant worker conditions. We have expressed our grave concern to FIFA and urge them to take all necessary actions to work with the appropriate authorities and organizations to remedy this situation and ensure the health and safety of all involved.”

An Adidas rep sent along a statement: “The adidas Group is fully committed to creating a culture that promotes the highest standards of ethics and compliance, and we expect the same from our partners. Following today’s news, we can therefore only encourage FIFA to continue to establish and follow transparent compliance standards in everything they do. adidas is the world’s leading football brand and we will continue to support football on all levels.” This statement, too, is a response to the arrests, not our Qatar question. We pointed this out to Adidas. A spokesperson said this was the company’s standing response.

More than 20 hours after this story was published, Adidas sent another statement: “The adidas Group is committed to ensuring fair labour practices, fair wages and safe working conditions in factories throughout our global supply chain. These active efforts are guided by our core values as a company as well as by our Workplace Standards – contractual obligations under the manufacturing agreements the adidas Group signs with its main business partners. The Workplace Standards are based on the International Labour Organization’s (ILO’s) core labour rights conventions.

“We are in a constant dialogue with our partner FIFA and know that FIFA has repeatedly urged the Qatari authorities to ensure decent conditions for migrant workers in the country. There have been significant improvements and these efforts are ongoing; but everyone recognizes that more needs to be done in a collective effort with all stakeholders involved.”

A Hyundai representative also did not answer the question directly, saying through a statement, “as a company that place the highest priority on ethical standards and transparency, Hyundai Motor is extremely concerned about the legal proceedings being taken against certain FIFA executives and will continue to monitor the situation closely.” A Kia official said in a statement: “Kia Motors takes seriously any reports concerning the poor treatment of migrant workers involved in the construction of venues for the 2022 FIFA World Cup. It is our understanding that FIFA and related authorities are taking immediate steps to secure appropriate standards of welfare for all workers involved in these projects, and we will continue to monitor developments in Qatar very closely.” Hyundai is the parent company of Kia.

The statement from McDonald’s: “McDonald’s is committed to doing business around the world in a manner that respects human rights. We have expressed our concerns to FIFA regarding human rights issues in Qatar and know they are working with local authorities to address those concerns.”

Coke: “The Coca-Cola Company does not condone human rights abuses anywhere in the world. We know FIFA is working with Qatari authorities to address specific labor and human rights issues. We expect FIFA to continue taking these matters seriously and to work toward further progress. We welcome constructive dialogue on human rights issues, and we will continue to work with many individuals, human rights organizations, sports groups, government officials and others to develop solutions and foster greater respect for human rights in sports and elsewhere.”

Anheuser-Busch InBev: “We expect all of our partners to maintain strong ethical standards and operate with transparency, and are committed to business practices that do not infringe on human rights. We continue to closely monitor the situation through our ongoing communications with FIFA, including developments in Qatar.”

“It’s very bad business right now to be associated with FIFA,” says Ben Sturner, president and CEO of Leverage Agency, a sports marketing firm. “The Qatar situation is going to force more sponsors away. They have to go away. It’s the humane thing to do.” Do iconic brands like McDonald’s, Coke, and others really feel this way?

If so, they aren’t saying. 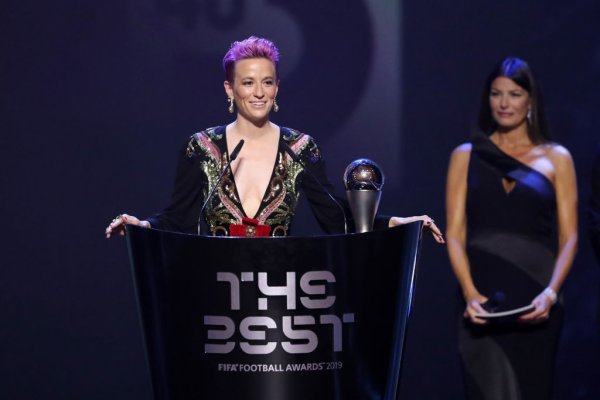 Megan Rapinoe Wins FIFA Women's Player of the Year, Calls for Players Around the World to Fight Inequality
Next Up: Editor's Pick