Futuristic buildings will be connected by glass walkways, according to designs recently released by the company.

It will be the eighth move for Uber, according to the Chronicle.

Here are a couple more images of the designs:

This rendering shows a restored natural habitat around Permanente Creek, near the proposed Landings project. You can’t tell, but a consolidated parking structure is hidden below this landscaped garden. By consolidating parking, traffic congestion is reduced in the area, making it safer and more attractive for people to walk and bike.
dbox/Google

This rendering shows the entry lobby of the proposed Landings building. Consolidated parking sits below the building, helping us reach our goal of Net-Zero parking. Once at Landings, visitors can easily connect to the rest of campus through one of several walking and biking paths.
dbox/Google

This rendering shows the west side of the proposed Shoreline building. The canopies along Shoreline Boulevard open onto a public plaza with retail spaces. Along the street, buildings are 2 or 3 stories, with taller areas toward the center of the structures.
dbox/Google 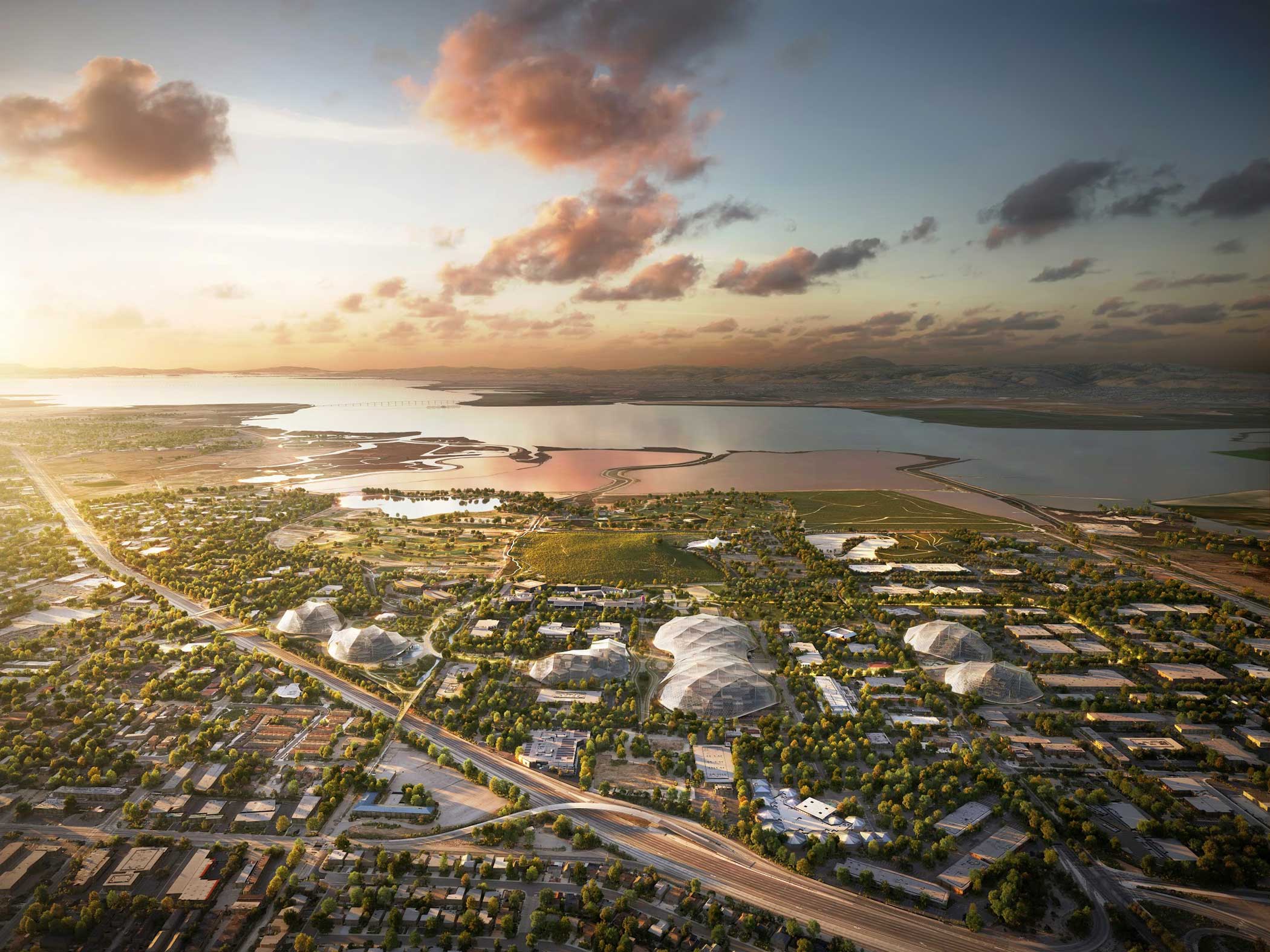 In this rendering, Huff Avenue is transformed into a soft grid for pedestrians and bikes. The building’s translucent canopy lifts up to allow the public Green Loop to go through the center of the building, with cafes and local shops on the lower levels.
dbox/Google 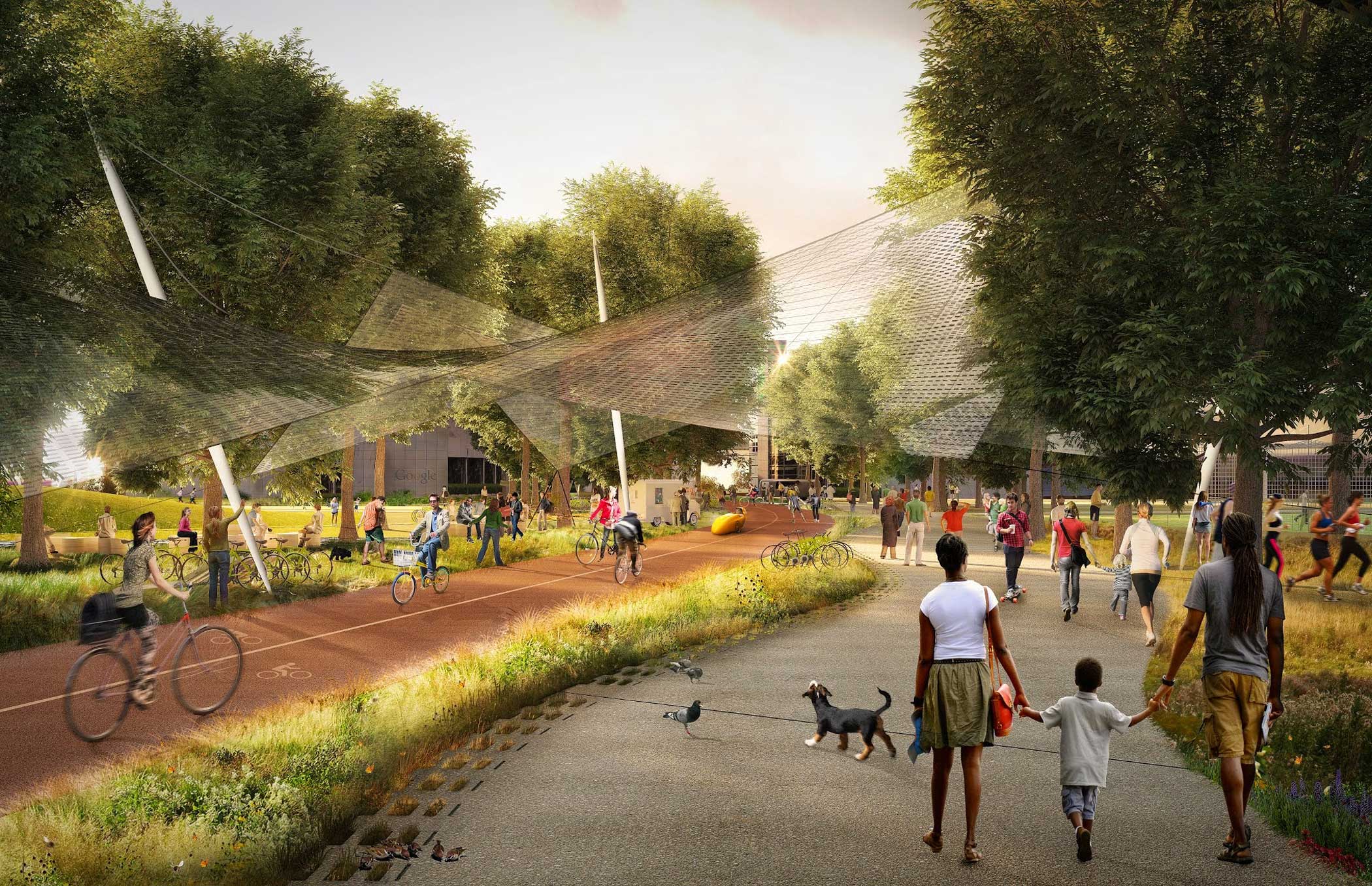 Mountain View’s Precise Plan encourages the creation of a diverse network of public and private open spaces such as plazas, parks and trails. This rendering shows the Green Loop, a circuit for bikes and pedestrians that weaves through urban and natural areas. A solar canopy produces energy and also protects bicyclists from the rain.
dbox/Google 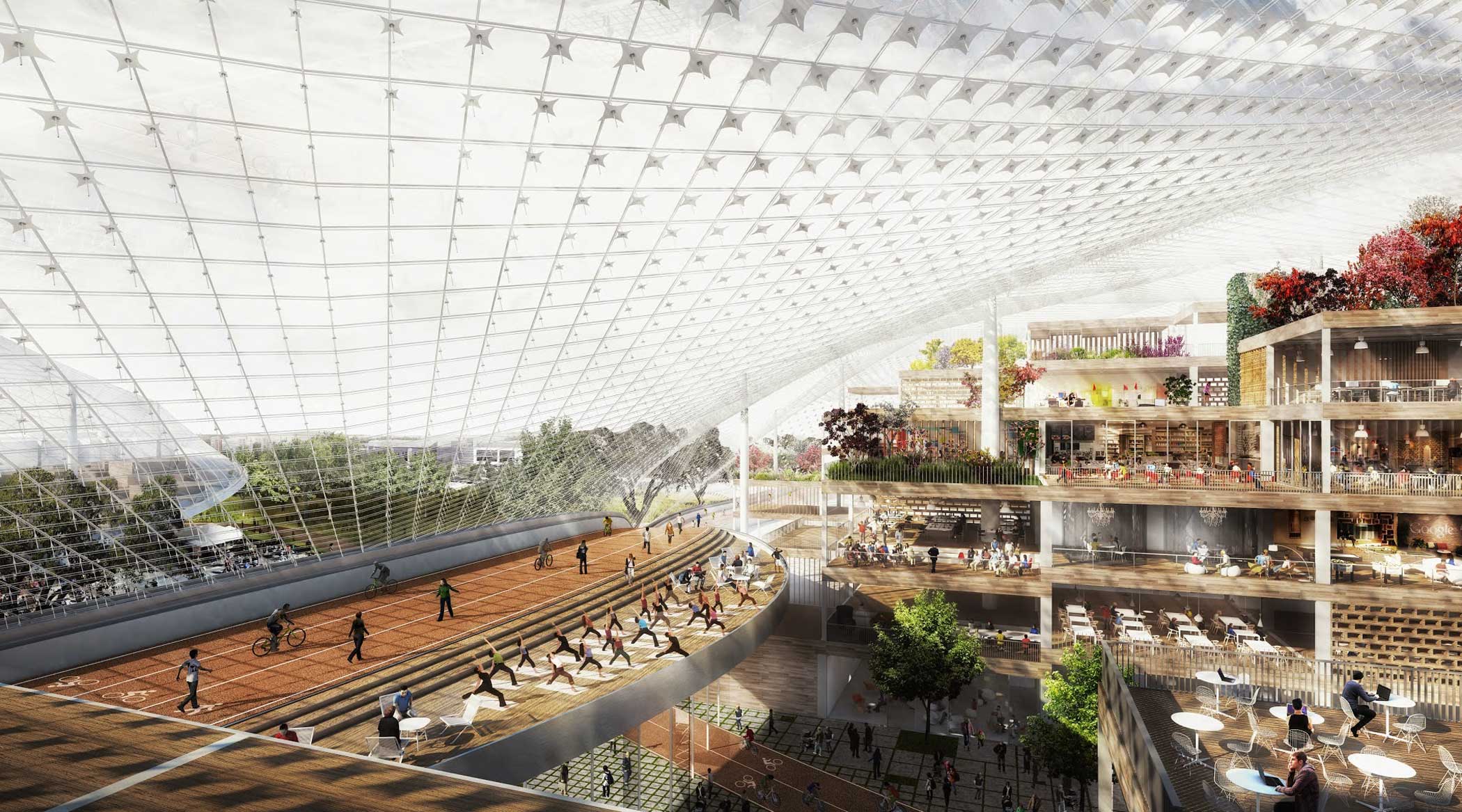 This rendering shows the inside of the proposed Charleston South building looking west. Within the canopy, building segments operate like furniture—light, tactile and reconfigurable. These segments form small villages where employees can work or relax. The Green Loop goes through the building. The rim of the canopy provides structure as well as biking and walking paths.
dbox/Google 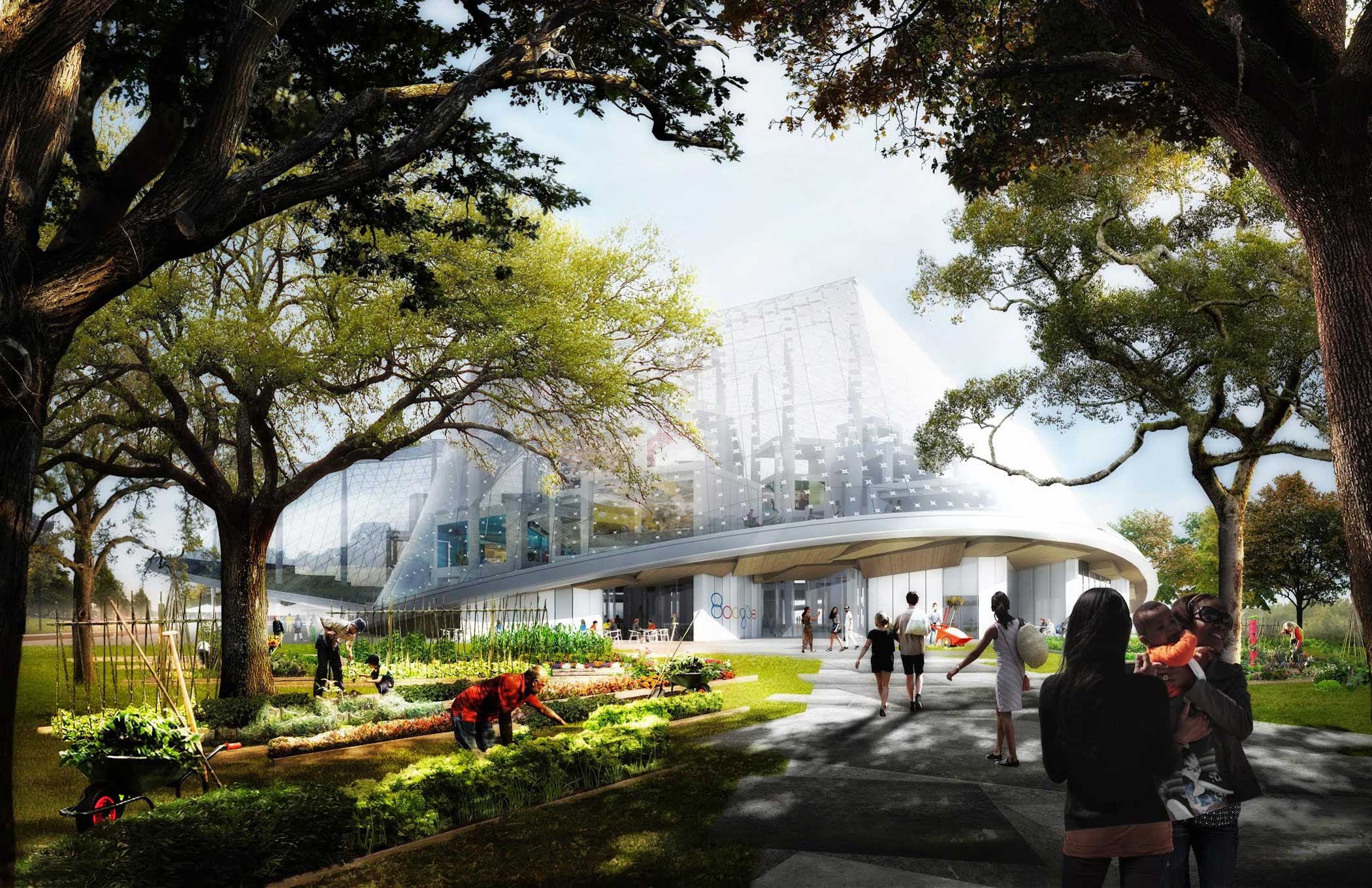 This rendering shows the west side of the proposed Huff project. At ground level, the environment is newly restored. Employees will be drawn from offices to the outdoors, to work alongside waterways and under trees. Mountain View residents can walk or ride along green corridors, eat at cafes, shop, play in parks, or work in the public community gardens.
dbox/Google 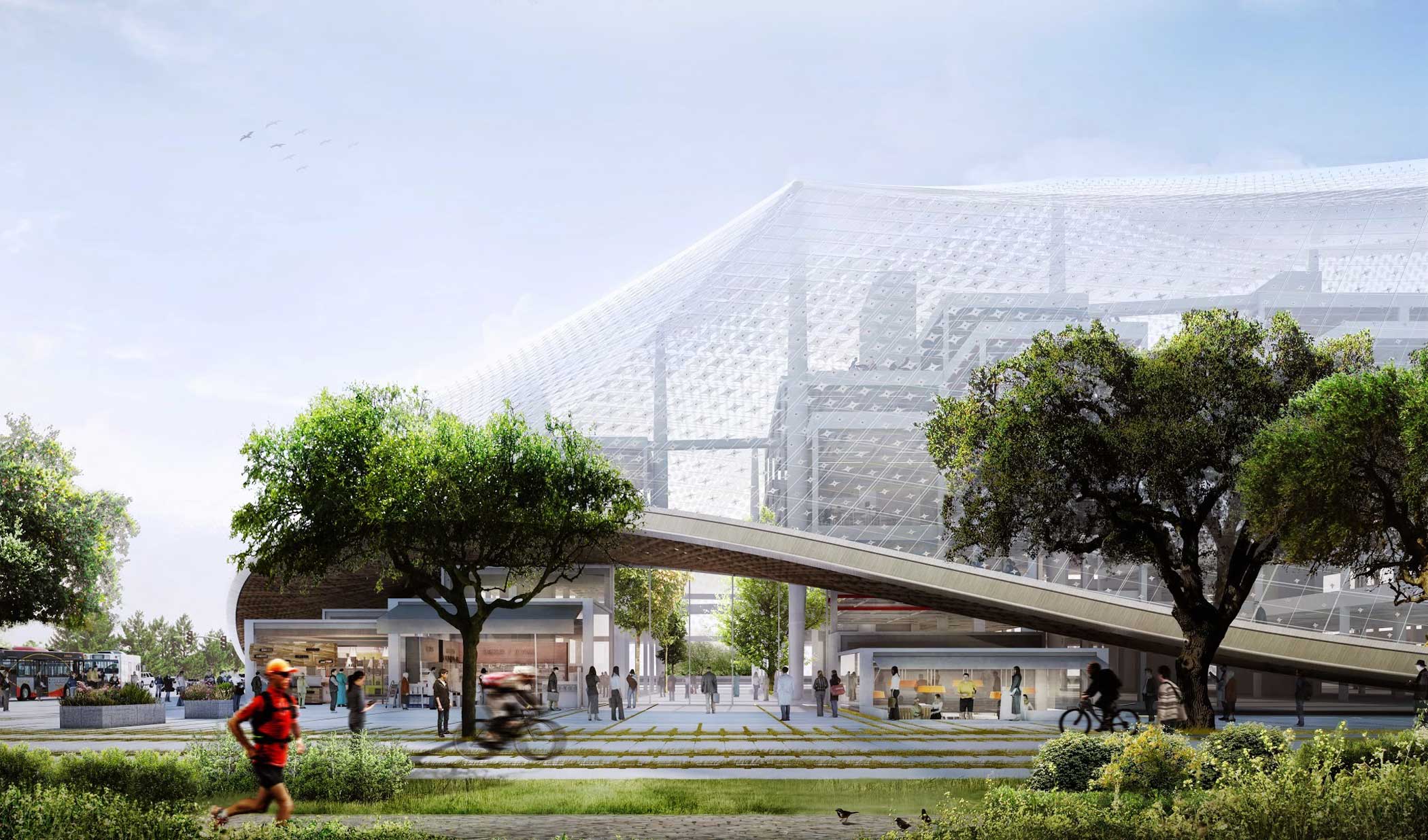 This rendering shows the northwest corner of the proposed Charleston South building. Large, translucent enclosures blur the boundaries between inside and out. These canopies regulate climate, pollution, and sound, while freeing spaces from traditional architectural limitations like walls, windows and roofs. Cafes and local shops on the lower levels open into interior open walkways under the canopy.
dbox/Google 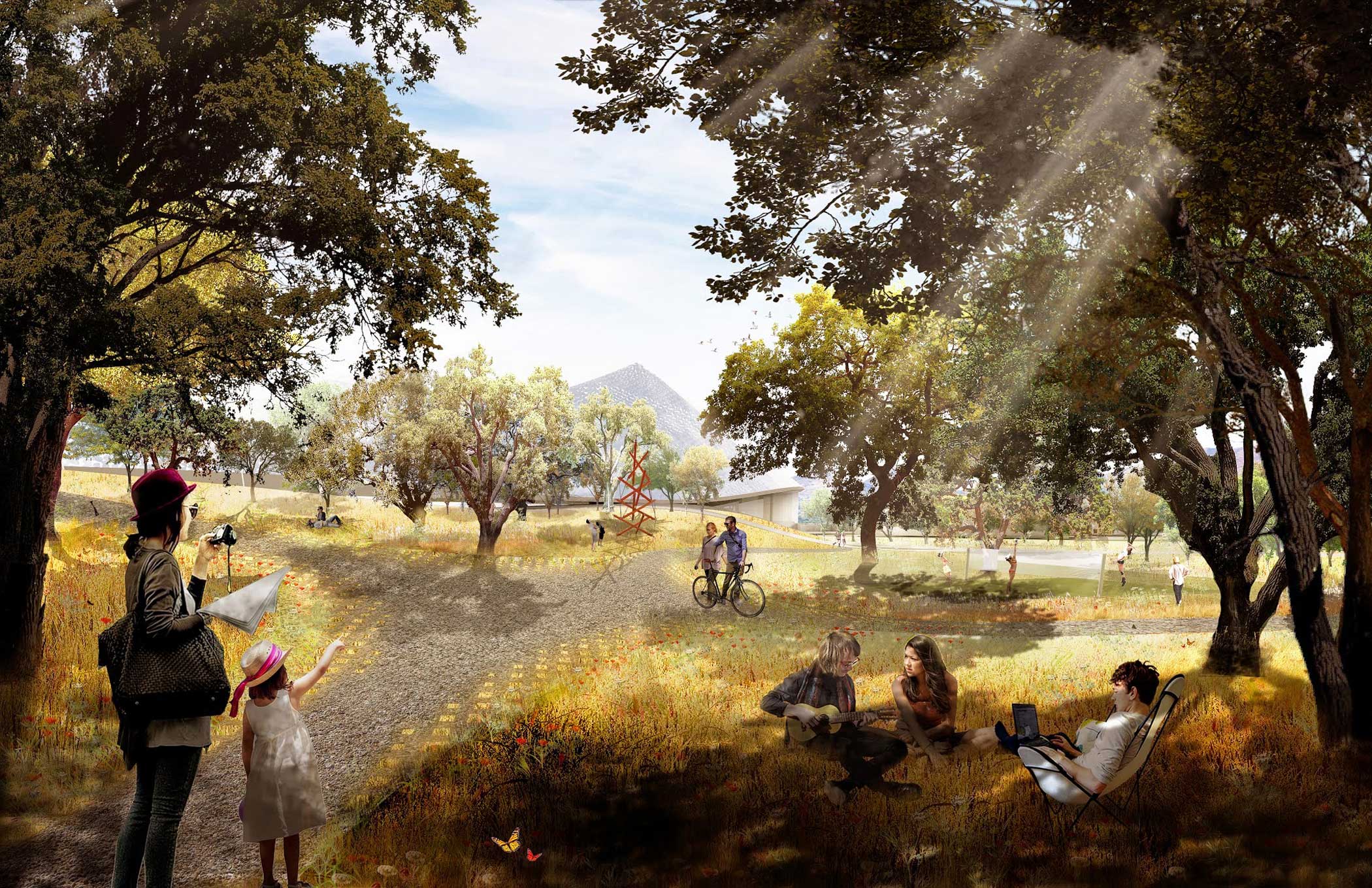 This rendering shows the northern half of the proposed Landings project. In place of parking lots and other underutilized sites, we will establish revitalized native ecosystems, including re-oaking and wetlands.
dbox/Google
1 of 10
Advertisement