Madeleine Albright: Why Change in Nigeria Matters to the World

Nigeria's new President Muhammadu Buhari rides in a motorcade while inspecting the guard of honour before his inauguration at Eagle Square in Abuja, Nigeria on May 29, 2015.
Afolabi Sotunde—Reuters
By Madeleine Albright and Johnnie Carson

This week, something unprecedented is happening in Africa’s most populous country, where groundbreaking political change is underway. Nigeria’s incumbent president will step down and a new president from another political party, Muhammadu Buhari, will be sworn in.

The March election that brought Mr. Buhari to office was a political triumph for Nigeria and a positive step for the future of democracy in sub-Saharan Africa. Few expected that the election would be peaceful or credible, but the Nigerian people demanded nothing less.

As one of us witnessed first-hand while serving on a National Democratic Institute election observer delegation, people across Nigeria waited in lines that stretched for hours simply to have their voices heard through the ballot box. Thousands were willing to risk the threat of election violence to volunteer as citizen observers, and the outcome was seen as legitimate thanks in large measure to the work of the Independent National Electoral Commission, which oversaw the rapid release of election results. A coalition of 400 civic organizations conducted a parallel vote tabulation that protected the integrity of the process and promoted confidence in the official results; other groups conducted a large-scale, and effective anti-violence campaign.

Why NATO Is Essential For World Peace, According to Its Former Commander

The election was not perfect, far from it. Although it confirmed the eventual outcome of the elections, the parallel vote tabulation exposed serious vote count manipulation in one of the six geopolitical zones of the country. Pockets of serious violence and fraud did occur, especially in Nigeria’s politically critical, oil-producing southern states. Yet overall, the 2015 election was the most successful democratic exercise in the country’s history, building on the progress made in 2011 after a series of seriously flawed elections in the country.

Now President-elect Buhari’s challenge will be to deliver for his people—because years of experience have taught us that while successful elections are necessary, they are not by themselves sufficient for a country to achieve real long-term economic and social progress. Put another way: People like to vote, but they also like to eat.

After campaigning as the anti-corruption, pro-security candidate, Buhari now has a big job to do if he is to capitalize on the new momentum for change. To succeed, he will need the support of the international community—which must stay engaged in helping Nigeria along the path of progress.

The stakes could not be greater, both for Nigeria and the world. With a population of roughly 180 million people and an economy expected to reach $1 trillion by 2030, the country is already a regional political and economic powerhouse—and it is increasingly a global one as well. By 2050, Nigeria’s population is expected to surpass that of the United States, and its total population is projected to reach 900 million by the end of this century. This means that what happens in Nigeria will have a profound impact on the future of sub-Saharan Africa and the world.

To put the country on a road to better governance, increased security, and greater prosperity, President Buhari will need to bring Nigeria’s vast resources together to tackle a series of deep-seated, interconnected challenges—and he will need the support of the United States and its partners to do so.

His first order of business should be dealing with the country’s rampant corruption, a poison in any democracy. Buhari campaigned on a promise to address alleged multibillion dollar corruption scandals, which stem largely from mismanagement of the country’s oil reserves. These kinds of scandals weaken Nigeria’s legitimacy both domestically and abroad. Its oil reserves are tremendous, but if mismanaged they threaten to undermine the country’s political authority. Corruption must be addressed at the institutional level by strengthening institutions such as the electoral commission, National Assembly, political parties and civil society—all of which have an important role in addressing corruption. Another priority will be improving the transparency of government bodies, such as the Nigeria National Petroleum Corporation. The international community should also support the recovery of stolen assets, which belong in the hands of the Nigerian people. 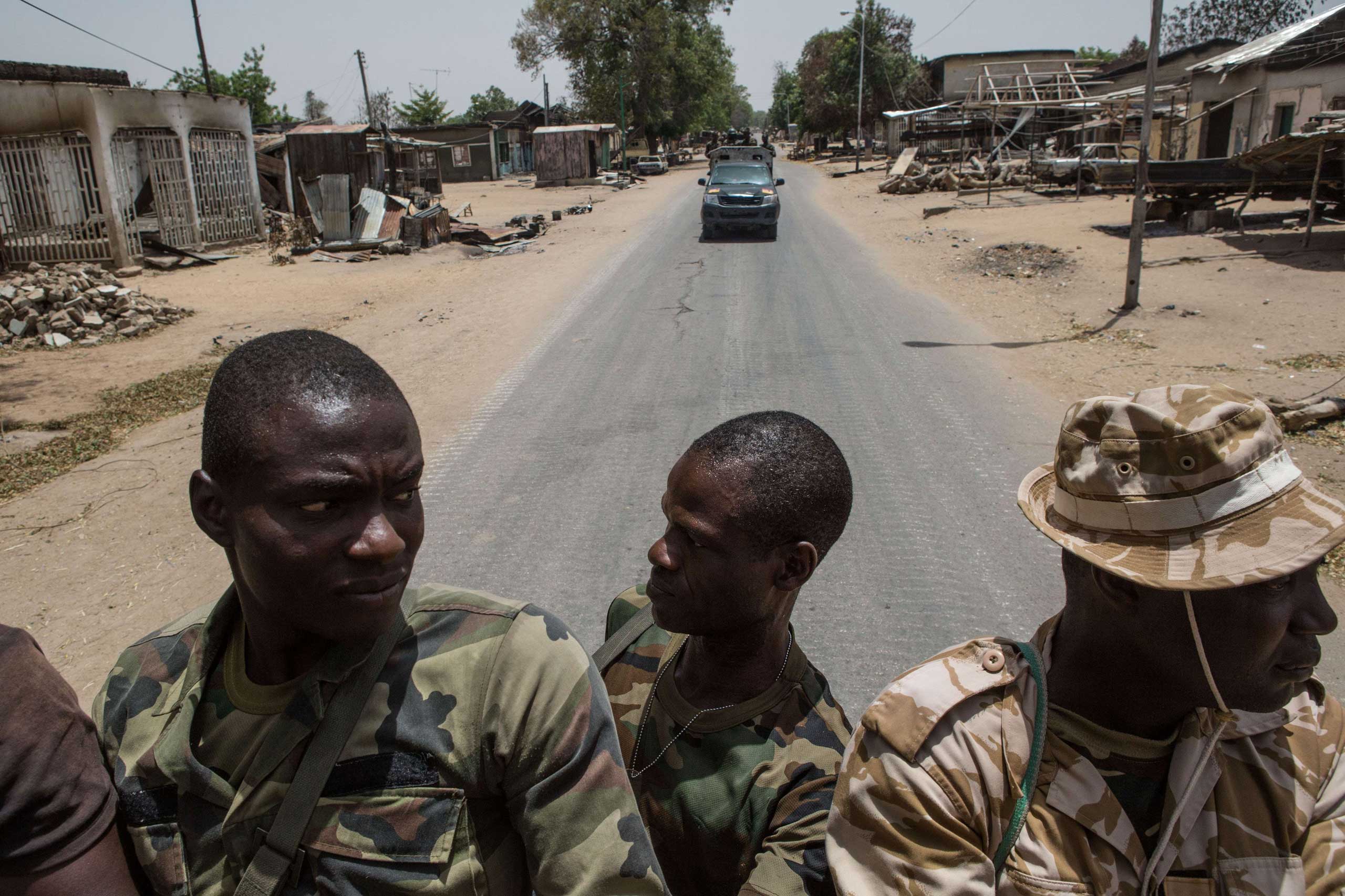 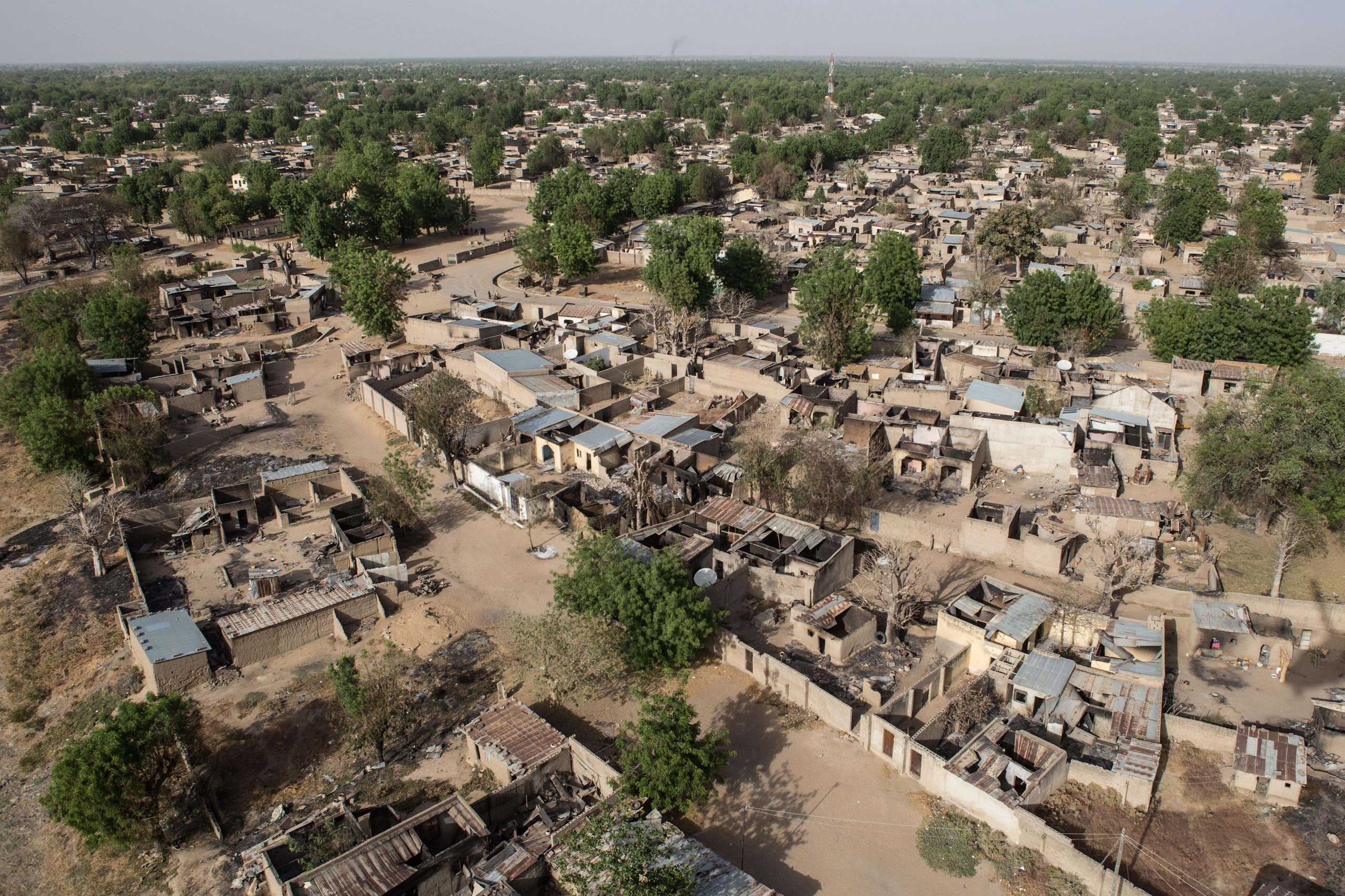 An aerial view of Bama, a northeastern town in Nigeria on March 25, 2015.
Nichole Sobecki—AFP/Getty Images 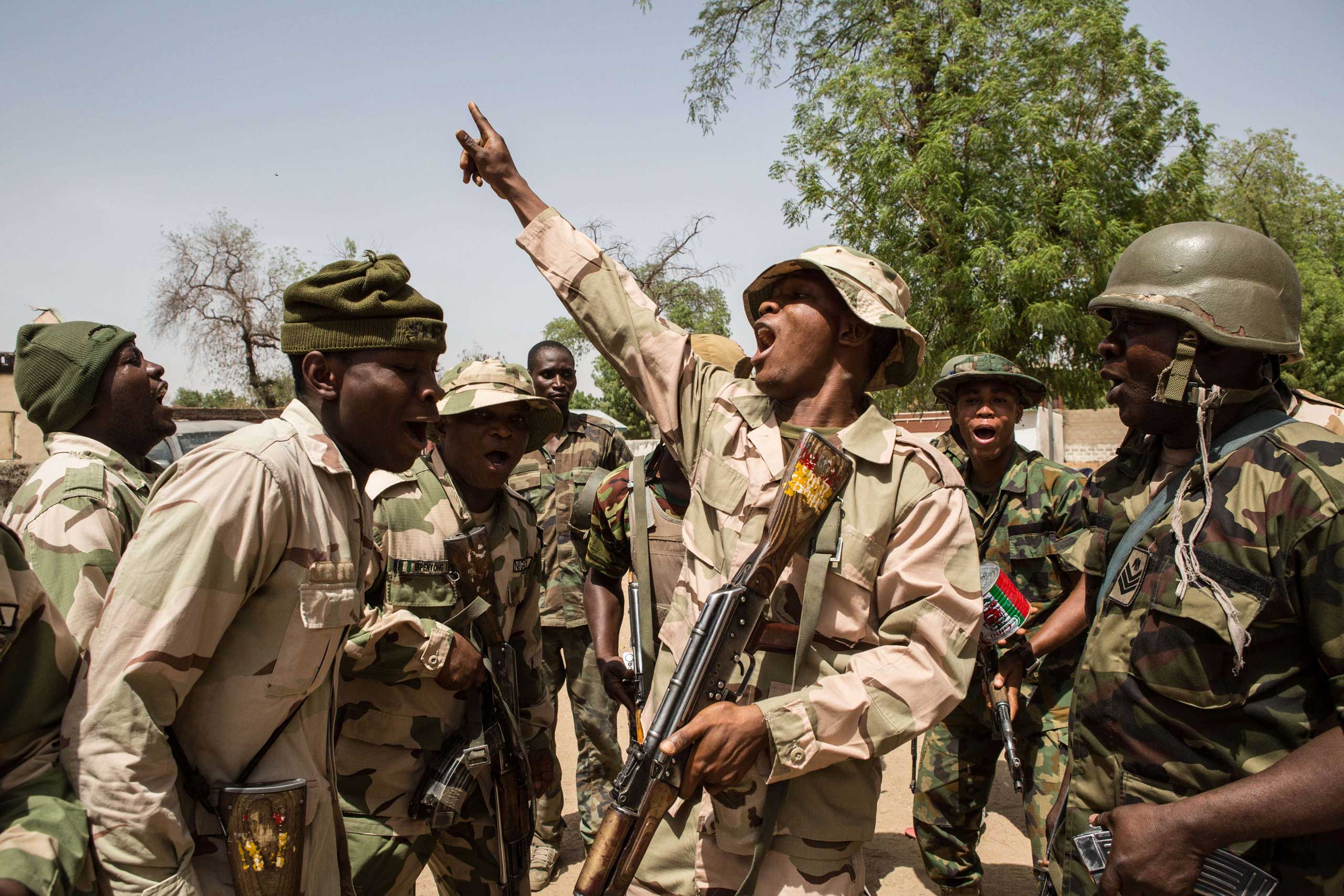 Nigerian troops celebrate after taking over Bama from Boko Haram about a week earlier on March 25, 2015.
Nichole Sobecki—AFP/Getty Images 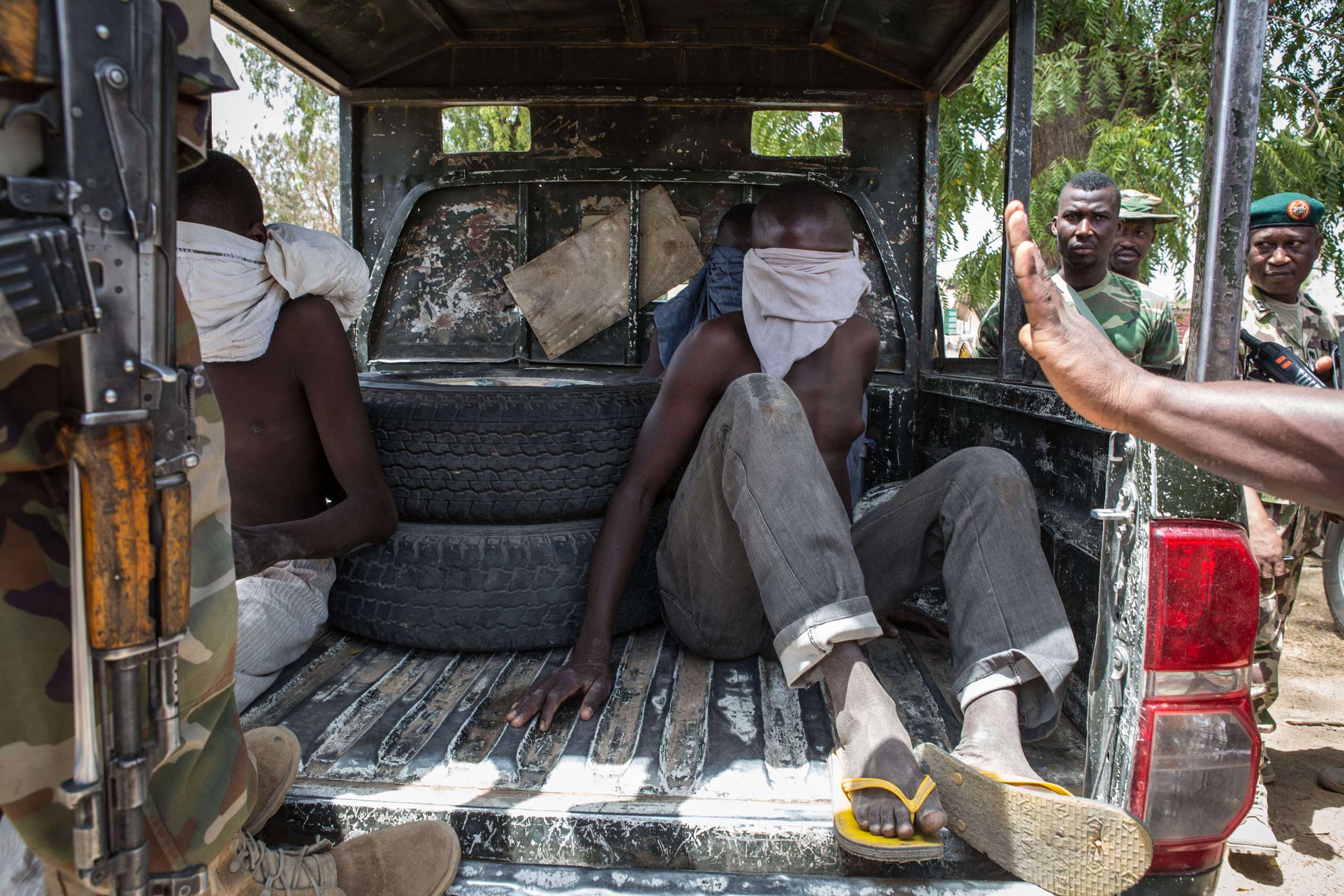 Three young men, who were discovered while entering Bama, sit blindfolded in the back of a pick-up truck before being taken for interrogation by the Nigerian army in Bama on March 25, 2015.
Nichole Sobecki—AFP/Getty Images 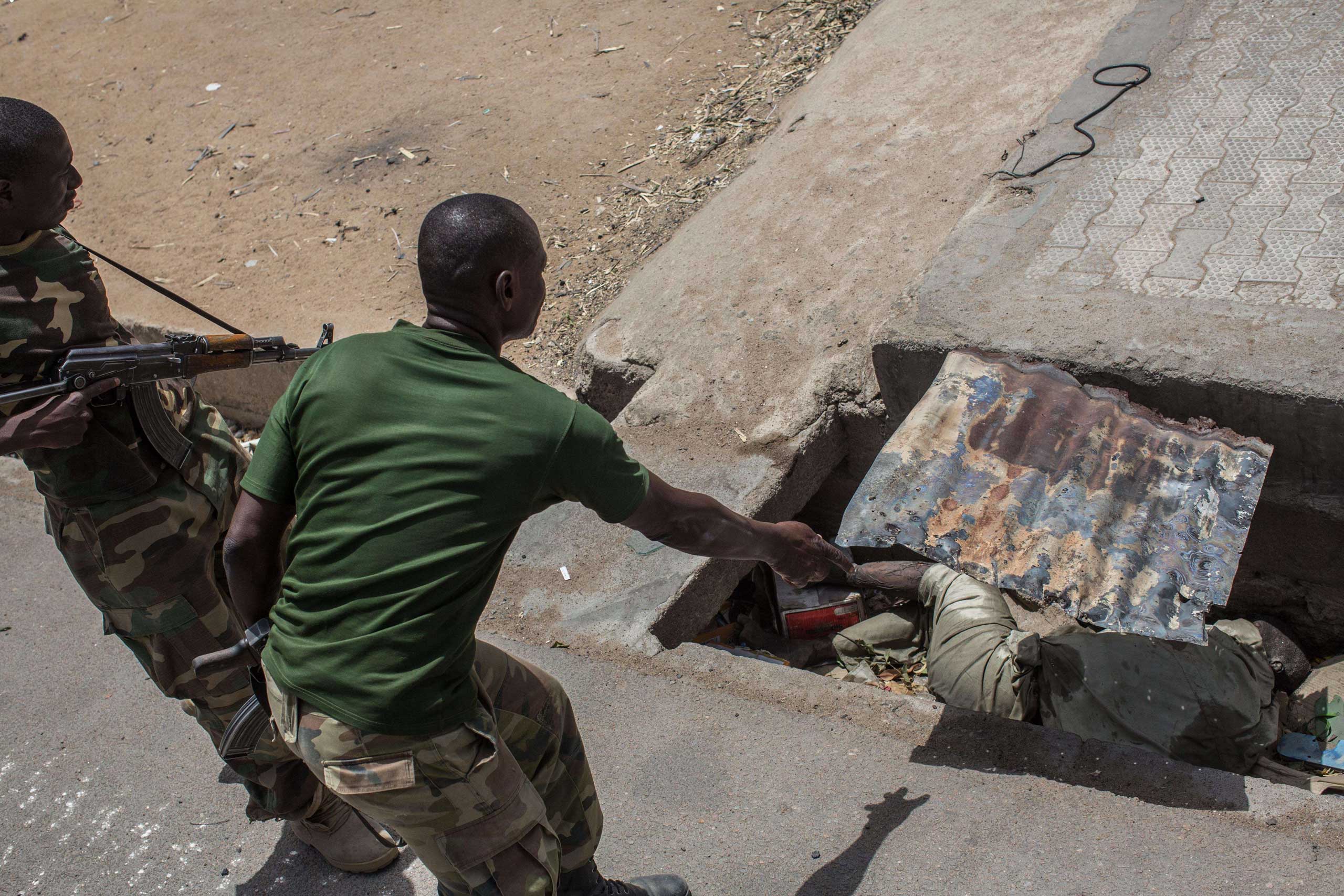 Members of the Nigerian army discover a body decomposing in a sewer in Bama on March 25, 2015.
Nichole Sobecki—AFP/Getty Images 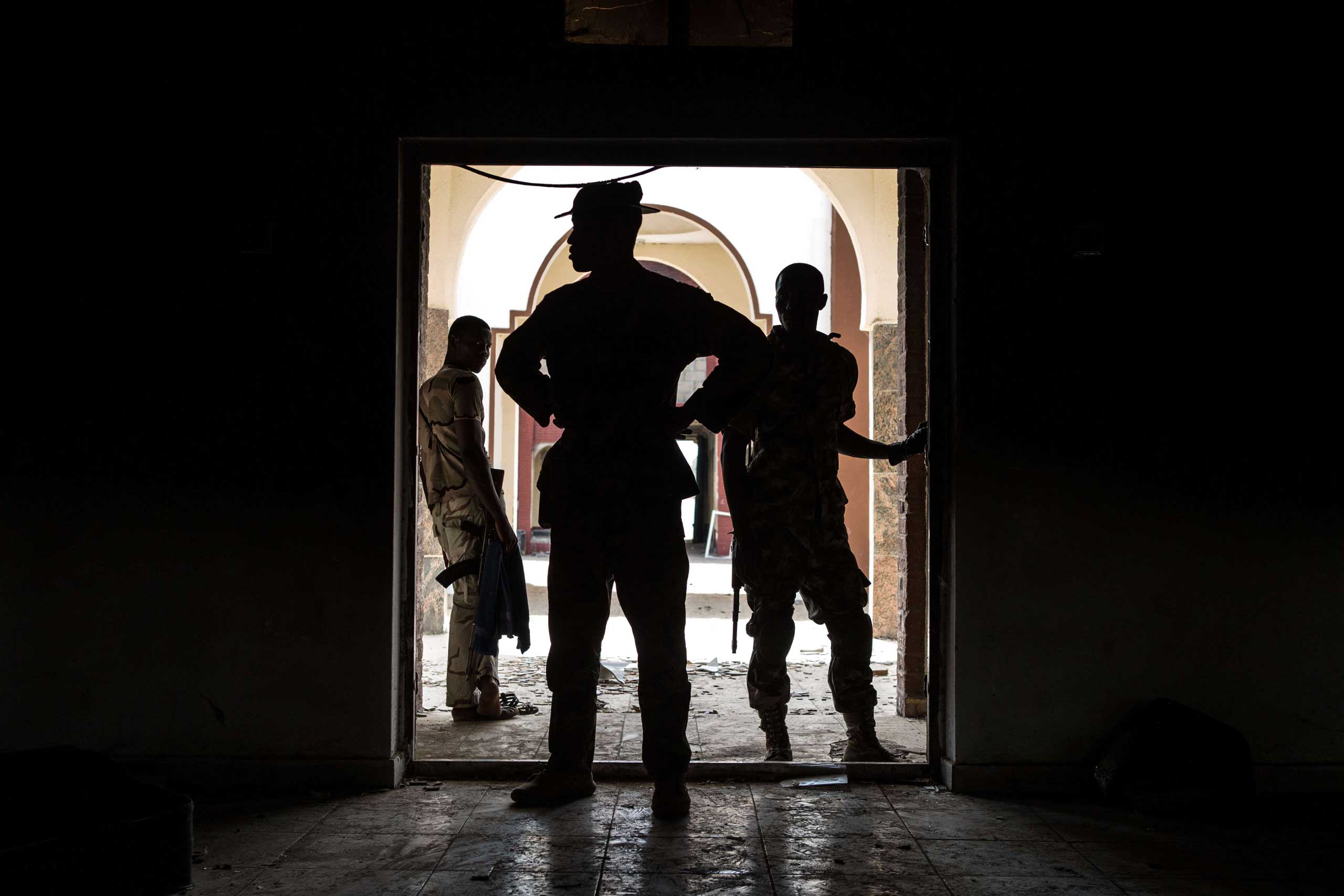 Nigerian troops inspect the former emir's palace in Bama on March 25, 2015, which was used by Boko Haram militants as a headquarters but burned down when they fled.
Nichole Sobecki—AFP/Getty Images 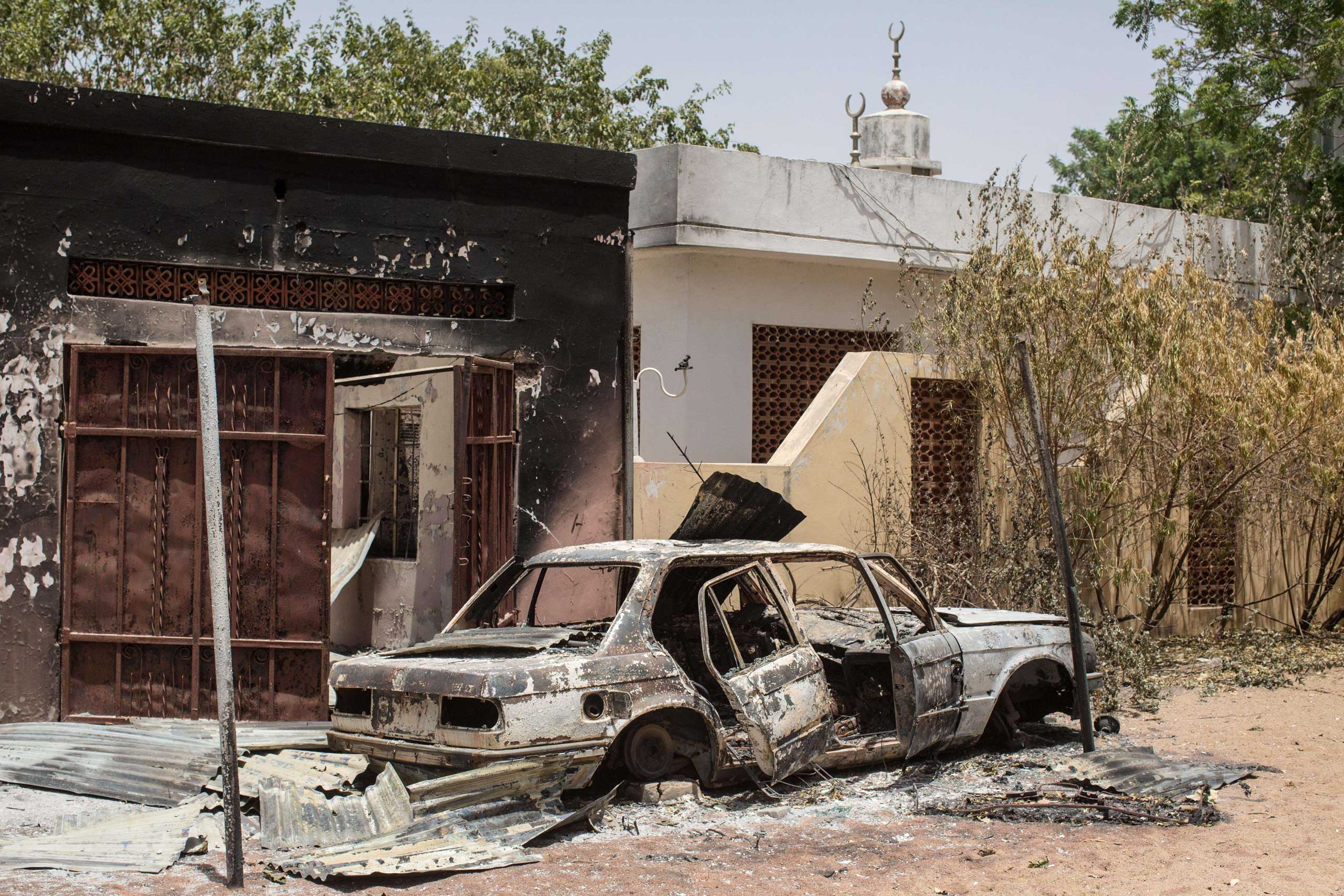 The wreckage of a burnt car sits outside the former emir's palace that was used by Boko Haram militants as a headquarters but was burned down when they fled Bama, March 25, 2015.
Nichole Sobecki—AFP/Getty Images 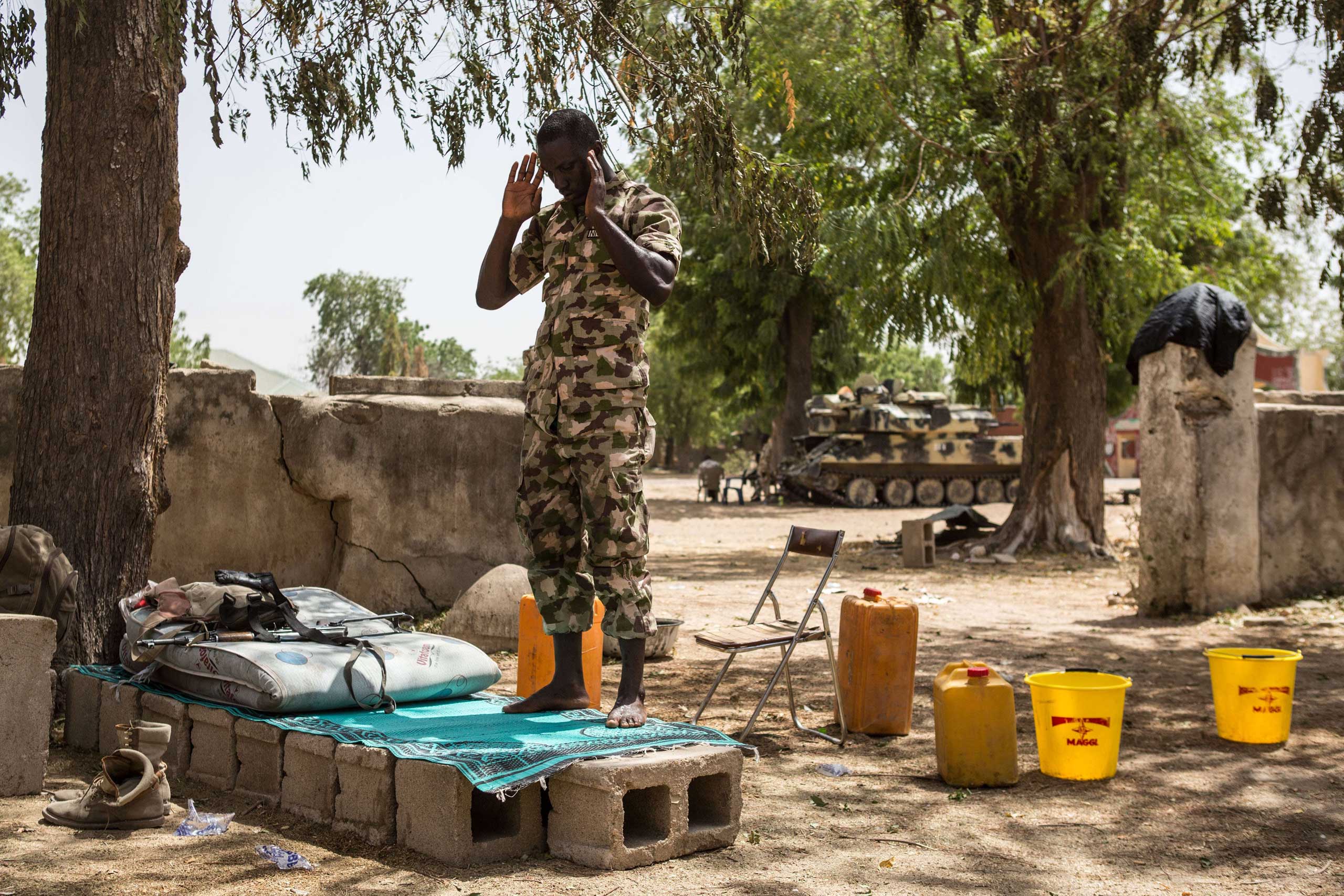 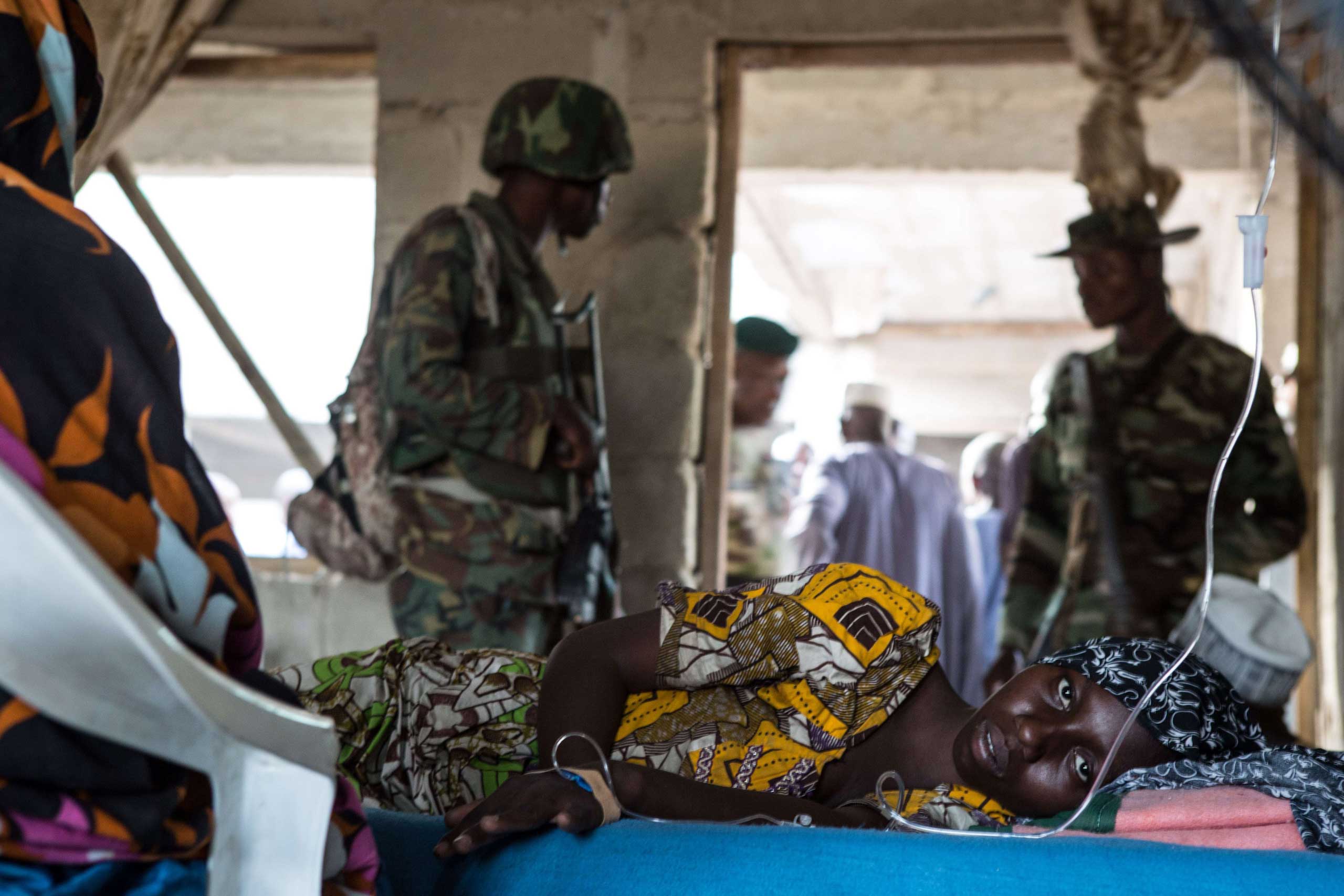 A young woman lies ill in a makeshift hospital room in Maiduguri, northwest of Bama on March 25, 2015.
Nichole Sobecki—AFP/Getty Images 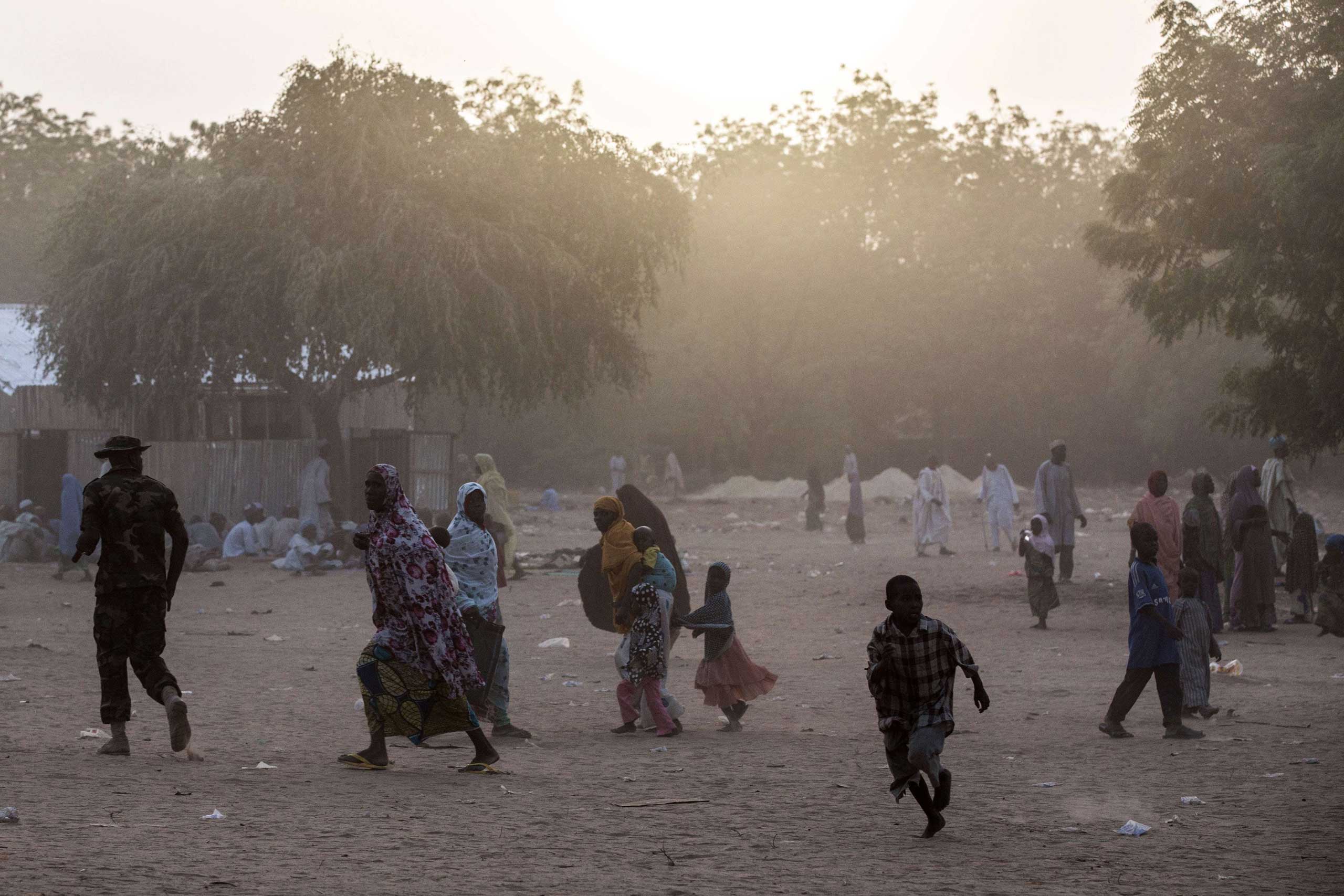 Civilians who fled the fighting in Bama and the surrounding areas in recent days walk at a makeshift camp for displaced people on the outskirts of Maiduguri, northwest of Bama on March 25, 2015.
Nichole Sobecki—AFP/Getty Images
1 of 10
Advertisement

A second key challenge is security. The depraved and vile extremism of Boko Haram continues to pose a serious danger in northeastern Nigeria and the region, with thousands killed by its attacks and scores of young girls remaining kidnapped and enslaved. Recent efforts to push Boko Haram back, including through a new regional force, have made some progress, but far more needs to be done. Meanwhile, sectarian violence—spurred by religious and ethnic tensions —is a concern across the country. In the Niger Delta, violent organized crime and the threat of renewed militancy are ever present. President Buhari will need to push through critical security-sector reforms and focus on increasing military professionalism and Nigerians’ access to justice in the courts, but the administration will also need to address the deeper socioeconomic roots of these threats.

To do so, President Buhari must tackle a third challenge by taking measures to get Nigeria’s slowing economy back on track. Given the falling price of oil, Nigeria’s economy needs to become more sustainable and diversified through investments in infrastructure. The country has vast unmet energy needs, and lack of power is one of the most serious impediments to growing Nigeria’s economy. Nigeria’s agricultural sector also must be modernized and transformed, so that the country can reduce its reliance on imported food, feed its exploding population, and give its farmers a stake in the future. For stability and enduring prosperity, it will also be important to close the development gap between the country’s northern and southern regions, and between its urban and rural areas.

Given the chaos and uncertainty of today’s world, it is important that we take note of Nigeria’s progress and celebrate it, as Secretary of State John Kerry will do when he leads the U.S. delegation to the inauguration. But it is equally vital that all of us—whether in government, the private sector, or civil society—do everything possible to ensure that these democratic gains are channeled toward the kind of institutional change that lasts far beyond Election Day. Through robust engagement with Nigeria’s new government, including direct talks between Presidents Barack Obama and Buhari, the international community can help it meet these challenges. Investing in Nigeria’s future can make a huge difference for the country, and set an example for the world. It is an opportunity we cannot miss.

Former Secretary of State Madeleine Albright is Chair of the Albright Stonebridge Group, a strategic advisory firm, and Chair of the National Democratic Institute. Johnnie Carson, a former assistant secretary of state for African affairs, serves on the board of the NDI and co-chaired its recent election observer mission in Nigeria. He also serves as a Senior Advisor at Albright Stonebridge Group.