The U.K. Children's Word of the Year Isn't Really a Word

The children’s word of the year in the UK isn’t exactly a word. It’s hashtag, or the symbol #.

After analyzing over 120,000 short story submissions by children to a BBC Radio contest, Oxford University Press found that there was a huge uptick among children using hashtags outside of Twitter, the Guardian reports.

Words such as Snapchat, selfie and emoji all appeared in the top of the list, but Vineeta Gupta, head of children’s dictionaries at Oxford University Press, explained to the Guardian why hashtag was No. 1. “Hashtag, or #, is word of the year because it is entering children’s vocabulary in a new way,” he said. “Children are not tweeting and using Twitter, but they are using the word hashtag and the symbol # for dramatic effect, it is heightening tension.”

A statement about the findings gave two examples of children using hashtags in their writing: “She then picked it up and ran out of the cave… the cave exploded and she didn’t look back at it exploding, she just kept on walking forward # super cool.” And, “The only thing I knew for sure was that I was going to get eaten (# frightened!!!).”

Among other trends, the study found that children used a lot of words related to technology, current affairs and popular culture. But it also found that gender stereotypes persisted in word use. According to the statement, “Girls write enthusiastically of cupcakes, unicorns, marshmallows, and flowers, and they love words associated with beauty and fashion… For boys, it is all very much about burgers, space, cars, and farting!” 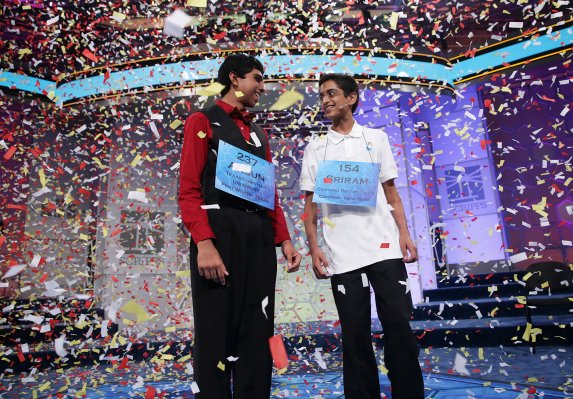 7 Things You Should Know About the 2015 Scripps National Spelling Bee
Next Up: Editor's Pick