A portion of Aurora shooter James Holmes' notebook, after it was presented as evidence in the Holmes murder trial on May 26, 2015, in Centennial, Colo.
AP
By Charlotte Alter

A notebook containing James Holmes’s ramblings, sketches and thoughts on topics ranging from the meaning of life to murder was presented on Tuesday at his trial for the 2012 mass shooting in an Aurora, Colo., movie theater that killed 12 people and injured 70 others.

It’s a key piece of evidence for prosecutors trying to prove the 27-year-old plotted the killings and for defense lawyers who argue he was experiencing a psychotic episode on July 20, when he opened fire on moviegoers at a premiere of The Dark Knight Rises.

Holmes’s notebook reveals references to violence and death and is stepped in nihilism. He writes about a “self diagnosis of broken mind” and several pages are covered with the question “Why?” over and over again. “When mankind can’t find truth,” he mentions at one point, “untruth is converted to truth via violence.”

The former doctoral student in neuroscience is pleading not guilty by reason of insanity. Prosecutors are seeking the death penalty. Holmes sent the notebook to his University of Colorado psychiatrist, Dr. Lynne Fenton, eight days before the shooting, but the package was not discovered until several days after the massacre. Fenton had warned authorities that Holmes was a danger to the public.

Holmes describes in the journal a number of fantasies about different ways to kill, but quickly rules them out. He says a bomb is too regulated and suspicious, biological warfare requires extensive knowledge of chemicals and serial murder is “too personal, too much evidence, easily caught after few kills” before settling on a “mass murder spree.” He writes that he chose this method because it would provide “maximum casualties, easily performed with firearms, although primitive in nature. No fear of consequences, being caught 99% certain.”

At one point, he rules out certain venues, like airports, because he didn’t want his mass killing to be misinterpreted as a terrorist act. Airports have “too much of a terrorist history,” he writes. “Terrorism isn’t the message. The message is there is no message.” The journal also includes diagrams of different theaters within the movie complex, as well as pros and cons for each one.

“And finally, the last escape, mass murder at the movies,” he writes. “Obsession onset: > 10 years ago.”

Holmes describes his psychological struggles as “the real me is fighting the biological me,” and notes that work and romantic failures aren’t the reason for his action, although both are “expediting catalysts.” Instead, he claims, his “state of mind for the last 15 years” is to blame for his actions.

He notes a particular set of symptoms and behaviors that accompanied his self-diagnoses of a “broken mind,” including a “recurring return to mirror to look at appearance, particular attention focused on hair styling. 10+ times a day.” At the time of the shooting, Holmes’s hair was dyed a bright red-orange. He also describes at least one childhood accident that injured his genitals, which he alleges led to an “allergic reaction to sex.”

In one particularly chilling passage, Holmes alludes to the name of the movie he selected for the attack: “I was fear incarnate. Love gone, motivation directed to hate and obsessions, which didnt disapear for whatever reason with the drugs,” he writes. “No consequences, no fear, alone, isolated, no work for distractions, no reason to seek self -actualization. Embraced the hatred, a dark knight rises.” 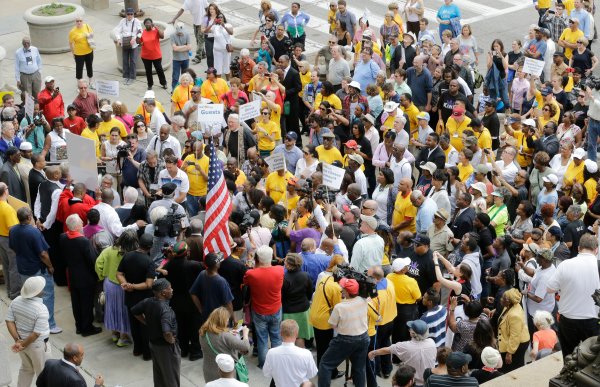 Cleveland Police Restrictions by DOJ Among the Most Extensive, Expert Says
Next Up: Editor's Pick