Dean Potter, Extreme Risk and the Allure of the ‘Dangerous Arts’

Dean Potter was six-foot-five, with large hands, broad, muscular shoulders and a thick mane of wavy brown hair. Like his appearance, his reputation was also outsized. When he died on May 16, along with his climbing partner Graham Hunt, while flying their wingsuits in Yosemite National Park, the 43-year-old Potter had accomplished many outlandish and improbable feats, including free-soloing the Swiss Eiger, slack-lining above 400-foot chasms and soaring at 150 miles per hour, a bird with nylon feathers, a few feet from a massive rock wall. Potter was an icon of the “dangerous arts,” as he called them. He did not want to die, he often said, but he was always keenly aware of the possibility. As the old saw goes, dine with cannibals and eventually you will get eaten.

Potter’s death, even more than his life, prompted an outpouring of stories, tributes and reflections on the meaning of risk, some critical, some reverent and lionizing. The widespread public attention is understandable. Potter pursued a lifestyle that was thrilling and terrifying, routinely flirting with disaster to a degree few of us ever will. It was hard to watch, but harder still to look away.

In recent years, researchers have attempted to understand what motivates men and women like Potter to play such dangerous games. Brain scans of adventure athletes have revealed that extreme sports light up the same reward centers as other potentially risky behavior like drug abuse, promiscuous sex, and gambling. Some studies indicate that risk takers may have relatively high levels of dopamine, a hormone associated with stimulation and pleasure, and need increasingly intense doses of activity to feel fulfilled.

“Doing things with serious consequences, whether it’s death or seriously mangling myself, puts me in a hyper-aware state, and has become somewhat of an addiction for me,” Potter said in an interview in 2010.

He took his addiction seriously. What appears in videos and magazine photos as spontaneous acts were, in reality, the culmination of weeks, or even months of dedicated training. He rehearsed his feats close to the ground. He conditioned his body like a Navy Seal, grunting out thousands of preparatory push-ups and pull-ups. He trained his mind to manage fear through hours of quiet concentration. Before his ascent of the Eiger, Potter spent weeks living in an alcove on the side of the mountain, “waiting for the clouds to part, meditating for big portions of the day, doing yoga to stay limber… watching the swirling clouds and living like plankton on that rock.”

It’s tempting to characterize him as a purist and an ascetic, but Potter was polarizing. He was also known to be a rogue and a scofflaw. BASE jumping is illegal in national parks, yet he performed it often. An ill-advised 2006 climb on Utah’s Delicate Arch, fiercely protected by conservationists, cost him a sponsorships from Patagonia. A 2014 video of Potter wingsuiting with his dog, Whisper, strapped to his back garnered more than a million views, further raising his profile—and controversy.

Despite his often cavalier persona, Potter was haunted by his exploits, which fueled nightmares of him falling out of the sky. In one vivid, recurring dream, “he was plummeting, out of control, a dead tree spiked up, like the hands of a corpse,” he told Alpinist magazine.

Potter didn’t shrink from what scared him, he climbed toward it, and somewhere in that process he felt the most free, the most alive. This may be, in part, why he would often correct those who characterized what he did as a “sport,” insisting, rather, that it was his art, or a kind of spirituality.

Whether you accept this or not may determine your ultimate feelings about Potter and the legacy he left behind. Were his outings just another reckless spectacle, entertaining a voyeuristic culture? Or did he offer something of more lasting value? A reminder, perhaps, that in our increasingly sedentary, insulated, comfortable, and convenient world there is something important to be found in genuine adventure, hurtling into the unknown where the risks are real and the outcome uncertain. 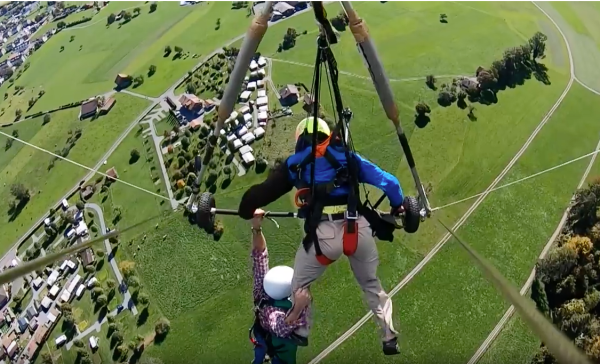 Harrowing Video Shows Hang Glider Clinging on for Dear Life After Realizing He's Not Strapped In
Next Up: Editor's Pick