Texas Grandmother Reunited With Poodle Trapped at Home During Floods

Lena Givens, 84, was at a Houston Rockets game Monday night when the skies opened, submerging multiple counties in record-breaking rains.

The resulting flood that has killed at least 18 in Texas and Oklahoma left the grandmother stranded and unable to get to her house where her poodle Tinkerbell was locked in a kennel.

Just before the end of game, a message flashed on the scoreboard warning fans to stay put due to severe weather outside, NBC News reports.

“I stayed in the lobby of the hotel for at least probably three or four hours,” she told Houston’s KRPC.

When she was able to call a car to get home, she found the road to her neighborhood was impassable. Givens worried about her beloved pet that had been trapped in her flooded house for over 12 hours.

Her grandson Brian Gardner was able to borrow a friend’s boat to reach Givens’s home and look for Tinkerbell.

After hours of worrying, Givens finally got the good news she was hoping for – her dog was safe.

“[Tinkerbell”] was floating on a chair in the living area. She got out of the kennel somehow and she was floating in a chair,” she told the news station.

Watch video of Givens and Tinkerbell reunion below. 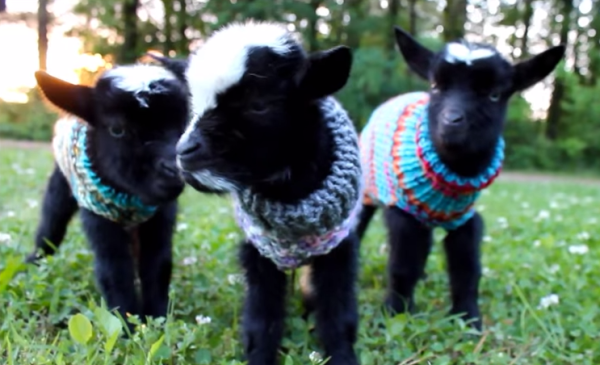 Here Are 3 Baby Goats Wearing Sweaters
Next Up: Editor's Pick