If you thought the destructive laserlike beams from Star Wars’ Death Star were just a figment of George Lucas’s imagination, think again– beams of energy powerful enough to cross galaxies are real, and the Hubble Space Station just got a video of one.

You’re watching an extragalactic jet of gas traveling at 98% the speed of light, launched from a massive black hole that could weigh a billion times the mass of the sun. The gaseous stream formed by the magnetic fields of the enormous black hole looks almost like a laser, but photos taken by the Hubble Space Telescope reveal that the jet is actually made of multiple globes of material strung together like pearls.

When Eileen Meyer of the Space Telescope Science Institute put these images together into a time lapse, she discovered that each globe was rear-ending the one in front of it, creating a shock collision that further accelerates the particles into a beam of radiation, and causes them to brighten.

“Something like this has never been seen before in an extragalactic jet,” Meyer said in a statement. “This will allow us a very rare opportunity to see how the kinetic energy of the collision is dissipated into radiation.”

But this beam of radiation is coming from a host galaxy 260 million light-years away, which means we’re seeing it as it looked before the dinosaurs existed. 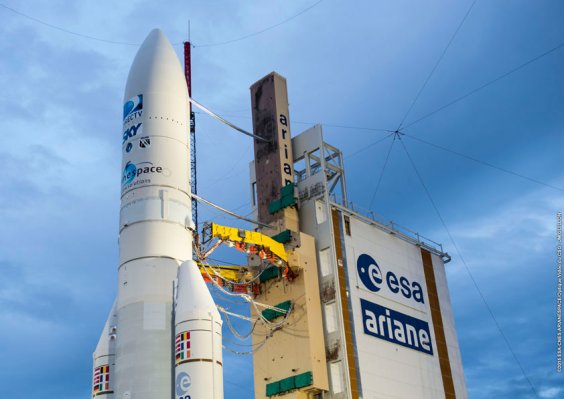 Watch Ariane 5 Launch 2 Satellites Into Space
Next Up: Editor's Pick