Forecasters expect this year’s tropical storm season to be weaker than usual with zero to two major hurricanes predicted to affect the United States, the National Oceanic and Atmospheric Administration (NOAA) announced Wednesday.

The announcement came days before the official start of the Atlantic hurricane season on June 1. Hurricane season typically lasts until the end of November.

Overall, the agency predicted 6 to 11 named storms with winds of 39 mph or greater and 3 to 6 hurricanes with wind speeds of 74 mph or greater. Despite the “below average” prediction, officials from NOAA and the Federal Emergency Management Agency (FEMA) stressed that communities typically affected by hurricanes, particularly along the Gulf Coast, should still prepare for the worst.

“No matter how many pitches Mother Nature throws at us, from only a few to a whole lot, if just one of those pitches gets through the strike zone we can be in for a lot of trouble,” said NOAA Administrator Kathryn Sullivan at a press conference. “Below average doesn’t mean no pitches get thrown our way.”

The El Niño weather phenomenon, which began this spring, is at least in part responsible for the suppression of storm activity, Sullivan said.El Niño tends to increase wind shear, the difference in wind speed and direction over a relatively short distance, which in turn subsequently slows down storm formation and growth.

In the NOAA press conference, New Orleans Mayor Mitch Landrieu said that his city is better prepared to handle a major hurricane today than it was when the Hurricane Katrina hit 10 years ago as a Category 3 hurricane, killing more than 1,800 people—but he stressed that city residents should still prepare.It’s also important to remember that a storm doesn’t necessarily have to be powerful in order to wreck a lot of havoc. Superstorm Sandy wasn’t technically strong enough to be rated as a hurricane when it made landfall in New Jersey on Oct. 29, 2012—yet it caused north of $60 billion in damage because of its sheer size and because it squarely hit some richest, most populated coastal territory in the U.S. There’s no way to predict today where any hurricanes that may form in 2015 could make landfall—and location matters as much as strength.

“We always hope for the best and prepare for the worst,” he said. “We have a lot of work to do, but we’ve learned a lot of the path.” 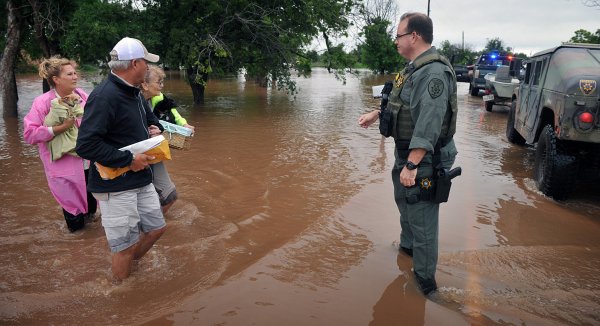 Rain Threatens to Wash Out Memorial Day Weekend
Next Up: Editor's Pick