In a cascading explosion of events that sent the soccer world into shock on Wednesday, U.S. Attorney General Loretta Lynch said that officials of the International Federation of Association Football (FIFA) — the world’s most powerful and lucrative sporting body — had engaged in decades of criminal actions in which they pocketed millions of dollars in bribes over more than two decades. Unveiling charges of money laundering, racketeering and wire fraud against 14 people, including nine FIFA officials, Lynch said the charges showed “corruption that is rampant, systemic and deep-rooted both abroad and here in the United States,” and that “at least two generations of soccer officials … have abused their positions of trust to acquire millions of bribes and kickbacks.”

“They did this over and over, year after year, tournament after tournament,” Lynch said at a press conference on Wednesday.

In a morning that left FIFA officials reeling, Swiss police stormed the Zurich hotel rooms of seven executive committee members before dawn on Wednesday, hauling them into custody in preparation for extradition to New York City, whose Eastern District Court unveiled indictments against 14 people, including two FIFA vice presidents, involving bribe taking and fraud worth millions and dating back to 1991.

That was not the end of the morning’s stunning events. Within hours, Switzerland’s Attorney General’s Office announced it had raided FIFA headquarters in Zurich on Wednesday and seized hordes of documents and computer hard drives, in connection with “criminal mismanagement and money laundering.” The Swiss charges relate to FIFA’s decision in December 2010 to award the World Cup to Russia in 2018 and Qatar in 2022. The prospect of Qatar hosting the Cup was greeted with incredulity as it has never qualified for the tournament, it has a population of just over 2 million and its summers are too hot for outdoor sports although it one of the richest countries in the world. Qatar beat the U.S. by a single vote.

FIFA’s management tried to downplay the severity of the charges on Wednesday and attempted to portray the organization as having been the victim of errant figures within its executive ranks — casting the indictments as the result of a few rotten eggs within an otherwise clean organization. “We are very happy about what is happening right now,” FIFA spokesman Walter de Gregorio told a packed press conference at the organization’s headquarters in Zurich, where football officials from across the world are gathered this week for FIFA’s congress, and to vote on Friday for a new (or re-elected) president. “It is once again FIFA suffering under these circumstances. It is certainly a difficult moment for us.”

De Gregorio did not appear to have read the Department of Justice press release published Wednesday in which acting U.S. Attorney Kelly Currie of the Eastern District of New York said that Wednesday’s announcement was a message that enough was enough. “After decades of what the indictment alleges to be brazen corruption, organized international soccer needs a new start — a new chance for its governing institutions to provide honest oversight and support of a sport that is beloved across the world, increasingly so here in the United States. Let me be clear: this indictment is not the final chapter in our investigation.”

FIFA’s hastily arranged press conference appeared designed to quarantine the organization and its president Sepp Blatter from the turmoil raging around them, and to allow this week’s meeting to go ahead as planned — as well as to try to prevent FIFA members from reopening the votes on the 2018 and 2022 World Cups. “Russia and Qatar will be played. This is what is fact today. I don’t go into speculation about what will happen tomorrow,” de Gregorio told reporters.

How FIFA can control the damage from Wednesday’s charges and arrests, and keep the organization on track, is still unclear. But de Gregorio reminded journalists several times that it was FIFA itself that had opened the corruption investigation in Switzerland last November, which led to Wednesday’s raid. He said not even Blatter had known about the impending arrests, despite the fact that he has run the organization with despotic control for 17 years, and is up for re-election for a fifth term in office.

Among those arrested in Zurich was one of Blatter’s closest allies, FIFA vice president Jeffrey Webb, who heads the regional football association for North and Central America and the Caribbean (CONCACAF), and who many have regarded as Blatter’s likely successor. Despite that, de Gregorio insisted Blatter was untouched by Wednesday’s events. “The president is not involved,” he told reporters, and they bombarded him with questions about the FIFA president’s viability. “Of course he is the head of FIFA. But he is not involved, so how can you say he has to step down? He is the president, he is the president, and in two days he will stand for re-election.”

The raids in Switzerland were preceded by the unsealing of a 47-count indictment early Wednesday morning in federal court in Brooklyn, New York City. It also emerged that four individual defendants and two corporate defendants had already pleaded guilty.

Two of the most senior officials were Webb and Jack Warner, the former president of CONCACAF, whose headquarters in Miami were also raided Wednesday.

The Department of Justice also revealed that two sons of Warner, Daryl and Daryan Warner, pleaded guilty to wire fraud and other charges in July 2013. The other men who pleaded guilty were Charles Blazer, the former CONCACAF general secretary and a former FIFA executive-committee member, and José Hawilla, the owner and founder of Traffic Group, the Brazilian sports-marketing conglomerate. Hawilla also agreed to forfeit over $151 million, $25 million of which has been paid. 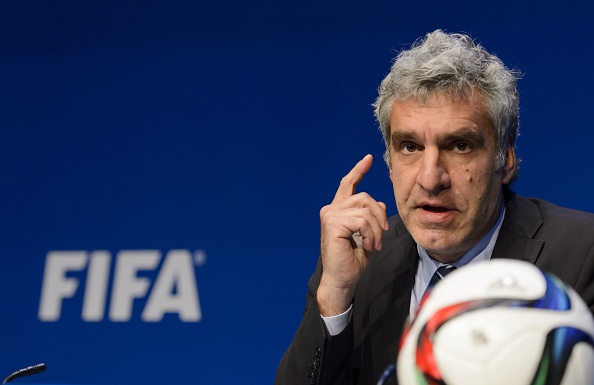