As the battle wages on in Congress over President Barack Obama’s signature trade agreements and the needed fast-track trade promotion authority (TPA), the president would be wise to consider alternatives that would enhance his trade legacy and also further our strategic priorities overseas. While energy is not included in the Trans-Pacific Partnership (TPP) or Transatlantic Trade and Investment Partnership (T-TIP) negotiations, many of the same Asian, European, and Latin American partners are calling for greater partnership with the United States on energy issues. By allowing the U.S. to become a stable source of supply to global energy markets, counteracting supply disruptions that will inevitably affect other energy-rich regions, President Obama and Congress can double down on promoting long-term economic growth and reinforcing U.S. foreign policy leadership.

The U.S. can do more with its energy resources to support this strategic vision. A direct way of leveraging this opportunity is to lift the ban on the export of crude oil and accelerate approvals for the export of liquefied natural gas (LNG). A series of policies and laws in the 1970s banned exports of U.S. crude oil with only limited exceptions. This ban is a relic from an age of energy scarcity and should be adjusted to reflect present realities. By working with Congress, and via executive order, the president can start taking steps today to boost U.S. exports.

There would be four strategic benefits to doing so.

First, energy exports would strengthen NATO and our broader transatlantic relationship at a time of increased Russian aggression. The European Union has responded to Russia’s energy stranglehold by proposing policies designed to avoid future crises of supply and promote self-sufficiency. The E.U. antitrust case against Russian energy company Gazprom is important. But more can and should be done to build a strategic U.S.-European relationship on energy security. Working with our allies and partners, a joint effort to reduce Europe’s vulnerability to Russian energy coercion would be an important legacy for President Obama and send a signal to President Vladimir Putin that as long as he chooses to use energy as a weapon, the West will defend itself. While it will take years to build the necessary infrastructure to receive more LNG, enhance transport pipelines, and otherwise increase Europe’s energy resilience, there is no better time to start than now.

Second, increased energy trade with our Asian partners would add substance to the U.S. rebalance to Asia, serving to bolster the region’s energy security and promote the continued economic vitality of allies such as Japan and South Korea, while also offering new areas for possible collaboration with China, India, and ASEAN members.

Third, energy exports could open up a new era of collaboration in our own hemisphere. As Venezuela scales back its energy exports in response to domestic challenges, this presents a strategic opportunity for the U.S. to fill the energy void with the 17 Central American and Caribbean nations that have depended on Venezuelan energy subsidies. Moreover, increased energy integration among NAFTA members would create a North American energy powerhouse that will reinforce the above objectives.

Finally, the core of our strength overseas is economic strength at home. The “shale revolution” has created thousands of jobs, revitalized and expanded the domestic energy industry, spurred breakthrough technology with a global impact, and significantly improved the U.S. trade balance. The U.S. has tripled its exports of refined oil products over the last decade as a consequence of the recent energy boom. American primary energy firms, however, have been unable to capture higher gas and oil prices on the global market. A prudent way to support the continued expansion of the U.S. energy sector and our domestic energy security is to level the playing field by relaxing restrictions on American crude oil and LNG exports. Legislation such as the bipartisan LNG Permitting Certainty and Transparency Act introduced by Senators John Barrasso, a Republican from Wyoming, and Martin Heinrich, a Democrat from New Mexico, and supported by the Energy Department provide a good foundation to build on.

For the first time in a half century, President Obama has the opportunity to re-write the energy balance of power in our favor and solidify his legacy on trade. President Obama is the only U.S. president in decades who has had the tool of energy abundance at his disposal; he should use it. 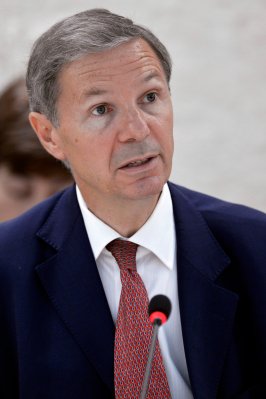 Former Head of UN Peacekeeping: How to Navigate the Fog of Peace in the Middle East
Next Up: Editor's Pick