Obama Calls on Senate to Act on Patriot Act During Recess

President Barack Obama speaks to members of the media during his meeting with NATO Secretary General Jens Stoltenberg, Tuesday, May 26, 2015, in the Oval Office of the White House in Washington.
Pablo Martinez Monsivais—AP
By Maya Rhodan

President Obama called on the Senate Tuesday to work through their early summer vacation in order to keep the Patriot Act from expiring in a week.

“I strongly urge the Senate to work through this recess and make sure that they identify a way to get this done,” Obama said, following a meeting with the NATO Secretary General in the Oval Office.

The Senate left town ahead of Memorial Day without passing a bill to either reauthorize or reform the Patriot Act, including portions that have given the National Security Agency leeway to collect massive amounts of data on American’s telephone calls. The House of Representatives came to an agreement and reformed the controversial program, which was revealed in leaks by former U.S. intelligence contractor Edward Snowden. The Senate, however, failed to pass the USA Freedom Act before leaving Washington.

The President said Tuesday that the USA Freedom Act “strikes an appropriate balance” between the intelligence community and American’s privacy, but said failing to affirm remaining Patriot Act authorities puts the nation’s security at risk.

“You have a whole range of authorities that are also embodied in the Patriot Act that are non-controversial, that everybody agrees are necessary to keep us safe and secure,” Obama said. “Those also are at risk of lapsing. So this needs to get done.”

Leaders of both the House and the Senate have been in conversations about a compromise bill that would allow the retention of phone records to continue, with the information remaining stored at the phone companies for a set number of years, where it could be searched by government officials with a court order. Currently, the information is retained by the government, a fact that led Kentucky Sen. Rand Paul, a Republican presidential candidate, to seize the floor of the Senate late last week for 11 hours, helping to prevent a resolution of the issue before the recess.

The Patriot Act expires on June 1. 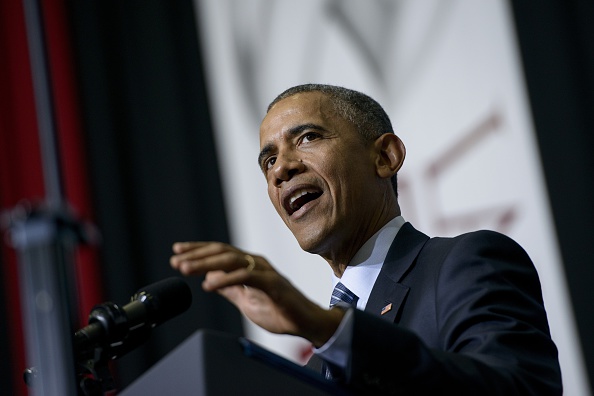