Mary Ellen Mark photographed in the Fall of 1967.
Ralph Gibson
By Olivier Laurent

Mary Ellen Mark, the celebrated photographer best known for her in-depth documentary projects and her portraiture, has died. She was 75.

A humanist photographer, Mark’s work had been widely published in LIFE, the New York Times Magazine, The New Yorker, Rolling Stone, and Vanity Fair. During her career, the photographer, who was born in Elkins Park, Penn., near Philadelphia, produced 18 books and was working on her 19th for Aperture. That final project was focused on Tiny, a young prostitute from Seattle whom she had photographed in Streetwise, her much admired opus published in 1988.

Working for LIFE Magazine, Mark had traveled to Seattle in 1983 to work on a story about runaway children. Along with reporter Cheryl McCall, she had chosen Seattle “because it is known as ‘America’s most livable city’,” she wrote in the preface to her book. “By choosing America’s ideal city we were making the point: ‘If street kids exist in a city like Seattle then they can be found everywhere in America, and we are therefore facing a major social problem of runaways in this country.”

Streetwise emerged from the assignment. “In every successful still photographic project that I have completed there has always been a turning point in the story where I felt that perhaps I was working on something that could be very special,” Mark wrote. Streetwise also became a documentary film, directed by the photographer’s husband Martin Bell.

Streetwise, in essence, was the continuation of a body of work commenced with Ward 81, another of Mark’s influential books. In 1976, Mark had spent six weeks in a women’s security ward of the Oregon State Mental Institution, then the only locked ward for women in the state. “I wanted to do an essay on the personalities of people who are locked away to show a little bit of what they’re like, especially the women,” Mark told TIME in 1978. “I didn’t want to show them as exotically crazy.”

TIME’s Robert Hughes, writing on the project, embraced Mark’s photographs. “What resulted was, in fact, a lamentation: one of the most delicately shaded studies of vulnerability ever set on film,” he wrote.

Mark joined Magnum Photos in 1977, becoming one of the agency’s few female photographers. But her time at collective would be brief: she left in 1981 to create her own studio.

“Mary Ellen lived hungrily, fully, and had this extraordinary will and determination,” says Melissa Harris, the editor-in-chief at Aperture Foundation, which published Streetwise in 1988 and will release Streetwise, Revisited this fall. “She wanted to work – she loved being a photographer. She was great with her subjects – working so intuitively – and was able to get at the essence of the people she was photographing, to tell their stories. It mattered to her to represent them faithfully and truly, and not just in the documentary visual sense, but distinguishing each individual for who he or she really was in the world. Her work is humane, all heart.”

She adds: “On another, equally important note, she was the most loyal and generous of friends.”

A devotee of film photography, Mark never truly converted to digital. “I’m staying with film, and with silver prints, and no Photoshop,” she told The Philadelphia Inquirer in 2008. “That’s the way I learned photography: You make your picture in the camera. Now, so much is made in the computer… I’m not anti-digital, I just think, for me, film works better.”

She is survived by her husband.

TIME LightBox will publish a tribute to Mary Ellen Mark’s extensive body of work on May 27. 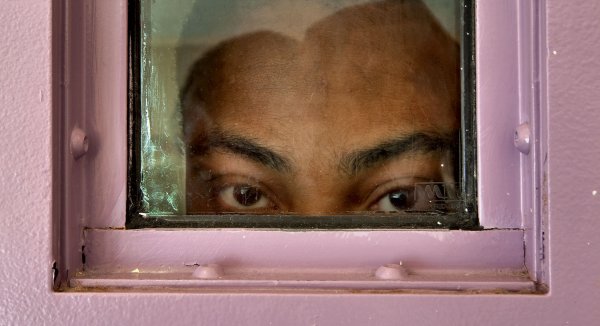 Inside the Juvenile-Detention System
Next Up: Editor's Pick