During a speech Thursday at the Boy Scouts’ annual national meeting in Atlanta, Gates said the ban is no longer sustainable and called for a change. Gates, who is the former U.S. Secretary of Defense, said the ban could lead to tough legal battles, the Associated Press reports

“The status quo in our movement’s membership standards cannot be sustained,” he said, though according to NBC News he did not announce a formal change on Thursday.

Though the Boy Scouts of America now accepts gay scouts, a ban on openly gay troop leaders remains in place. Some councils, including one in New York, have defied that ban by allowing openly gay leaders to serve, but the national ban is still in effect. Gates said Thursday that could change soon.

Gates’ statement is being well-received by those in the scouting community who have been pushing for a removal of the ban. Scouts for Equality executive director Zach Wahls said in a statement he was “proud” that Gates is “chartering a course towards full equality in BSA.”

“Dr. Gates has built his reputation on straight talk, and I’m glad he’s fully endorsing a re-evaluation of the Boy Scouts’ ban on gay adults,” said Wahls. “It seems like the Boy Scouts will continue an internal dialogue about the subject and that a full vote within the next year or two is imminent.”

GLAAD president and CEO Sarah Kate Ellis called it a good first step. “We are pleased that Roberts Gates has acknowledged what has always been true – this discriminatory ban needs to be dropped,” Ellis said in a statement. “There is much more left to be done until full equality prevails in Scouting, but recognizing how out of step the ban is with basic fairness is a good first step.” 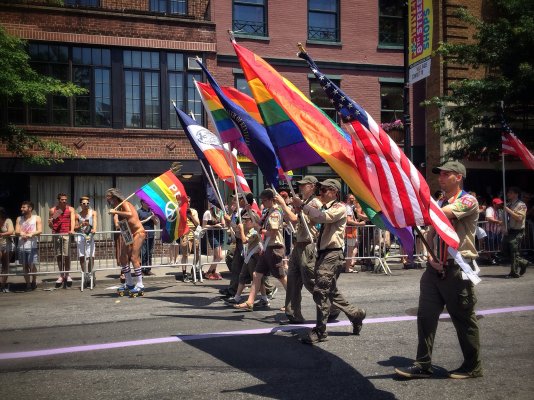 An Open Letter to Robert Gates: The Boy Scouts Need to Accept Gay Adults
Next Up: Editor's Pick