In a bid for the support of the evangelical wing of the Republican Party, Sen. Ted Cruz spoke to a private gathering of 600 conservative pastors and their wives Thursday morning in Washington.

The Texas Republican was the only 2016 presidential hopeful to speak at the annual “Watchmen on the Wall” conference, held at the Hyatt Regency on Capitol Hill. His remarks focused almost exclusively on the idea that religious liberty is under attack.

“The modern Democratic Party has become so radical, so extreme, that they have determined that their devotion to mandatory gay marriage in all 50 states trumps any allegiance to religious liberty under the First Amendment,” Cruz told the ballroom. “We’ve got an obligation, as this conference recognizes, to be watchmen on the wall.”

The Watchmen on the Wall briefing is sponsored by the Family Research Council to connect pastors with policy and legislation. The group has more than doubled in size since the last year—there are now more the 38,000 Watchmen pastors in the U.S., up from 16,000 in 2014, according to the Family Research Council. Last year, the group told TIME it wanted to grow the Watchmen to 40,000 pastors by 2015 in advance of the 2016 election.

Cruz’s father Rafael, a pastor with strong conservative evangelical ties, introduced him—“hopefully the next president of the United States”—to the group after joking to Family Research Council leadership that he expects “to be sleeping the Lincoln bedroom.” Last year, Rafael Cruz gave a speech to the Watchmen on the five principles of whom the Bible tells them to vote for. “My son will not compromise his principles in Washington,” he reminded the crowd on Thursday.

In his remarks, Ted Cruz portrayed religion in America as under “assault” and referenced “heartbreaking” religious freedom battles in Indiana and Arkansas, where state lawmakers backed down from laws that critics said would allow discrimination against gays and lesbians.

He also used the moment to set himself apart as a candidate for president. “Let me tell you something that was even sadder, was just how many Republicans ran for the hills,” he said. “I’ll point out some of the Republicans running in 2016 were nowhere to be found when Indiana was being fought. I will tell you this—I will always, always, always stand and fight for religious liberty of every American.”

The audience erupted in applause. Cruz clapped along with them. Someone started blowing a shofar, a traditionally Jewish liturgical instrument often made from the horn of a ram.

Cruz also touted his experience as solicitor general in Texas fighting against atheists at the Supreme Court and defending a veterans’ cross memorial in the Mojave Desert. And he attacked the White House’s response to ISIS—“They are crucifying Christians….They are beheading children. You cannot win a war on radical Islamic terrorism with a president who is unwilling to utter the words, radical Islamic terrorism”—and aligned himself instead with Pope Francis, who has called for these Christians to be protected.

Cruz received at least three standing ovations during his 24-minute talk. He urged the pastors to influence their churches and networks to vote. He claimed that 45 million evangelical Christians do not vote, and that their votes are needed to get America back on track. “God isn’t done with America yet,” Cruz said. “You are warriors spreading the truth. The truth will set us free.”

Cruz took the stage after Wayne Grudem, a theology professor at the evangelical Phoenix Seminary known for his teachings that men have spiritual leadership over women. Grudem compared Family Research Council president Tony Perkins to Martin Luther King Jr., saying Perkins is a modern day King for standing up for Christian beliefs against the government. Earlier in the morning, the Family Research Council’s vice president of church ministries, Kenyn Cureton, spoke against gay marriage and led the crowd in a rousing chant of “I am a soldier of the cross. Here I stand!” 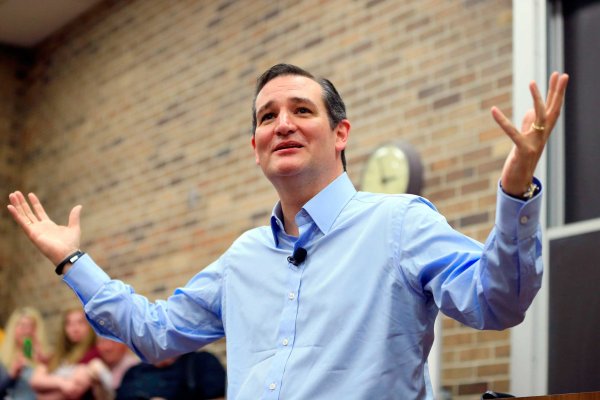 What the Flap Over a Ted Cruz Dinner Means
Next Up: Editor's Pick