Prayuth, with his top officers, addresses reporters in Bangkok on May 26 last year after taking power as the head of the junta.
Erik De Castro—Reuters
By Charlie Campbell

Each april, Thailand celebrates its New Year, marking the onset of the monsoon rains and the bounty of the rice harvest. The festival is not just the playful dousing of family and friends with water, signifying the cleansing of sins and bad luck. It is also a period of reflection, including the symbolic asking for forgiveness by young Thais for their youthful indiscretions.

This year was different. At Wat Umong, a 13th century Buddhist temple outside the northern city of Chiang Mai, a group of esteemed elder Thais instead begged forgiveness from the younger generation. The reason was the nation’s latest military coup—the first anniversary of which falls on May 22. “We can only offer you our deepest apologies and ask for forgiveness for our clumsiness, weakness and lack of wisdom,” said renowned history don Nidhi Eawsriwong about the loss of democracy. The overture was poignant and astonishing. In Thailand, age is so revered that even twins born minutes apart refer to each other as the “older” or “younger” sibling.

The reasons for last year’s putsch are myriad and complex, but can be summarized as an elitist clique—comprising generals, royalists and judges—refusing to cede power to a Thai majority. Ousted Prime Minister Yingluck Shinawatra, elected by a landslide in 2011, was impeached, and a new constitution stands to drastically increase the powers of unelected bodies.

Yingluck is the sister—and, many say, proxy—of the divisive former Prime Minister Thaksin Shinawatra. Populist policies saw him adored by poor voters in Thailand’s populous, agrarian north but reviled among wealthier urbanites. He was likewise removed, in 2006, in a coup, and lives in exile.

Thailand today bares all the hallmarks of a dictatorship: fiercely suppressed dissent, draconian censorship and the subjugation of the political opposition. Hundreds have been arbitrarily detained for trifling signs of protest such as publicly reading George Orwell’s 1984 or flashing the three-finger salute from The Hunger Games. Plus the nation has a bumptious tyrant at the helm.

Every Friday, General Prayuth Chan-ocha appears on national television to unleash a diatribe on Thailand’s supposed failings. Water hyacinths clogging Bangkok’s Chao Phraya River? Children failing schoolwork? Too much debt? Prayuth has farcical homespun remedies for all, like “stopping shopping” for those in arrears. He also complains of “curses” and “black magic,” and threatens to “execute” journalists.

But this isn’t a joke. Thailand’s regression is mirrored across much of Southeast Asia—only Indonesia and the Philippines can truly be considered ruddy democracies—which spells bad news for the region’s 600 million people as well as U.S. President Barack Obama’s oft-touted “rebalancing” toward Asia. The White House’s response to Prayuth has been muted, with some mild rebukes and the legally required rolling-back of security assistance to Thailand. “Fundamentally we have to stay heavily engaged in this region,” says a senior U.S. State Department official. “It is hugely important, and reducing engagement doesn’t do any good for democracy and human rights.”

The problem is that engagement can also be read as indifference. That’s the message when Obama plays golf with Malaysian Prime Minister Najib Razak in Hawaii, and just weeks later the nation’s opposition leader is jailed, yet again, for yet another dubious charge of sodomy. Or when the Cobra Gold military exercises continue with a junta-run Thailand, albeit in reduced form. Or when thousands of Rohingya are forced to flee Burma, but the U.S. President visits the country twice in two years.

One reason for Washington’s kid-glove approach is the Trans-Pacific Partnership, the Obama Administration’s free-trade proposal that involves a dozen nations ringing the Asia-Pacific region. In the face of growing antagonism from Beijing and Moscow, building support for the deal within Southeast Asia has taken on new significance.

Another factor is China’s growing influence in the region. Beijing is ramping up investment across Southeast Asia. Since China’s money comes without human-rights strings, the U.S. finds itself pressured to go easier on backsliding regimes like the Thai junta. The upshot is that “democracy and human rights have evaporated from Washington’s agenda in the region,” says Bridget Welsh of the Center for East Asia Democratic Studies at National Taiwan University. Continued engagement, says Welsh, “legitimizes acts of repression.”

If that happens, Thailand’s youths will be hearing more chastened apologies from their elders next New Year. 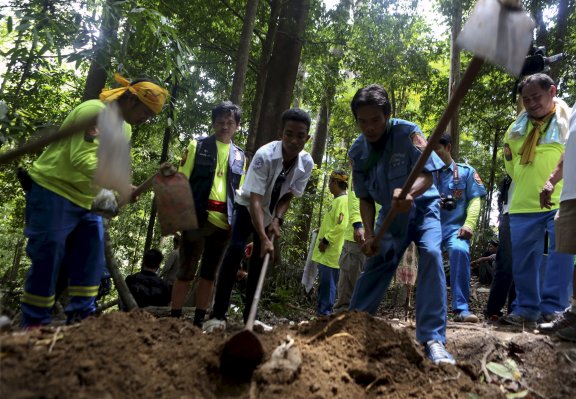 Jungle Graves in Thailand Spotlight the Plight of the World's Displaced Peoples
Next Up: Editor's Pick