The Problem With White-on-White Crime

As I was walking through the airport preparing to board a flight home, I was drawn to a big-screen television, around which a sizable crowd had assembled. With the NBA playoffs in full affect, I assumed it had to be one of the games so I stopped to check the score. What I saw instead was live coverage of a breaking news story out of Waco, Texas, about a bikers’ shootout that had left nine people dead.

Almost immediately, I had a hard time matching the pictures I was seeing with the chyron I was reading across the bottom of the screen.

9 DEAD. 18 INJURED. CHAINS. KNIVES, CLUBS, FIREARMS. read the crawl at the bottom of the screen.

Yet while I saw yellow police tape, I didn’t see scores of motorcyclists in handcuffs. In fact, I saw them standing around, sitting on the grass, drinking from water bottles, talking to each other, conversing with cops.

In the hours to come, I noted that newscasters and pundits were referring to these cyclists as “motorcycle club members” not “thugs.” They had in no way been brutalized by the cops. The National Guard had not been called in — no tear gas, no pepper spray. None of that, even though the crawl was now telling me that this was the worst violence in Texas since the Branch Davidian siege back in 1993.

I got home late Sunday night, woke up Monday morning, and the news was still referring to the melee as some variation on Motorcycle Clubs Clash in Texas City.

It took 2 days since my pause in front of that airport television to see the G-word anywhere: gangs.

170 gang members have now been arrested and charged with engaging in organized crime linked to capital murder, with perhaps more to come. But why the law enforcement, mainstream media and societal deference in the first place?

I know why, and you know why, even if we don’t want to acknowledge it.

Yes, here we go again. Sadly, we keep missing these moments, overlooking these opportunities to get our house in order.

I can hear the deafening sound of readers asking, “Why do we have to make everything about race? Must we see everything in black and white?”

No, we do not. But with our unconscious biases, we tend to.

Do we really think if this were a fatal clash involving black “club members,” say Bloods and Crips, where nine people were killed and eighteen were injured in a shootout with cops, that this story would be covered in the same way? In two words: Puh. Leeze.

That said, I actually think there is significant value in viewing the American experience in black and white. When we dare to witness the world in black and white, we can see it in a more honest and straightforward way — think of a photograph. We can see the grittiness, the dark side of life in America that too many fellow citizens endure daily. We can see the subtle differences and variances that make life less fair for certain communities. We can simplify the struggle and focus on what’s important in the lives of everyday people. We can see the shapes and the lines, the boxes in which we put too many American citizens.

When we look at our country in black and white, we are forced to pause, to look closely at our reality. We strip America down to its bare essentials and we see who we really are, how well our image holds up to the ideals we profess.

So, must we see everything in black and white? Why shouldn’t we? 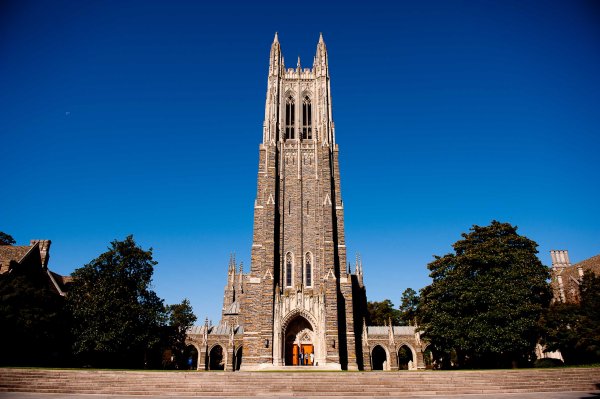 Duke Professor on Leave After Racially-Charged Comments
Next Up: Editor's Pick