On the right is part of the first image taken with NASA's Hubble Space Telescope's (HST) Wide Field/Planetary Camera. It is shown with a ground-based picture from Las Campanas, Chile, Observatory of the same region of the sky.
Ground Image: E. Persson (Las Campanas Observatory, Chile)/Observatories of the Carnegie Institution of Washington; Hubble Image: NASA, ESA, and STScI
By Jeffrey Kluger

It ain’t much, is it? For all of the jaw-dropping, eye-popping, gobsmacking images the Hubble Space Telescope has sent home over the years, the smudgy, black and white picture above right is in some ways the most important. That’s because it’s the first picture the telescope took, on May 20, 1990—a quarter century ago.

The subject of this first-ever cosmic screen grab was the binary star HD96755 in the open cluster NGC 3532, about 1,300 light years away. HD96755 is the vaguely snowman-shaped object at the top of the image; the smaller one, below it and to the right, was a stellar bystander that simply photo-bombed the image. NASA released the picture along with a second one, top left, taken of the same objects by a ground-based telescope in Chile’s Atacama Desert, to show that the $2.5 billion Hubble could do a better job. Which it did. A little.

There were a lot of reasons that first picture was so unremarkable—and they had little to do with Hubble’s famously warped mirror, a flaw that engineers would discover only slowly and that NASA would not confirm and announce until nearly a month later. Rather, the initial shot of HD96755 was intended simply what’s known as a first light test.

“First light implies that the light goes all the way through the optics and makes its way to the detectors,” says Dave Leckrone, who was a Hubble deputy project scientist at the time and was the senior project scientist from later in 1990 to 2009. “It’s only when that happens that you can say first light has been achieved.”

That flushing of the pipes typically happens away from the eyes of the press, since first light images are notoriously lousy. In the case of Hubble, the disappointment would be even keener, because the telescope had been so highly touted for so long that anything less than a full-color glimpse into the very heart of the universe was bound to disappoint.

But an overzealous public affairs officer invited the media to be present at the Goddard Space Center when Hubble first opened its eyes, and the press obliged, filling the visitors’ center where a viewing screen was in place. “The astronomers groaned when the media was invited,” recalls Leckrone. “And everyone was a little perplexed and uncomfortable when the image came in because it was so out of focus. Someone said ‘Is that the way it’s supposed to look?'”

NASA didn’t help matters by releasing the picture with the boast that it was 50% sharper than what the Chilean telescope could do. That was a decidedly minor accomplishment that seemed all the worse since it required an exposure 10 times as long—30 seconds for the telescope in space compared to just three seconds for the one on the ground.

Hubble engineers promised the pictures would get better as they calibrated the telescope’s instruments, and they had a lot of tricks to try—including adjusting 24 pressure pads that lined the back of the primary mirror to compensate for any change in shape caused by going from the 1 g of Earth to the zero g of space. But nothing the space agency tried worked and it would not be until December of 1993 that the space shuttle Columbia would ride to the rescue, bringing Hubble a set of corrective optics that would restore its vision to what it was supposed to be.

Those three and a half years seemed like a long time to wait back then. But they turned out to be nothing compared to 25 years worth of images that have resulted—and the dazzling look they’ve given us billions of years into the universe’s past. 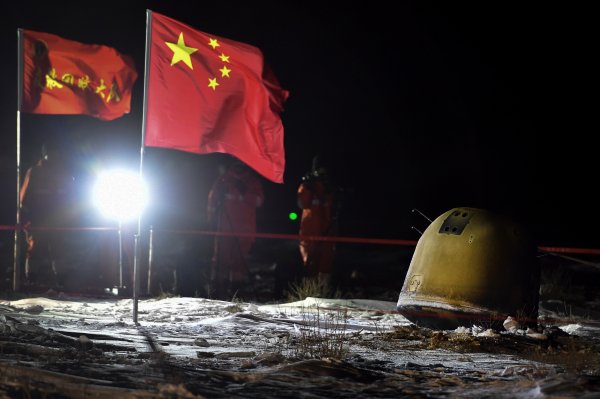