Presidential legacy building and midterm elections rarely go hand-in-hand. Take the 2010 elections: many conservative Democrats campaigned against the President. Indiana Democrat Joe Donnelly, for example, ran television ads disassociating himself with the President, House Speaker Nancy Pelosi and Senate Majority Leader Harry Reid. Donnelly did so well with that message, he won a Senate seat in 2012.

Ahead of the midterms this November, it’s not just the rank and file shrugging off Obama’s short coattails and betting on running against him. Senate Foreign Relations Committee Chairman Bob Menendez has criticized the President for dragging his feet on Iran. Within hours of Obama’s State of the Union last week, Reid bashed one of the President’s centerpiece goals: passing two historic trade deals. Incoming Senate Energy Committee Chair Mary Landrieu has pushed Obama to approve the Keystone pipeline, while the outgoing chair Ron Wyden has pushed Obama not to approve it. Environmentalists say the pipeline will do damage, whereas businesses say it’ll bring in thousands of much-needed jobs.

As Democrats look increasingly likely to lose the Senate come November, vulnerable Senate Democrats such as Louisiana’s Landrieu, Arkansas’s Mark Pryor and Kay Hagan of North Carolina have distanced themselves from the ever-unpopular Obamacare. Hagan even declined to be seen with Obama when he visited her state last month, citing conflicting schedules. Other Dems are upset that the President has yet to close Guantanamo, end the war in Afghanistan or seriously curb the National Security Agency’s collection of metadata exposed by Edward Snowden.

All of which must have made for interesting fodder when Reid and Obama sat down for a tet-a-tet with Obama at the White House Monday afternoon. Indeed, the two leaders had so much to discuss, trade didn’t even come up in the meeting, sources say.

Running against Washington dysfunction isn’t new. It was the theme of Obama successful reelection campaign in 2012. The only question is, if the Democrat’s big umbrella is shrinking, who gets wet? For the next nine months, as he was perhaps telling the President today, Reid may need Obama to get a little soggy. 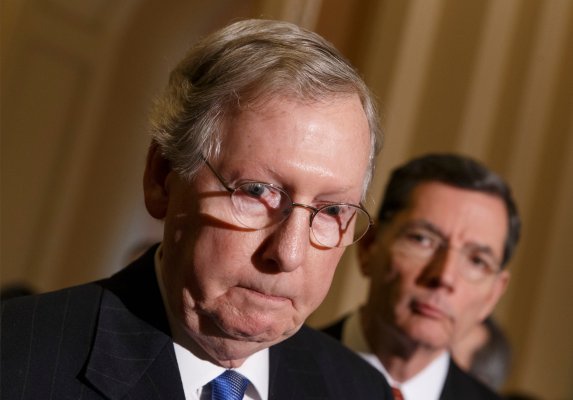 McConnell Laments Loss of Minority Rights in Senate
Next Up: Editor's Pick