For decades, Indonesian women wishing to join the armed forces and police force, and also those planning to marry military officers, have had to quietly undergo a humiliating procedure known as the “virginity test.”

It’s a dirty secret that wasn’t made public — until Human Rights Watch began highlighting the practice. In a report released last week, the New York City–based advocacy group called for Indonesia’s military to stop imposing virginity tests on female recruits and fiancées of military officers — six months after revealing that Indonesia female police candidates were required to take the test.

“They argue that they want the physically and mentally best candidates to join the armed forces,” Andreas Harsono, Indonesia researcher at HRW, tells TIME. “It’s the same logic in seeking military wives. They consider a virgin is mentally healthier than a nonvirgin. They reportedly often say, ‘How could you defend the honor of our nation if you cannot defend your own honor?’”

General Moeldoko, the military commander, sees nothing wrong with the practice. “It’s a good thing, why criticize it?” he told journalists last Friday. The virginity test “is a measure of morality. There’s no other way,” he added.

His reaction echoed that of a high-ranking police officer. The head of the national police law division, Inspector General Moechgiyarto, said the test was necessary to maintain the police force’s moral standards. “If she [a candidate] turns out to be a prostitute, how could we accept her for the job?” he said last November. (Other police officials denied the practice, though. Then national police chief General Sutarman said that same month that female recruits were required to undergo medical examinations, not virginity tests.)

The invasive two-finger virginity test, which the World Health Organization slams as having “no scientific validity” and which Indonesia’s National Commission on Violence Against Women condemns as a form of sexual violence, is a recurring topic in Indonesia. Public officials and legislators frequently float an idea to impose virginity tests, particularly on schoolgirls.

Last February, a city councilor of Jember, in eastern Java, suggested that graduating middle-school students should be required to take virginity tests. “If she is not a virgin, she can’t graduate,” he said. In late 2013, the education chief of Prabumulih, in South Sumatra province, proposed the test as a requirement for female students to enter high school. Both ideas, as with others, were shelved following public outcry.

But why is Indonesia so enamored of the idea of virginity? The authoritarian New Order regime may be gone, but its idea of women as a symbol of the nation’s moral guardian is still very much alive, says Lies Marcoes, a women’s-rights activist and medical anthropologist. In the democratic reform era, the rise of religious conservatism and the sense that moral values are under siege have made the idea even stronger. “Virginity has become more sacred,” Lies says. “For state institutions like the military, virginity test is a ‘moral’ symbol to cover up what is rotten.”

It is estimated that female officers comprise just 3% and 2% of the police and the armed forces, respectively. Male police and military officers far outnumber their female counterparts, but no officials have ever mentioned what test is required to gauge the men’s morality.

The use of virginity testing has been documented in several other countries. In Afghanistan, women and girls accused of “moral crimes,” such as running away (often from an abusive home or forced marriage) or extramarital affairs, are often subjected to the test. Despite a court ruling condemning the practice, virginity tests are still illegally used in Egyptian detention facilities. India has not yet systematically put in place a new protocol banning the test on rape survivors across the country.

It is unclear when Indonesia’s police and armed forces began conducting the virginity test, but HRW interviewed women who took the tests from as far back as the 1960s. Female military candidates are usually tested en masse at military hospitals, in large halls that are divided into curtain-separated examination rooms. “Those who defend the virginity test believe in junk science,” says Harsono of HRW. “They believe if [a woman’s hymen] is torn between 11 o’clock and 1 o’clock, it’s due to accidents. If it’s torn at 6 o’clock, they believe the woman has had active sexual activities.”

Irawati Harsono, commissioner at the women’s commission and a retired police officer, had to take the test when she joined the police force three decades ago. “As a woman who experienced it, I felt the test was very discriminatory and degrading,” she says. “Nobody could forget it, which means it is a traumatic experience.”

One retired air-force officer recalled she couldn’t have sex with her newlywed husband during their honeymoon, four years after she took the test. “My body was so stiff. I couldn’t open my legs,” she said, as quoted by HRW. “It was because of the trauma that I had with that ‘virginity test.’”

Following the HRW report last week, several lawmakers called for an end to the virginity test, saying there is no connection between virginity and morals. Interior Minister Tjahjo Kumolo had promised in December that he would scrap virginity tests for women joining the civil-service colleges.

Activists urge President Joko Widodo to abolish it, but the Indonesian leader, a social conservative, has so far been reticent on the issue. And there is little expectation of a major reversal on the attitude or policy. “The more the public thinks the nation’s morals are in disarray,” Lies says, “the stronger is the pressure on women to guard the symbol of purity, which is measured with the most ancient parameter that lies in the subconsciousness of patriarchal men: ‘virginity.’” 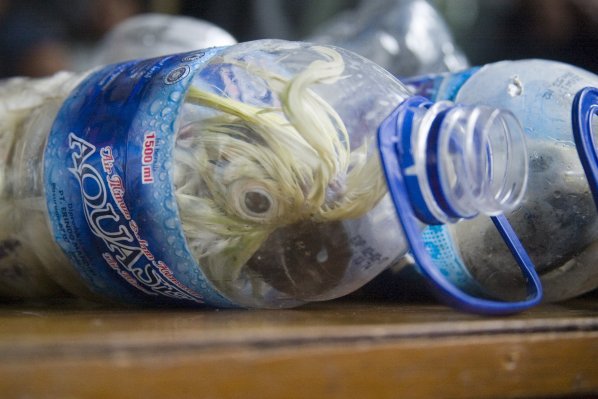 Endangered Cockatoos Found Stuffed in Plastic Bottles in Indonesia
Next Up: Editor's Pick