When “I’d Like to Buy the World a Coke” played out the final scene of Mad Men on Sunday night, it took social media by storm—but one of the tune’s songwriters, Roger Greenaway, had no idea it was even being used.

Greenaway, who admits he hasn’t watched Mad Men, tells TIME he woke up to an email about the news this morning, and says he was “amazed” to hear about it. As he recalls, the iconic jingle that first aired in 1971 might have never made it to primetime without a bit of luck.

The songwriter and a partner, Roger Cook, had come up with the melody while on vacation in Portugal, and later played it for McCann-Erickson employees on the Coca-Cola account. As has been widely reported, creative director Bill Backer got held up in Ireland due to bad weather on his way to meeting with the songwriters in London, and was inspired by the sight of fellow travelers chatting over bottles of Coke. That gave birth to the lyrics about buying the world a coke and keeping it company.

The song was at first only meant to be a commercial for radio, Greenaway says, not TV, and when it hit the airwaves in the U.S., he adds it was hardly a smash hit—there was “basically no good or bad response to it.”

Coca-Cola’s website states that Backer “put his creative team to work to come up with a visual concept” for the song, but as Greenaway recalls, it happened more organically.

As he remembers, another McCann employee, Harvey Gabor, came up with the idea of doing an ad that featured young men and women of different nationalities singing together on a hilltop with Coke bottles in their hands. According to Greenaway, Gabor told Backer: “I’m sure this will work, but I need something musically anthemic. Do you have anything in the musical library that would suit such an idea?” Backer suggested listening to the commercials they’d recorded for Coke in the last few years, some by Greenaway and Cook and some by other writers. After listening to for a few days, he picked “I’d Like to Buy the World a Coke.”

This time, when the song played on television, it was a huge success. Within a week, Greenaway says, thousands of people had sent letters to the Coca-Cola headquarters asking where they could find the music.

“Had it not been for Harvey Gabor and his idea with the kids on the hill, it would probably have never seen the light of day,” Greenaway says. “That’s what we in the business call luck.” 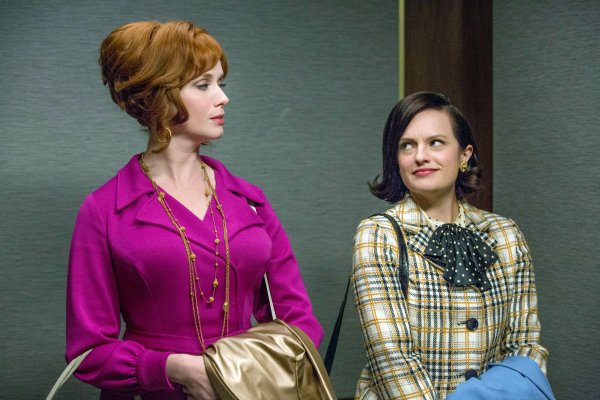 The Fate of Mad Men’s Women and Feminism
Next Up: Editor's Pick