Google Has a Crazy Fun Job Opening on its Doodle Team

Ever notice those whimsical designs on Google’s homepage that commemorate a holiday, person, or historical anniversary?

The search giant is looking to hire a new person to create them, according to a new job listing for what’s known as a
Doodler.” This person will “have the world’s best platform to showcase your stylistic skills, as well as your sense of humor, love of all things historical and imaginative artistry,” the listing says.

It may seem like a silly job. But only candidates with serious “doodle” chops need apply. Google is looking for candidates with a degree or equivalent experience in fine arts, skills in two or more disciplines like graphic design and 3D modeling, and a strong portfolio of past work across various media.

The first Google Doodle appeared in August 1998, when Google founders Larry Page and Sergey Brin went away to Burning Man, a music and art festival in Nevada, and wanted to tell users they’d be away for a few days – just in case something happened. Since then, the company has gone on to feature Doodles for all major holidays, as well as many other occasions in between. Some of the notable people Doodles have celebrated include Andy Warhol, Albert Einstein, Leonardo da Vinci, Ella Fitzgerald, John Lennon, Mahatma Gandhi, and Jules Verne.

A few designs have also drawn criticism (or rather, the choice of what to doodle and what not too). For example, Google got some grief for skipping doodles for Memorial Day and Veterans Day in 2007. It also received criticism for commemorating activist Cesar Chavez instead of Easter in 2013.

For the past few years, Google (GOOG) has also held its Doodle 4 Google contest, giving the chance to children in K-12 around the country to compete for various prizes. One lucky winner has his or her design featured on Google’s homepage. 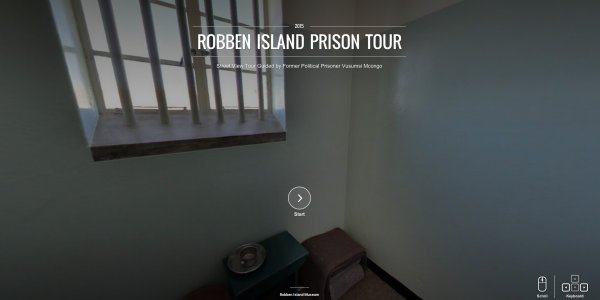 Take a Google Tour of Nelson Mandela's Island Prison
Next Up: Editor's Pick