How to Get Past the Most Destructive Word at Work

Like many children of immigrant families, I grew up in a strict household in which the focus was on staying in line. My grandparents and various aunts, uncles and cousins all lived with us from when I was in middle school through high school after they emigrated from India. They had a deep, old-world mindset and were anchored in the traditional thought patterns of Indian culture.

I remember once when I was eating ice cream and my brother entered the room. My grandmother actually took the ice cream bowl right out of my hands and gave it to him. Apparently, I was wasting the ice cream by eating it. At dinner parties, the women cooked all the meals, served the men as they ate, and then the women ate and cleaned up. If we suggested alternatives to the established rules, the answer was always, “No.”

In high school, I volunteered at the temple, and we organized a medical camp to help community members without insurance get basic medical tests and checkups. During a follow-up event to thank the volunteers, the male head of the temple addressed only the male audience and thanked them. He then asked a female volunteer to address the women, but never once looked in the direction of the women. I was very annoyed, to say the least; we had all done the same work and put in the same number of hours, so why hadn’t we gotten a thank-you speech from him too?

I had always been bothered by the way the temple treated women. And my parents, who are not as traditional as the head of the temple, supported my independent thinking. My dad arranged a meeting with that senior temple member, and I asked him why he was so dismissive of the women and why there were separate entrances and seating areas for females and males. I grew up with boys in school and around the neighborhood, and I wanted to sit with my friends. He told me that the genders had to be separated so that the women didn’t distract the men. The idea was that if they separated the genders, the men would focus on the sermons and not be “lured” by the seductive women. I believe my precocious teenage words were, “Why can’t you just get rid of the men who can’t focus? Seems like you’re solving for the symptom, not the problem.”

I think this is where my passion for truly understanding the problem and reframing it as an opportunity originated. Often, the problem is that we hold both beliefs and opinions are true and treat them as facts and even irrefutable laws. As a result, these turn into mental blocks that prevent us from seeing any space in which to innovate.

Revisiting these childhood memories of feeling stuck inspired me to challenge others to break out of established conventions. It’s about thinking through the myriad choices and not feeling constrained by the “no”s. Everywhere you look, we try to simplify and limit choices: think of a box of Crayola crayons, for example. The world is filled with thousands of colors, but we limit ourselves to eight, twenty-four, sixty-four, or ninety-six, if we are lucky. We limit our choices, thinking we are making things simpler and more streamlined. Too bad people aren’t simple by nature.

We tend to approach choices in black and white: “A” or “B,”this way or that way. You process choices this way because it’s easier, simpler, and helps you finish this whole decision-making thing quickly. Often, they seem like polar opposites, and you have, which I borrow from Dr. David Schnarch’s work on relationships and communication, a “two-choice dilemma” to figure out. You want two things at the same time but can’t really have both (to eat ice cream and lose weight, to be heard and have no conflict in your life, to sleep in and rest and get up early to get things done).

However, when you think of choices in that way, you focus on what you will either win or lose, instead of coming up with alternative ideas. When you are focused on making a choice, you’re not aware of the universe of options that could be yours. A creative mindset, which encompasses your beliefs and attitudes, is about living in the gray area — those spaces between black and white, “A” and “B” — and thinking expansively.

Creative ideas come out of the gray. A slight reframe from seeing gray as boring and dull to seeing it as a “kaleidoscopic gray” allows you to see beyond the “no”s. The exciting spectrum of gray is overflowing with possibilities and shimmering with potential. This space gives you the ability to access the creative mindset, in which there are always better options or solutions. No one telling you “no,” and there is no notion of “I can’t” or “I shouldn’t.”

The creative mindset means thinking about what you could do if choices were infinite. It means feeling confident that you could figure out a way around the real constraints if given the opportunity. And to do just that, we need to recognize and let go of the “no”s we carry from our past and present. Or at least put them aside for a while, so that we can allow possibilities to emerge out of the gray.

Adapted from the forthcoming book Reframe: Shift the Way You Work, Innovate, and Think (May 2015) by Mona Patel.

Mona Patel is Founder and CEO at Motivate Design and UX Hires. She is the author of Reframe: Shift the Way You Work, Innovate, and Think.

The Young Entrepreneur Council (YEC) is an invite-only organization comprised of the world’s most promising young entrepreneurs. In partnership with Citi, YEC recently launched BusinessCollective, a free virtual mentorship program that helps millions of entrepreneurs start and grow businesses.

This article was originally published on BusinessCollective. 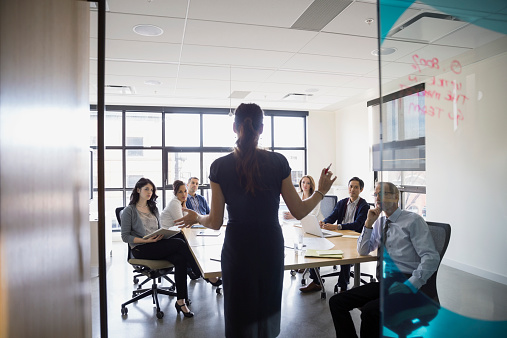 7 Ways to Go From a Boss to a Leader
Next Up: Editor's Pick