The Next Irish Revolution: Same-Sex Marriage

While Americans are waiting to hear whether the Supreme Court will bring marriage equality to all fifty states, millions of Irish voters will be going to the polls to make the same decision in a national vote on May 22. Will very-Catholic Ireland beat the somewhat-secular United States to the finish line on same-sex marriage?

Answering this question requires a closer look at today’s Ireland. For most people in the U.S—aside from celebrating St. Patrick’s Day—knowledge of Ireland begins and ends with the country’s deep roots in the Catholic Church. Considering the Church’s stance on homosexuality and the cultural conservatism it’s promoted in Ireland, the odds would seem pretty slim for a national gay marriage referendum to pass.

So it’s not surprising that the Church continues to oppose even civil marriage for Irish same-sex couples. However, in the possibly kinder-and-gentler Pope Francis era, the Church has also had its say in a very different voice. The Archbishop of Dublin called for the referendum debate to be “carried on rationally and with respectful argument.” He even chastised some opponents of marriage equality for using language that “is not just intemperate but obnoxious, insulting, and unchristian in regard to gay and lesbian people.”

Though its call for compassion has been sung in a different key, the Church’s arguments for a No vote have a familiar ring, even when toned down. When I visited Ireland in March to give a lecture on the research on marriage equality around the world, I heard many common concerns: Marriage will be redefined. Children will be harmed. Same-sex couples can get civil partnerships, so they don’t need marriage.

A large and growing international body of research says otherwise, though. The sky doesn’t fall on heterosexual marriage, and children of lesbian, gay, and bisexual parents do just fine. Civil partnerships might do as much harm as good, reminding same-sex couples of their second-class status. Same-sex couples and different-sex couples alike reject alternatives to marriage when they have the choice—everybody prefers marriage.

But the Church isn’t calling the shots. As it has before with divorce, birth control, and other issues, the Irish public is listening to the arguments and will make up its own mind about individual and collective choices that go against Church teachings. The May 22nd referendum emerged from a 2013 joint citizen-politician Constitutional Convention, with 79% of members supporting a marriage equality constitutional amendment. Two years later, opinion polls show that a clear majority of the Irish public is planning to vote yes.

Younger Irish people are out in front of the charge for equality. In a recent poll, 90% of 18-35 year olds said they would vote yes. They want to live in a country that’s in step with global trends and modern ideals of equality. Tommy Meskill, age 20, told the Irish Times, “I don’t want to be associated with a country who would say no to marriage equality, and I don’t think most people my age would want to be, either.”

The 20-somethings are bringing their elders along by any means necessary. The Twitter hashtag, #RingYourGranny, shows videos of students calling their parents and grandparents and having real conversations about why marriage equality is important.

Not to be outdone, a steady stream of parents of lesbians and gay men are coming out publicly to support their children who want to marry a same-sex partner. As one activist put it, even the old curmudgeons understand the importance of marriage as a solid foundation for same-sex couples and their families.

Those parents have been joined in their support by cultural icons ranging from the Irish hurlers (a traditional Irish sport) who want their gay teammates to be able to marry, to the prime minister and prominent Catholics like former president Mary McAleese. A Donegal priest recently made the news with his pledge to vote Yes. Every mainstream political party in Ireland supports a Yes vote, and some are contributing their members to a door-to-door campaign.

Even with this support, the marriage equality advocates aren’t resting on their lead in the polls. Turnout is often low for these referenda. Only a little more half of those enthusiastic young people say they are likely to vote this time around. And the political old-timers remember that divorce was voted into the Irish constitution in 1995 with a margin of fewer than 10,000 votes out of 1.6 million—about one vote per polling place according to a marriage equality leader.

Church bishops are gearing up in the closing weeks of the campaign, and priests are delivering the No vote message directly to their parishioners at Mass this month. The Yes supporters expect some narrowing of the opinion polls as voters make up their minds and firm up their opinions. This vote could be a squeaker.

If the polls are correct, though, Ireland will be the first country in the world to give same-sex couples the right to marry through a popular vote. That this political milestone could happen in a Catholic country will have global implications. Ireland will join a handful of more secular Catholic countries that allow same-sex couples to marry—Spain, Portugal, France, and Argentina. But Ireland will be the one with a blueprint for a successful national campaign to take to Eastern Europe, Latin America, the Philippines and other more conservative Catholic countries as marriage equality continues to spread around the world.

M. V. Lee Badgett is a professor of economics and director of the Center for Public Policy Administration at the University of Massachusetts Amherst. She is also a Williams Distinguished Scholar at the Williams Institute at UCLA School of Law. This piece was originally published in New America’s digital magazine, The Weekly Wonk. Sign up to get it delivered to your inbox each Thursday here, and follow @New America on Twitter. 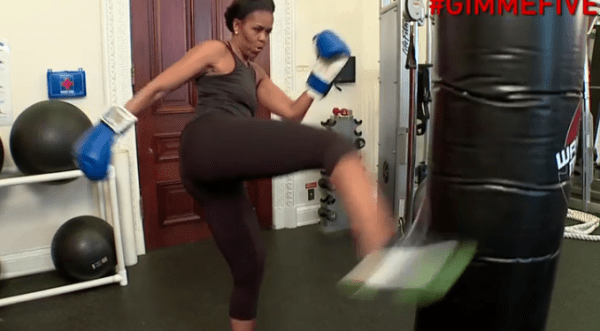 This Is Michelle Obama's Workout Routine
Next Up: Editor's Pick