Why Hillary Clinton's Campaign Isn't the Most Liberal Ever

A number of Beltway pundits have recently decided that Hillary Clinton is not just running a liberal campaign, but perhaps the most liberal campaign in decades. But that’s not entirely accurate.

Just as you can’t step into the same river twice, no presidential campaign ever faces the same electorate. And on a range of issues, America has become more liberal since the last time Clinton ran.

Without exception, the positions that have been cited as “boldly liberal” are entirely in line with mainstream public opinion.

Take gay marriage, which Clinton endorsed in 2013. As of last year, 6 in 10 Americans—and a whopping 74% of Democrats—were in favor of it too, according to a recent NBC/Wall Street Journal poll.

Or immigration. Last week, Clinton was congratulated by many liberals for backing a broad path to citizenship for roughly 11 million undocumented people. But in an NBC/WSJ poll last fall, 60% of Americans were in favor of a “path to citizenship” and nearly 75% were even more in favor of it if the plan involved asking immigrants to jump through certain hoops, such as paying back taxes.

Or criminal justice reform. Last week, Clinton called for reforming sentencing laws and reducing how much military-grade equipment is funneled off to police departments. But as of last year, that’s pretty much exactly where most Americans were, too: 63% were against mandatory minimum sentences for non-violent crimes, according to Pew Research, and nearly 60% thought militarization of police had gone too far.

The same is true on other socially liberal issues that Clinton has backed lately, much to the delight of the liberal base, including better gun control measures, a minimum wage increase, and paid family leave. As of 2013, 91% of Americans supported mandating criminal background checks before someone is allowed to purchase a weapon, and 60% supported reinstating a ban on assault weapons, according to Gallup. Roughly two-thirds of Americans are now in favor of raising the minimum wage and 60% believe that employers ought to give paid time-off to employees when they’re sick, according to a February AP-GfK poll.

In early May, liberal activist groups claimed victory after Clinton’s campaign manager, Robby Mook, hinted that the Democratic front-runner would soon announce a comprehensive plan to make college more affordable. But again, she’s right in line with most Americans. According to the Harvard Institute of Politics, 79% of Americans described student debt as “a problem” that needs to be addressed.

At the same time, Clinton has kept mum on some liberal ideas that are more divisive. She’s avoided taking a stance on President Obama’s big new free trade deal, the Trans-Pacific Partnership, which many liberals have criticized. While she’s made some populist remarks about reining in Wall Street, she’s stopped short of getting specific on liberal ideas like capping CEO pay or breaking up the big banks. And she’s not taken a definitive stance on the construction of the Keystone XL oil pipeline, which has become a signature issue for environmentalists hoping to address climate change. 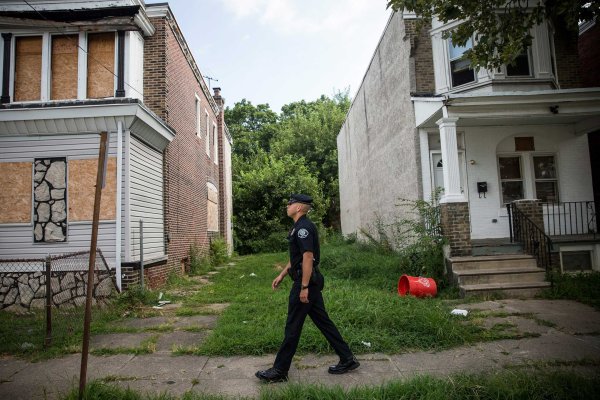 How Camden Became the Poster Child for Police Reform
Next Up: Editor's Pick