Taylor Swift’s “Bad Blood” music video, which premiered last night during the Billboard Music Awards, made news for its massive cast, including Swift pals ranging from Lena Dunham to Mariska Hargitay. But the video was not, really, an ensemble piece; it was all about Swift and, in particular, her newfound ability to reinvent herself. While it is not Swift’s best music video, it is the first that indicates Swift may be able to reinvent herself at the rapid pace contemporary pop demands.

During her first four album cycles, Swift was promoted as a country artist, and her videos were appropriately lo-fi. They also all advanced the same idea of Swift, as a slightly goofy but very sweet girl; from “You Belong With Me” to “22,” she always seemed to be playing herself in her clips. This represented a meaningful difference from practically every other artist at Swift’s level of popularity. Lady Gaga and Rihanna, in their own ways, redefined their respective images with each elaborately staged clip, while Beyoncé made a whole album of videos in which she changed her look and her whole mien every four minutes or so. Katy Perry, the putative subject of “Bad Blood,” has played an alien, an Egyptian queen, and a 1980s teenager in various of her videos.

It’s only recently, with her declared shift from country music to pop, that Swift has joined in the game that every one of her contemporaries is playing. And given her acuity at all aspects of the music industry, it’s no surprise that she’s winning it. Last autumn’s big-budget, high-concept “Blank Space” video, in which Swift played a Gone Girl version of herself as an alluring psychopath, allowed Swift to demonstrate both a sense of humor about herself and a wardrobe even more elaborately glamorous than what she wears on red carpets. And in “Bad Blood,” Swift plays a character in a more literal sense, costumed like an assassin and performing elaborate stunts. (She’d previously done little more physically taxing, in her videos, than pretend she’s a bad dancer.) Swift has gone from putting herself forward in her videos to using them as a tool to explore various sides of her personality, and create others.

There’s absolutely nothing in the playground-chant-y “Bad Blood” that lends itself particularly well to a Sin City homage, which is the ultimate proof Swift knows what she’s doing. The most successful modern music video artist, Madonna, tended to pair visual aesthetics with entirely unrelated songs, giving the viewer a whole new thing to talk about. (Her entire Music period, when she was performing electronica music, saw her dressing as a cowgirl for no reason but kicky fun.) Swift, having set her public image with four albums’ worth of earnest clips, has earned the opportunity to do the same sort of toggling through characters onscreen. In fact, getting good at crafting compelling, fun music videos people would want to watch was the last thing she needed to do in order to become 2015’s all-around-perfect pop star. Just about the only thing in the outlandish sci-fi “Bad Blood” video universe that’s true in ours is that Swift is a force to be reckoned with. After training and bettering herself, she’s coming to dominate her rivals. 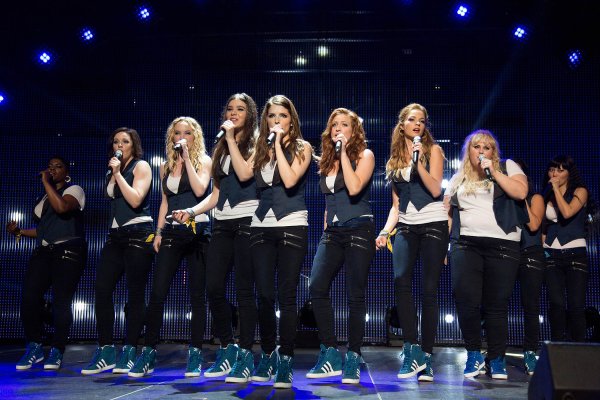 17 Things You Probably Didn't Know About the Music in Pitch Perfect 2
Next Up: Editor's Pick