A Saudi border guard watches as he stands in a boat off the coast of the Red Sea on Saudi Arabia's maritime border with Yemen, near Jizan April 8, 2015.
Faisal Nasser—Reuters
By Kay Armin Serjoie / Tehran

An Iranian aid ship has entered the Gulf of Aden in a direct challenge to Saudi Arabia and the United State’s blockade of Yemeni ports, Iranian media has reported.

The Iran Shahed is carrying 2,500 tons of aid and is bound for the port of Hodeidah, which is controlled by the Shiite Houthi rebels. The ship was chartered by the Red Crescent Society of Iran and its passengers include a medical team, journalists and anti-war activists. Saudi Arabia has vowed that it will not allow Iranian ships to dock in any of Yemen’s ports to prevent the supply of arms to the Houthis.

In April, a convoy of Iranian ships that Iran claimed contained aid turned back from Yemen after their route was blocked by the American aircraft carrier USS Theodore Roosevelt. A few days later an Iranian aid plane was forced to turn back when Saudi jets bombed the airport in the Yemeni capital of Sana’a’s airport to prevent it from landing.

Saudi Arabia is worried about the increasing influence of Iran in the Middle East. Iran wields great influence in Lebanon, Syria, Iraq with the help of proxies such as Hizballah.

This time Iran has asked its navy, which has a small convoy on an anti-piracy mission in the Gulf of Aden, to provide special protection for the ship. The Iranian military has warned it will retaliate if the Iran Shahed is prevented from reaching Yemen. “Both the new rulers of Saudi Arabia and the United States should pay attention, if they keep on hindering the Islamic Republic of Iran from sending aid, an inferno will arise that they will most certainly not be able to extinguish,” Masoud Jazayeri, a General in the Iranian Revolutionary Guards, told Iranian TV last week. “I am distinctly stating that the patience of Iran has limits, if the Iranian aid ship is prevented from reaching Yemen then they [Saudi Arabians/United States] should expect actions from us.”

The ship is due to meet the Iranian convoy and then head into the Red Sea before arriving in Hoedeidah on May 21. However the ship’s passengers do not seem worried about future conflict. “During the day we all have something to do, in my case send in reports when I can with the unreliable internet we’ve got, but in the evenings we all gather up and play games and have fun. The crew says they can hear our laughter throughout the ship,” said Mehdi Bakhtiari, a journalist with Iran’s Fars News Agency.

Bakhtiari, who was speaking via satellite phone from the deck of the ship, said their vessel was approached by a ship on Sunday morning, which requested information by radio. “It kept a 6-mile distance and asked our port of origin and destination and followed us for some time. But when our ship’s captain asked it to identify itself it just said it is part of the coalition and didn’t say whether it was the anti-piracy coalition or the Saudi-led coalition.”

Bakhtiari said he had seen no arms on board the ship “We asked to be shown the cargo as soon as we got onboard. We went over all of the containers, we even took pictures and film, and it’s just rice, grain, bottled water and antibiotics, there are no weapons on board this ship.” 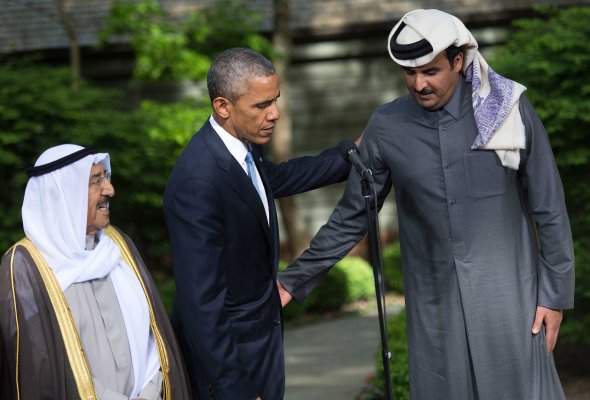 These 5 Facts Explain the Troubled U.S.-Arab Relationship
Next Up: Editor's Pick