Mad Men’s much-anticipated closing song wasn’t a gritty track by an artist who served as an icon for the sex, drugs and rock-and-roll generation — but a jingle. It might not have had the adrenaline-pumping impact of The Sopranos’ “Don’t Stop Believin’,” but it made perfect sense for the end of a story about Don Draper — a guy to whom it was once said, “If you had to choose a place to die, it would be in the middle of a pitch.”

“I’d Like to Buy the World a Coke” was, of course, a real ad from 1971 for Coca-Cola, Don’s white whale. The song was actually the brainchild of a man named Bill Backer, a creative director at McCann-Erickson, the firm that employed Don for a brief minute. It was such a success that it was released as a single with lyrics disassociated from Coca-Cola (“I’d Like to Teach the World to Sing”); subsequently, it’s been revived as the company’s jingle several times.

The song works not only because of its overlap with the particulars of Don’s career, but also because of its placement right after his seeming revelation while meditating in paradise. Has he really bought into the vision this retreat is selling? (Don’t forget, it is a business — Don thinks it’s a good thing when the receptionist takes his money after he arrives. Also note that the receptionist wore her hair in the same ribboned braid as a woman in the Coke ad.) It certainly seems possible — after all, that man’s weepy confession in group therapy sounded uncannily like a Don Draper pitch, complete with a domestic setting and a sentimental message. Don responds to that “pitch” like nothing else we’ve seen from him lately.

Advertising may be a lie, but the best lies have an element of truth. It’s always been hard to tell how much Don actually wanted that American dream he’s been selling to people — full of soap, lipstick, beer and cars. But it’s equally hard to imagine him sitting in a lotus pose just for the sake of going along with the crowd.

“It’s the real thing,” the singers declare in the jingle. But what exactly is the real thing? Don’s newfound inner peace? Or the idea that everything is a product that can be sold — including mental health? Is the meaning of life spirituality, or is it capitalism? That might be Mad Men’s ultimate cliff-hanger. 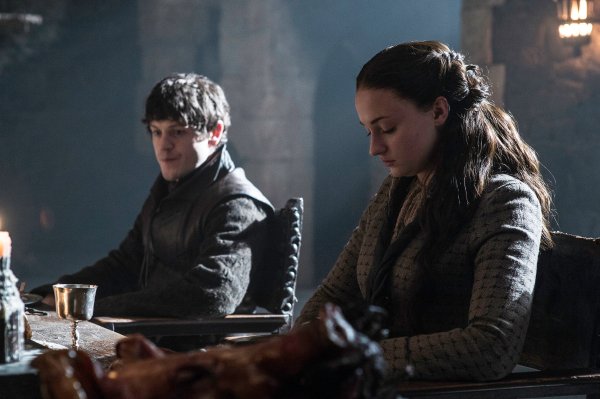 Game of Thrones Watch: The Game of Faces
Next Up: Editor's Pick