Portraits of President Bashar Assad seen in Damascus during the previous presidential poll in May 2007.
Hassan Ammar—AFP/Getty Images
By Aryn Baker

For the past forty years, voting in Syria has been a pretty straightforward process. In 2007, the most recent presidential poll, the ballot asked one simple question: Should Bashar Assad stay in power for another seven-year term? Voters could check a green circle marked yes, or a red circle marked no. In at least one polling station in Damascus (though anecdotal evidence points to a wider distribution) election officials even made the act of checking optional. Instead, they offered a stack of forms pre-marked in Assad’s favor. Anyone who wanted to vote against him simply had to ask for an unmarked ballot—in front of an array of police officers and intelligence agents. “Not once in the whole day did I see someone vote against Assad,” says Siraj, a 28-year-old Syrian military defector now living in Beirut, Lebanon, who was helping his father run the local polling site that day by passing out ballot papers. “If you asked for an unmarked ballot, all eyes would be on you.”

In 2007, Assad won the referendum with 97.6 percent of the vote. With his second term drawing to a close on July 17, a new election is likely to be called in the coming weeks, though this time around it won’t be a simple yes or no vote. Electoral reforms, voted in by parliament two years ago, now allow multiple candidates to run for president for the first since Assad’s father took power 44 years ago. Few believe that it will make any difference at all. “I’ve seen how voting works in Syria,” Siraj tells TIME, asking to go by one name to protect family still in Damascus. “Assad will win no matter how many names are on the ballot.”

Not only are the upcoming elections likely to be meaningless in a country where three years of war have driven nearly half the population from their homes and taken an estimated 145,000 lives, they also threaten to undermine any chance of a political negotiation that might lead to peace. A presidential campaign with Assad in the running directly contravenes a UN-backed peace process based on the establishment of a transitional government leading to free and fair elections. “I very much doubt that a presidential election and another seven-year term for President Bashar Assad will put an end to the unbearable suffering of the Syrian people, stop the destruction of the country and re-establish harmony and mutual confidence in the region,” U.N. peace mediator Lakhdar Brahimi told the U.N. General Assembly on March 14.

Assad has yet to formally announce his candidacy, coyly stating in various media appearances that it is up to the Syrian people to nominate him. But in government-controlled areas, election preparations are in full swing. In Homs city, rubble-strewn neighborhoods are being cleaned and plastered with posters of the President and banners pleading for him to run. In Damascus shopkeepers have painted their rolling shutters with the colors of the regime’s flag while car processions waving flags and blaring music glorifying Assad make the rounds. Posters proclaiming that “Eyelids will not sleep until you elect the ophthalmologist,” in reference to Assad’s pre-presidential career have sprouted in affluent areas (the phrase rhymes in Arabic). Yet for all the election fanfare, and the fact that Parliament has cleared the way for competition, not a single opposing candidate has emerged. The risks are simply too high. Twenty-seven-year-old Damascus resident Hind doesn’t expect to see any real candidates put their name forward. Anyone who runs against Assad, she says, via Skype, will be doing it just for appearances’ sake, “to keep up the spectacle and make-believe.”

Even if a serious contender were to emerge, stringent requirements make it all but impossible to enter the race. Candidates must win the support of 35 members of the pro-Assad Parliament, and they must have lived in Syria for the past 10 years, a stipulation that automatically knocks out even officially tolerated opposition members, all of whom have spent time in exile at one point or another over the past decade. Both parents must also be Syrian, and foreign spouses are not permitted. “I have not personally seen any candidates [come out], and I don’t think we will see any because the conditions are literally incapacitating,” says Damascus resident Mazen, 24, reached by Skype. Neither Hind nor Mazen would allow their full names to be used, for fear of a backlash by Syrian security forces.

To opposition members leading the anti-Assad revolt from exile, the proposed elections, with all their hubris and constraints, are a charade. “The only unknown about this election is whether Bashar will get 97 or 98 percent of the vote,” says Oubai Shahbandar, a senior adviser to the Syrian opposition, based in Washington D.C. What is clear, warns Shahbandar, is that if Assad does go through with his putative election, “he will be signaling the regime’s unwillingness to go back to the negotiating table, and slamming the door shut on any chance of peaceful resolution for Syria.”

—with reporting by Hania Mourtada / Beirut 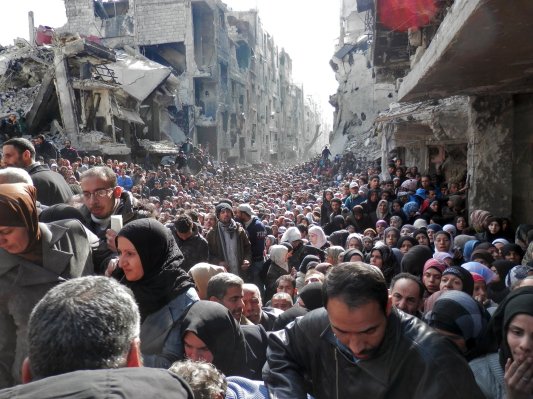