With every iconic guitarist comes an iconic guitar. Willie Nelson has Trigger, his tattered acoustic Martin. Eric Clapton played a black Stratocaster, Blackie, for much of his prime until mechanical issues forced him to retire it. But from blues to country to rock, the most famous guitar might be B.B. King’s Lucille.

Unlike other guitarists, King didn’t bestow the name Lucille upon a single guitar. Instead, he gave it to all his guitars to remember a particularly memorable show early in his career. In 1949, King had just signed to RPM Records, where he was recording as a session musician and touring throughout the United States. At a gig in Twist, Arkansas, two men began to brawl over a woman named Lucille, knocking over a kerosene stove—it was the dead of winter—and igniting a fire at the venue.

Despite a blaze that “looked like a river fire,” King ran in to save the guitar as the buildings walls began to crumble. When he found out the next day that the two fighters had died, King vowed to name future guitars Lucille as a reminder—against fighting over women and doing risky things, like running into a building to save a guitar.

That night King was playing a cheap Gibson L-30, but the guitar most frequently associated with the name “Lucille” is a Gibson ES-355. With its fat, curvy, semi-hollow body, mother-of-pearl fretboard markers, and dual pickups, the ES-355 informed King’s signature aesthetic and sound as much as his voice. In the ’80s, King worked with the company to make his own “Lucille” model of the ES-355, which featured a couple of schematic modifications and the guitar’s name emblazoned on the head.

Lucille influenced much of King’s career, from the 1968 album and song he named after the guitar to a 1997 visit to the Vatican when he gave Pope John Paul II one of the instruments as a gift. 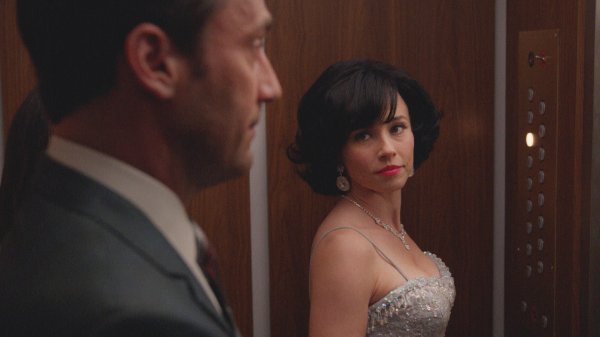 Linda Cardellini on Mad Men's Secrets and Sex Scenes
Next Up: Editor's Pick