Mitt Romney Once Again Set to Lose, This Time in Boxing

Mitt Romney is going to lose. But unlike his 2008 and 2012 presidential bids, he knows it ahead of time.

Romney, who has never previously boxed, is scheduled to face world heavyweight champ Evander Holyfield during a charity event Friday evening in Utah. The former Republican governor of Massachusetts and 2012 GOP presidential nominee enters the ring as the undeniable underdog. Romney’s optimistic entrance music? “I Will Survive.”

“I expect to be beaten but unbowed,” Romney told the New York Times magazine in an interview.

Romney, the stiff patrician who is more comfortable captaining his boat around New Hampshire’s Lake Winnipesaukee than throwing haymakers, is using the stunt to raise cash for Charity Vision, which has ties to the Romney clan. The former governor’s wife, Ann, is on the organization’s board of directors; his son Josh is the group’s president.

Promoters estimate $1 million will go to the group, which helps treat blindness and eye problems in 25 countries. That sum would pay for about 40,000 eye surgeries from El Salvador to Indonesia.

But trading in cuff links for boxing gloves is a shift for Romney, who traded verbal jabs with President Obama but little more. Now, he’s facing down a four-time world champion and Olympic bronze medalist.

It is unlikely that Holyfield will be cowed by Romney’s tenure running 2002’s Winter Olympics in Salt Lake City.

“I will be doing a bit of dancing and dodging Friday night,” Romney told the magazine, comparing it to taking political hits during two runs for president.

A 30-second negative commercial, however, is unlikely to have anything close to the pain Holyfield could inflict on Romney’s matinee-idol jawline.

Romney advisers are hoping the jabs will be for show and in good humor. The fight is supposed to go three rounds, but the play-acting in the ring could be cut short once the novelty wears off. After all, one Romney friend says, the governor is doing this more to help his family continue its charity work than to put himself back in the spotlight.

While absurd, Romney is hardly the first political figure to stray from staid formality to help his own cause. Richard Nixon appeared on NBC’s “Laugh-In” variety show as a candidate in 1968, and presidential hopefuls are frequent election year cameos on “Saturday Night Live.” Former Republican Majority Leader Tom DeLay shook his rump on “Dancing With the Stars,” only to withdraw with a fractured foot.

And former Alaska Gov. Sarah Palin, the GOP’s 2008 vice presidential nominee, signed with “Survivor” producer Mark Burnett for her own reality show, “Sarah Palin’s Alaska.” She has since been branded “the first lady of the outdoors” on the Sportsman Channel’s “Amazing America.”

Still, no politician has yet to take a right cross to the face from a boxing champ. Romney’s allies are betting Holyfield goes easy, and that the two-time presidential hopeful doesn’t become the first politician to know the literal meaning of being on-the-ropes. 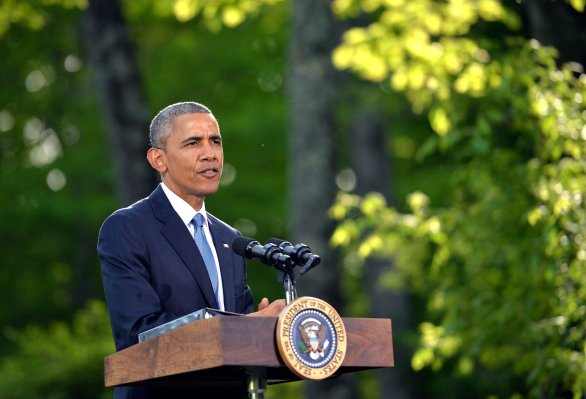