Nepalese army men search for the missing U.S. Marine helicopter in the earthquake affected Dolakha District of Nepal on May 14, 2015.
Niranjan Shrestha—AP
By Deepak Adhikari / Kathmandu and Nikhil Kumar

The wreckage of a U.S. marine chopper on an aid mission in Nepal that was reported missing hours after the Himalayan nation was hit by a 7.3 magnitude temblor on Tuesday has been found near the country’s border with China, the U.S. military’s Pacific Command said on Friday.

The wreckage of the UH-1Y Huey helicopter, which was carrying six U.S. marines and two Nepalese soldiers when it was declared missing, was found just before 2 P.M. local time in an area approximately 8 miles north of Charikot, in Nepal’s northeastern Dolakha district. “An assessment of the site is ongoing and a thorough investigation will be conducted,” U.S. Pacific Command spokesman Major David Eastburn said in an emailed statement.

Earlier, Laxmi Prasad Dhakal, a spokesman for Nepal’s home ministry told TIME that the chopper had been found in Dolakha’s Kalinchok village. “It crashed in a slope near Kalinchok [Hindu] temple,” Dhakal said.

Reuters, meanwhile, quoted Iswori Prasad Paudyal, the top civil servant in Nepal’s defense ministry, as saying that three bodies had been found in the wreckage of the chopper. “The search for others is continuing. As the helicopter has broken into pieces and totally crashed there is no chance of any survivors,” he told the news agency.

The helicopter was on a mission to deliver aid to earthquake victims around 85 miles east of Nepal’s capital Kathmandu when it was declared missing. The U.S. marines were part of a joint task force set up in the aftermath of the 7.8-magnitude earthquake on April 25 that killed over 8,000 people.

The quake, which was centered in a mountainous region to the northwest of Kathmandu, was followed by a series of smaller aftershocks — and then on May 12, by violent tremors triggered by a large 7.3 magnitude rupture with an epicenter to the capital’s northeast, between Kathmandu and Mount Everest.

Dolakaha was among the districts hardest hit by the second quake on Tuesday, with the tremors knocking down buildings and killing more than 100 people in the already devastated South Asian nation.

As news of the missing U.S. chopper emerged shortly after Tuesday’s quake, American and Nepalese air and ground forces fanned out across the region in a massive search effort. Indian forces also assisted in the search, according U.S. Pacific Command. 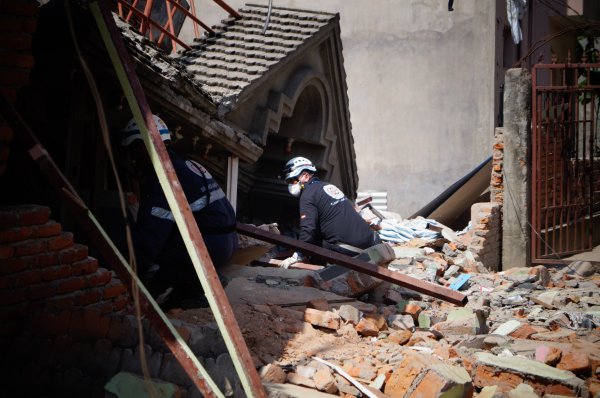