Jeb Bush Reverses Himself: 'I Would Not Have Gone Into Iraq'

Former Florida Gov. Jeb Bush sought to turn the page on a week of terrible press coverage Thursday, telling a group of Arizona voters that knowing what is known now, he would not have launched the 2003 Iraq War.

“Knowing what we know now I would not have engaged—I would not have gone into Iraq,” Bush said, in reference to his greatest liability—the unpopular war launched by his brother, former President George W. Bush.

It was the latest turn in a tumultuous week that began with an interview with Fox News host Megyn Kelly on Saturday in which he said he would have supported going to war, even knowing that the Iraqi government did not possess weapons of mass destruction. “My mind kind of calculated it differently,” Bush later explained, saying he misheard Kelly’s question.

On Wednesday, Bush dodged the same question Kelly asked him days earlier, saying he wouldn’t answer “hypotheticals” and that the question did a “disservice” to the memories of the 4,491 American war dead.

But that didn’t put the questions to rest, Bush’s Republican opponents lined up to criticize him for the comments, while Democrats gleefully used the opportunity to tie him to his brother.

“If we knew then what we know now and I were the President of the United States, I wouldn’t have gone to war,” New Jersey Gov. Chris Christie told CNN Tuesday. Sen. Rand Paul told the Associated Press that Bush’s comments represent “a real problem if he can’t articulate what he would have done differently.”

“Knowing what we know now, of course we wouldn’t go into Iraq,” Sen. Ted Cruz told The Hill.

Bush’s reversal may put the controversy to rest temporarily, but it only further highlights the challenges the entire Republican field with respect to talking about the conflict.

In a gaggle with reporters after his remarks, Bush maintained that the war was “worth it” for the families of the war dead.

Bush said that after the rise of the Islamic State of Iraq and Greater Syria (ISIS), the U.S. must “re-engage” in Iraq beyond what President Obama has done.

“I think we need to re-engage and do it in a more forceful way,” Bush said. “The president is very reluctant for whatever reason to make a clear commitment that we should have kept 5,000, 10,000 troops there.”

He acknowledged that there has been success countering ISIS since Obama ordered airstrikes and deployed trainers to assist Iraqi forces last year, but said more has to be done. “We can’t do it by drones. We have to be there to train the military and to do the things that are being done right now. And I believe that if we had stayed the course in that, if we do, we will be successful.” 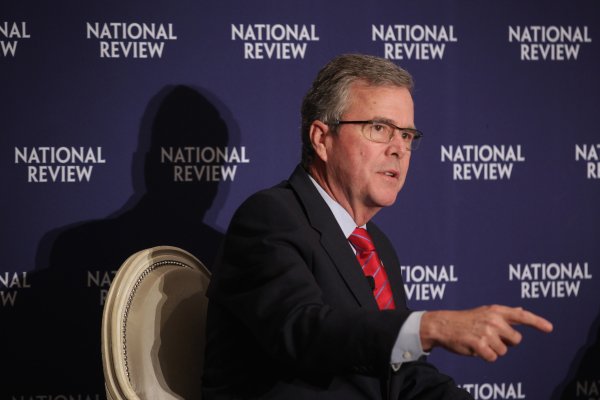