Amtrak Train That Derailed Sped Up Before Crash

An eighth and final fatality in an Amtrak train derailment earlier this week was confirmed Thursday as officials provided more information about the train’s speed ahead of the accident and pledged to install safety technologies to prevent future ones.

Robert Sumwalt, a member of the National Transportation Safety Board who is leading the investigation into Tuesday night’s derailment, gave reporters a more clear tick-tock of the train’s acceleration as speed was still considered a potentially major factor. Sixty-five seconds before the crash, Sumwalt said, an analysis of the train’s forward-looking visual recorder clocked the train at 70 miles per hour; 16 seconds before the crash, the train was going 100 mph.

Amtrak Northeast Regional 188 derailed northeast of Philadelphia Tuesday night en route to New York City from Washington, D.C. Investigators from the NTSB say the train reached 106 m.p.h. moments before the accident along an S-curve with a speed limit of 50 m.p.h. (On Thursday, the Associated Press reported that a lawyer for Amtrak dispatcher Bruce Phillips, who was injured in the crash, said his client filed what appears to be the first lawsuit to result from the derailment, with more than $150,000 sought in damages.)

Philadelphia Fire Commissioner Derrick Sawyer announced Thursday afternoon that an eighth body had been pulled from the train wreckage just hours earlier, bringing the total number of deaths to eight. Mayor Michael Nutter said that officials now believe that all 243 passengers have been accounted for.

Amtrak CEO Joe Boardman also reiterated the company’s commitment to install “positive train control” along the Northeast Corridor, a technology designed to slow and even stop speeding trains. Later, in an interview that aired on CNN, Sumwalt said: “We do believe that positive train control could have prevented this accident.”

The investigation has now focused on the train’s engineer, 32-year-old Brandon Bostian of Queens, N.Y. Bostian received multiple head and leg injuries in the accident, and Mayor Nutter confirmed that he was interviewed by the Philadelphia Police Department while hospitalized. “It was a pretty short interview in which he apparently indicated that he did not want to be interviewed,” Mayor Nutter said.

On Thursday, the NTSB tweeted that Bostian had agreed to an interview by its investigators.

So far, Bostian has reportedly given a blood sample to determine whether there were any illegal substances in his system and has also turned over his cell phone. Robert Goggin, Bostian’s lawyer, says his client met with police for five hours. Neither the police nor Bostian have commented on that meeting, but Goggin says the engineer has no memory of the crash. Goggin has also told CNN that his client had not been on his phone during the accident and says the engineer has had no significant accidents in his time with Amtrak.

All eight victims have been identified: Jim Gaines, 48, a video software architect with the Associated Press; Justin Zemser, 20, a U.S. Naval Academy midshipman; Rachel Jacobs, CEO of education technology company ApprenNet; Abid Gilani, a senior vice president at Wells Fargo; Derrick Griffith, a dean at Medgar Evers Colege; and Bob Gildersleeve, 45, a vice president at Ecolab, a hygiene and energy technologies company; Giuseppe Piras, who Italian media said worked in the olive oil business; and Laura Finamore, 47, who was reported to have been going back to New York following a memorial service for the mother of a friend.

Many are now questioning the lack of safety controls to slow speeding trains along the Northeast Corridor. According to Amtrak, full installation of positive track control was scheduled to be completed along the heavily trafficked corridor by December 2015, according to the January/February 2015 issue of Amtrak Inc., a company publication. NTSB’s Sumwalt has said that PTC could have prevented Tuesday’s accident.

“Based on what we know right now, we feel that had such a system been installed in this section of track, this accident would not have occurred,” Sumwalt said. He has also told CNN that a “key question” is to figure out why it hadn’t been used, adding: “Why was it in other areas … on Amtrak’s Northeast Corridor, but why was it not here?”

The likely answer is cost. Most estimates place the price tag at $10 billion to install the technology nationwide. But finding enough federal money to install PTC everywhere will be difficult. Just hours after the accident, a House subcommittee voted down a bill that would’ve increased funding for the beleaguered train service. 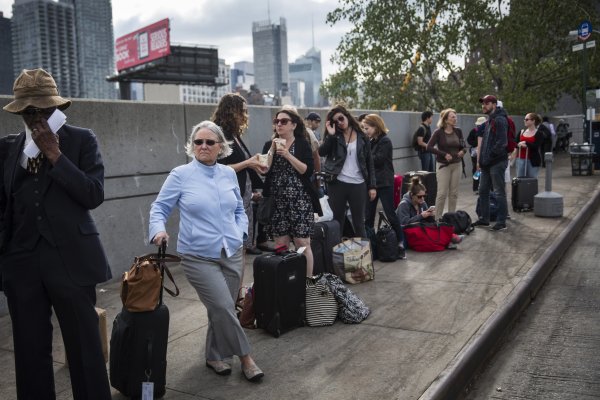 How the Amtrak Crash Is Hurting the U.S. Economy
Next Up: Editor's Pick