How the Church Can Get Millennials Back

This past week, the image of the United States as a Christian nation was contested by a new Pew study that showed that the number of Americans who call themselves Christian has dropped significantly. While the trend occurs across all age groups, it’s most notable among millennials.

Being Christian is no longer a cultural norm, but a free decision. So what can the Church do to attract young people back to the pews? To me the answer is quite simple: Lead with Jesus.

In December 2013, Elizabeth Tenety wrote an article in the Washington Post titled “Like Pope Francis? You’ll love Jesus.” Tenety notes that what we love about Pope Francis is what has continue to amaze us about Jesus of Nazareth. The Jesus that Christians often present today is either too colored by our own political agendas or incredibly stale. But the troublemaker who founded the faith was nothing short of a radical.

Brandon Ambrosino puts it this way:

A Christian faith without Jesus and his radical mission at the center is superficial. Too often those entrusted with passing down the faith of Jesus Christ have instead reduced it to what Pope Francis calls “a disjointed multitude of doctrines to be imposed insistently.” This version isn’t a meaningful faith that provides life-long meaning for its people and that stands the test of time. It’s a faith without a future.

Make no mistake: Leading with doctrine instead of the person of Jesus simply will not work among today’s skeptical young Americans who are constantly inundated with the false god of consumerism, empty political rhetoric, dictatorships of relativism, a historical fundamentalism, systems of ethics lacking goodness, and intellectual discourse high on privilege and short on wisdom.

Since the end of Jesus’s life, his followers have been dedicated to spreading his story throughout the world. In the United States, there has been a long tradition of Christians leaving their home and going to serve on missions to spread the Gospel to countries around the globe.

But if the Pew report is correct, it seems that Americans don’t have far to travel to find missionary territory today. It’s in our backyard. It’s on Wall Street, where the law of God has been replaced by the law of the marketplace. It’s in Washington, where our lawmakers fail again and again to make our nation more just and less cold. And it’s in our communities, our families, and even our own hearts, which have become sterile and cold amidst this globalization of indifference.

Pope Francis has some advice for those engaging in this work: “The church sometimes has locked itself up in small things, in small-minded rules. The most important thing is the first proclamation: Jesus Christ has saved you. … In pastoral ministry we must accompany people, and we must heal their wounds.”

In the end, it’s pretty clear: If Christianity is to have a renaissance in the United States, it must get back the source and the summit of the faith: Jesus of Nazareth. 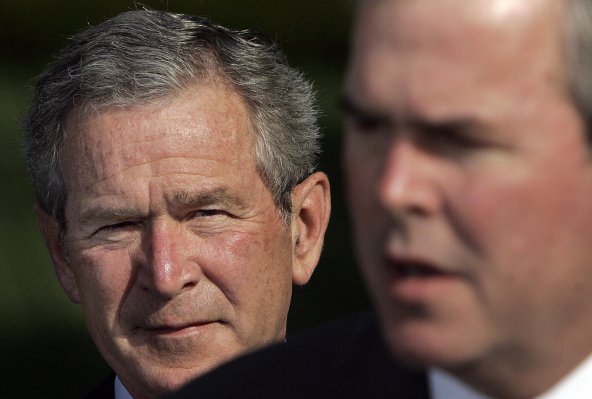 Oh, Brother: Jeb Bush and the Problem With Siblings
Next Up: Editor's Pick