President Ronald Reagan in Washington in 1983.
Bachrach—Getty Images
Ideas
By H.W. Brands
H.W. Brands teaches history at the University of Texas at Austin. His latest book is Reagan: The Life.

For 30 years Ronald Reagan has been a hero to Republicans and conservatives, his presidency regarded as the crucial moment when America began to turn back from the misguided liberalism of the New Deal to the truths of individual liberty and personal opportunity on which this country had rested from its founding. Yet as much as those on the right have revered Reagan, they have been unable to recapture his magic and repeat his success. The Reagan Revolution has had no second act.

The reason for this is that Reagan’s accomplishment has been widely misunderstood. Reagan is remembered for his compelling vision for America: a vision of self-reliance, limited government, stout defense, and world leadership toward freedom. And he is remembered for his ability to communicate this vision, better than anyone else of his generation or after. In a long political career, Reagan gave hundreds of speeches, but all were riffs on the single theme of expanding liberty. There is nothing of substance in any of Reagan’s speeches that doesn’t resonate today with nearly everyone right of center, from mainstream conservatives to Tea Party activists.

Yet Reagan was more than a speechmaker, more than a visionary. He was also a brilliantly successful politician. Reagan had no military experience—beyond performing in films for the army during World War II—but he instinctively understood the difference between strategy and tactics. His strategic goal was to shrink government at home and defeat communism abroad. (On the latter he memorably told Richard Allen, who became his national security adviser: “My theory of the Cold War is: We win and they lose.”) But Reagan recognized that progress came in stages, and that a step forward was a step in the right direction, even if it didn’t achieve the goal all at once. “If Reagan told me once he told me fifteen thousand times,” James Baker, Reagan’s chief of staff and later his Treasury secretary, recalled in an interview: “‘I’d rather get 80 percent of what I want than go over the cliff with my flags flying.’”

In case after case, Reagan demonstrated the flexibility necessary to advance his conservative agenda. He called for cutting taxes, and he was astonishingly successful in doing so, reducing by half the top rate on personal income. But he was willing to accept slight tax increases when necessary to consolidate gains already made and to achieve other conservative goals, such as streamlining the tax code and putting Social Security on a sounder footing. His willingness to accept less than his maximum program similarly made possible broad deregulation of business and a landmark immigration reform act.

Reagan is often cited as an enemy of government. The most frequently quoted line from his first inaugural address has him saying, “Government is not the solution to our problem; government is the problem.” But what is almost always omitted is the prefatory clause: “In this present crisis…” Reagan was not an enemy of government, and he did not think government was the enemy of the American people. He believed government should be smaller than it had become by the 1980s, and that it should be more efficient, but he didn’t believe it should be dismantled. As Greg Leo, who served in the Reagan administration told me, “We were not anarchists; we were conservatives.”

Reagan’s tactical flexibility appeared in other arenas. He was famous for declaring the Soviet Union an “evil empire.” He had no doubt that communism was the most pernicious of modern creeds, and that the Kremlin was, as he put it in the same speech, “the focus of evil in the modern world.” Reagan directed the rebuilding of American defenses to combat communism and bolster freedom. Yet even as he built up arms, he sought ways to negotiate them down. Indeed, the purpose of the arms buildup was to make arms reductions possible—to convince the Russians they couldn’t beat the United States in an arms race.

Reagan repeatedly sought to engage Soviet leaders in negotiations, to no initial avail. “They kept dying on me,” he said of the Moscow gerontocracy. But the emergence of Mikhail Gorbachev gave Reagan someone to negotiate with, and in the culmination of an unprecedented series of summits, Reagan and Gorbachev eliminated one whole class of nuclear weapons and laid the basis for dramatic additional cuts in the superpower arsenals. Visiting Moscow during his last year in office, Reagan was asked whether he still considered the Soviet Union an evil empire. “No,” he said simply. Later prompted to explain, he acknowledged that even communists could change for the better. “There is quite a difference today in the leadership and in the relationship between our two countries.”

Reagan brought another crucial attribute to conservatism. Righteous indignation, at times amounting to anger, has often characterized the conservative movement. From Barry Goldwater to the Tea Party, many conservatives have seemed to like feeling beset and aggrieved. Reagan could get righteously angry, as when the Soviets shot down a Korean airliner in 1983. “Words can scarcely express our revulsion at this horrifying act of violence,” he declared.

But anger wasn’t Reagan’s natural mode. He was an optimist at heart, and in every speech he conveyed his belief that America’s best days were ahead. Goldwater frowned and warned; Reagan smiled and invited. Reagan’s philosophy differed hardly at all from Goldwater’s, but Reagan’s vote-getting power surpassed anything Goldwater could muster. Reagan genuinely believed America was a “shining city on a hill,” as he said again and again, and he made Americans believe it, too.

Reagan refused to demonize his foes. Instead he charmed them, with a few exceptions, including Tip O’Neill, the Democratic Speaker of the House and the embodiment of the liberalism Reagan sought to reverse. Reagan conspired in the impression that he and O’Neill shared a bond that transcended political differences, but it was an act. “Although photographs taken after their meetings suggested a sort of underlying Irish camaraderie between the two men, the reality was that they were hammer and anvil,” said Donald Regan, of Irish descent himself, who served as Reagan’s Treasury secretary and then chief of staff. After one meeting with O’Neill, Reagan told Regan, “I don’t know what the hell’s the matter with the man. I just can’t seem to reach him.”

Reagan reached most other people he encountered. He didn’t point fingers; he told jokes. He understood, from years on the lecture circuit, the disarming value of humor: that getting people to laugh with you is halfway to getting them to agree with you. He used humor more effectively than any president since Abraham Lincoln. Reagan was not an especially warm person, but he appeared to be. Many people disliked his policies, but almost no one disliked him. 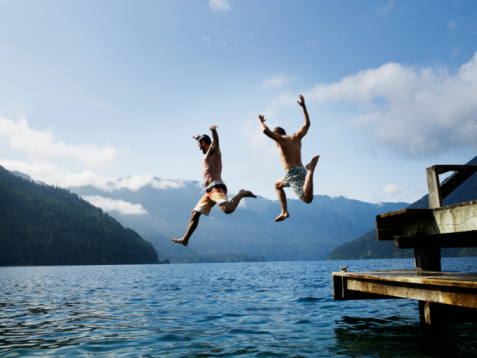 5 Secrets to Dealing With Regret, According to Research
Next Up: Editor's Pick