No Victor in Sight as Coup Unfolds in Burundi

Protesters, who are against President Pierre Nkurunziza's decision to run for a third term, gesture in front of a burning barricade in Bujumbura, Burundi on May 14, 2015.
Goran Tomasevic—Reuters
By Aryn Baker

At what point does an attempted coup become a successful coup? Residents of the East African nation of Burundi woke up to that question on Thursday morning as fighting intensified in the streets of the capital, Bujumbura. Local radio stations, usually the most reliable source of information, offered no clarity for good reason: both independent and state-owned broadcasters were under attack Thursday morning as troops loyal to President Pierre Nkurunziza battled supporters of former intelligence chief Godefroid Niyombare for control of the airways and the opportunity to declare victory.

On Wednesday morning Niyombare announced the coup after the President flew to a meeting in Tanzania. The streets of the capital erupted in celebration as residents, who had been protesting the President’s decision to run for a third, and potentially illegal, term in office saw a chance for victory.

A protestor holds up a dead owl attached to a stick, intended to denigrate the ruling party whose emblem is an eagle, during a protest in Buterere neighbourhood of Bujumbura, Burundi on May 12, 2015.
Goran Tomasevic—Reuters

They sang, cheered, and shook the hands of pro-coup soldiers. One protestor lofted a dead owl in the air to mock the death of the President’s party, whose emblem is an eagle (owls being easier to come by than eagles in Burundi, apparently). But the celebration was short lived. Government officials announced Wednesday evening that the coup had been foiled, “and that these people, who read the coup announcement on the radio, are being hunted by defense and security forces so that they can be brought to justice.”

Niyombare responded by shutting down the country’s sole airport and closing all borders in the landlocked nation. Nkurunziza was locked out of his country and reduced to calling for calm from Tanzania via Twitter. “The situation is under control, there is no coup in Burundi,” tweeted the official presidential account in French. Overnight, loyalist forces in the military appeared to take the upper hand. Presidential supporter General Prime Niyongabo, the army chief of staff, announced “The attempted coup… has been stopped,” according to the BBC.

The coup attempt is the culmination of violent protests that have rocked the impoverished nation for more than two weeks since the ruling CNDD-FDD party announced that it had selected President Pierre Nkurunziza as its candidate for next month’s elections. The president has already served two five-year terms, the maximum allowed by the constitution, but his supporters claim that since he was not elected for his first term, but appointed by parliament, the first term doesn’t count. The country’s constitutional court supported the interpretation, but the one dissenting judge immediately fled the country for fear that his life was at risk, raising questions about the court’s impartiality. Opposition politicians fear that should he run again, his party will be able to rig the election in his favor. A born-again Christian that rarely travels without his personal choir, the President also believes that he was personally appointed by God to lead Burundi, according to his presidential spokesman. “Mr. Nkurunziza indeed believes he is president by divine will, and he therefore organizes his life and government around these values,” presidential spokesman Willy Nyamitwe told AFP in April.

At least 22 have been killed in protests that were often divided along ethnic lines. Scores have been injured, and some 50,000 Burundians have fled for neighboring countries, fearful that the 13-year-old civil war that ended in 2006 might reignite.

In announcing his coup, Niyombare, a former presidential ally who was dismissed in February, said that he had no intention of taking power himself, only that he wanted to work for “the restoration of national unity and the resumption of the electoral process in a peaceful and fair environment,” according to AFP.

Burundi may be small, with a population of 10.1 million, but heightened tensions in one of the most volatile areas of east Africa are cause for international concern. The U.S. Department of State urged Burundians to “lay down arms, end the violence and show restraint,” while the European Union and the United Nations appealed for calm. Neighbors Rwanda and the Democratic Republic of Congo are also watching the events closely, though for different reasons. Both countries have upcoming presidential elections, and both have incumbents who are reaching the end of their constitutional term limits. But both Rwanda’s Paul Kagame and the DRC’s Joseph Kabila have hinted that they might seek a way to stay on. It’s not just Burundians who want to know whether or not the coup was successful; Kabila and Kagame are likely to be taking note as well. 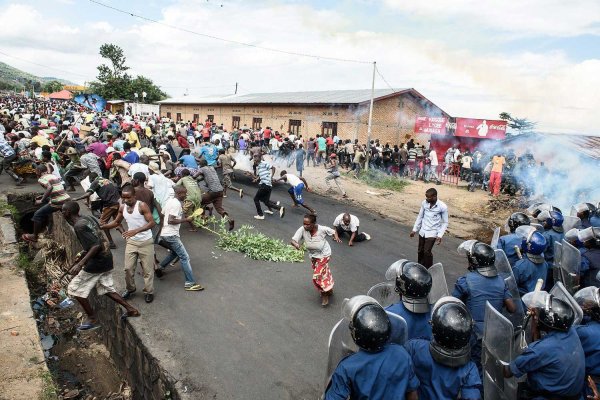 Protests in Burundi Precede Celebrations After Coup Attempt
Next Up: Editor's Pick