All In is Lean In for Dads

Men should lean in just as much as women—they should just do it in a different direction.

That’s the gist of Josh Levs’ All In, a manifesto of work and life for men that aims to be for working fathers what Sheryl Sandberg’s Lean In was to working mothers: a cogent analysis of the systemic problems in work culture that make it so difficult to be a parent. Levs says he consulted with Sandberg while he was writing the book.

Josh Levs is a CNN reporter who made headlines in 2013 when he filed a charge with the Equal Employment Opportunity Commission against Time Warner because he said their paid leave policy discriminated against biological dads. At the time, Time Warner offered 10 weeks of paid leave to biological mothers, and to parents of both genders who adopted or had a child through surrogacy, but biological fathers only got two weeks. Levs challenged this rule and won, and went on to become an advocate for better workplace policies for dads as well as moms.

Levs’ central argument is that American culture—especially American workplace culture—doesn’t allow parents of either gender to spend enough time with their children. There’s been a lot of discussion about how tricky that problem is for women, but few have dug deep into what it means for men. “There’s this basic mentality about what men and women are that has held back our policies,” he says. “Our structure is based on the assumption the woman will stay home and men will work, so why would you need paid maternity leave? The women will stay home! Why would you need paternity leave? They’ll work!”

Clearly, that assumptions aren’t true anymore, but Levs argues that workplace policies have not kept up with the changing times. “Our policies didn’t grow up, our policies are stuck in the past,” he says.

Changing American workplace policies isn’t just a question of accommodating parents, its a question of looking out for children, Levs argues. He says that paid leave shouldn’t be considered a luxury—he says it’s no different from “absolute basics” like public schools or medical care for kids. “Another absolute basic is making sure what when a child leaves the womb, its parents, or one of its parents at least, hopefully both, have time to stay home and not hand the child over to strangers and rush back to work,” he says.

Levs isn’t just calling for better workplace policies, he’s also asking men—and women—to re-examine what it means to be a dad. He argues that the antiquated expectations of a worker-bee dad and a stay-at-home mom have left modern fathers feeling shut out at home in the way some mothers feel shut out at work, even as fathers are increasingly aware of the importance of active parenthood. That’s creating an identity crisis for the American dad. “We are carving out a new role for fathers in America,” he says. “That’s a challenge and an opportunity. There are opportunities that men have now that our fathers didn’t have. So that gives us a chance to define a new meaning of manliness.”

“We’re all in this together, pushing forward for a new meaning for fatherhood.” 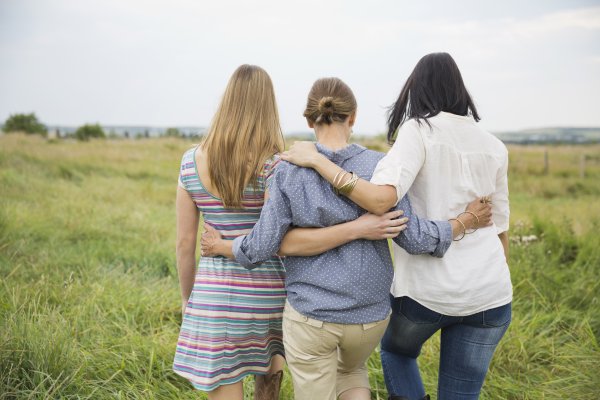 The Graduates
Next Up: Editor's Pick