Democrats Play Hardball on Voting Laws Ahead of 2016

This Oct. 2, 2012 file photo shows voters waiting in line to pick up their ballots inside the Hamilton County Board of Elections after it opened for early voting, in Cincinnati.
Al Behrman—AP
By Sam Frizell

There was a rare détente in the fight over early voting in Ohio last month. The ACLU and the NAACP came to a compromise with the Republican Secretary of State. Early voting days would be reduced from 35 to 28 days, but early voting hours were extended to include Sundays and after work on some weekdays.

“We have an incredibly robust system of early voting thanks to this settlement,” said Freda Levenson, legal director of the state’s ACLU chapter. Secretary of State Jon Husted likewise called it a victory for Ohio voters.

But for Democrats looking ahead to 2016, that wasn’t enough. Just two weeks after the settlement was reached, a team of Democratic-aligned lawyers filed another lawsuit, claiming that Ohio’s voting laws still make it too difficult blacks, Hispanics and young people to vote. The most prominent attorney behind the new challenge? Marc Elias, the go-to lawyer for Hillary Clinton’s emerging campaign.

Clinton’s campaign told TIME it is not behind the lawsuit, and Elias said the litigation had been in the works for some time. But there is no denying the lawsuit’s Democratic stamp. The attorneys on the case have longstanding ties to the Democratic party: Donald McTigue was general counsel for Obama’s reelection campaign in the state, and five of the seven lawyers on the case (including Elias) are from the left-leaning firm Perkins Coie. The plaintiff, the Ohio Organizing Collaborative, is nonpartisan but supports progressive efforts in the Midwest.

The current legal challenge in Ohio is an early glimpse into some of the Democratic-led fights that will unfold over the next 18 months before the general election, as attorneys begin to aggressively challenge restrictive voting laws enacted and implemented predominantly by Republicans.

“You’re going to see an increase in the number of lawsuits challenging restrictive voting laws because there is a concerted effort by some on the right to make it harder to vote,” Elias, Clinton’s campaign lawyer who filed the case, told TIME. “You will see more lawsuits because there are more bad laws.”

Ohio is a conspicuous battleground for the first voting rights challenge of the 2016 election cycle. It is a swing state, one that the Democratic presidential nominee will likely need to win to prevail in the general election. The new, Democrat-backed lawsuit retreads some of the same ground as the nonpartisan settlement. And compared with other states, Ohio already has a relatively open voting process.

The lawsuit is part of a widening debate that has increasingly fallen along partisan lines, even as both sides insist they only seek to uphold the Constitution.

“Both parties over time have been guilty of using their power to enact legislation to affect elections and keep themselves in power,” said Levenson of the ACLU. “Republicans and Democrats have done that, and continue to do that.”

Recent battles over voting laws can be traced to the aftermath of Obama’s decisive 2008 electoral victory, which was due in part to high turnout among young people and minorities. Republicans in many states began enacting laws that required voters to bring state-issued identification cards, cut back on early voting hours or tightened the requirements for provisional ballots.

Nonpartisan groups as well as Democrats said that the laws disproportionately affected minorities and fought back in the courts. There was no evidence, they said, of voter fraud that could justify the new Republican laws, arguing that the restrictions violate voters’ constitutional rights.

President Obama’s reelection campaign in 2012 was marked by Democratic challenges to restrictive state voting laws in an effort to open up the voter pool in battleground states. Obama for America brought a case in Ohio with McTigue McGinnis & Colombo LLC, one of the firms that is bringing this month’s case.

Today, there are challenges in the courts over laws in Texas, Wisconsin, North Carolina, Tennessee and others, as well as Ohio. The volume of lawsuits is likely to increase in the 18 months before the 2016 election. The Democratic National Committee is preparing for a hard-fought 50-state effort to expand voting, partly through litigation, with a special focus on battleground states. Nonpartisan civil rights groups are gearing up, too.

“We are working with partners daily in a number of states with an eye towards 2016 in order to prepare for those elections,” said Chris Fields, manager of legal mobilization at the nonpartisan Lawyers’ Committee for Civil Rights Under Law. “If a law is going to make it more onerous for voters to participate, that’s where you’ll see the challenges.”

In cases like the one in Ohio, Democrats may be prepared to go farther then nonpartisan civil rights groups.

While Ohioans in 2004 and 2008 faced notorious obstacles to vote, it today has one of the more open voting systems in the country, with 28 days of early voting, polls open for 13 hours on Election Day and one-third of voters in the state voting by mail. The average wait time to vote in Ohio compares favorably to other states, according to research by Pew which found that Ohio voters waited on average 11 minutes to vote in 2012, compared with 25 minutes in South Carolina and 45 minutes in Florida the same year.

Other solid blue states may have more obstacles to voting than Ohio. New York has no early voting at all. California residents cast error-prone provisional ballots—which are disproportionately used by minorities and are rejected at high rates—much more than Ohioans.

Critics say that it’s no coincidence the first lawsuit of the 2016 cycle was filed in Ohio, and not elsewhere. Husted, the Secretary of State, said that a Democratic lawsuit so close on the heels of the earlier settlement is an attempt on the part of “legal lapdogs” to “interject chaos in the system.”

“We already settled all these issues,” Husted, a defendant in both cases, told TIME. “Less than two weeks later, the lawyer for the next presidential campaign files a lawsuit, and I think that Ohioans are growing pretty tired of the outside meddling in our election system.”

The new Democratic Ohio lawsuit challenges a number of state provisions, including the use of just one polling place in each county for early voting, the reduction of some electronic voting machines, and Ohio’s elimination of one week of early voting, among other measures. Some of the measures are recent directives of Republican Gov. John Kasich’s administration.

The lawyers say in the new complaint that Ohio’s voting measures, many introduced by a Republican gubernatorial administration, “disproportionately burden specific populations, including African Americans, Latinos and young people—each of which are, not coincidentally, core Democratic constituencies.”

Democrats’ focus on a battleground state like Ohio is a harbinger of efforts to come.

“What we see right now is an election war being fought within legislatures and within courts,” said Pratt Wiley, national director of voter protection at the DNC. “We really do view this as way to help us win elections as well as it being the right thing to do.”

Elias, Clinton’s lawyer, is a longtime Democratic player who has represented the DNC and many of the party’s dignitaries.

Last year, Elias represented Virginia voters in a lawsuit that accused the state’s General Assembly of racially discriminatory gerrymandering, and he helped write a federal law that increased the amount of money rich donors can give to the Democratic and Republican parties. He was the top lawyer on John Kerry’s 2004 presidential campaign.

Elias said he did not coordinate with Clinton campaign in the Ohio suit, and he pointed to a history of voting issues in the state. “We’re trying to fight efforts that make it harder to vote,” Elias said. “Why Ohio? For the same reason as in any state that cuts back and makes it harder to vote.”

Still, the Clinton campaign will likely keep an eye on the lawsuit as it progresses.

“This lawsuit was not filed on behalf of the campaign,” said a Clinton spokesperson. “However, the campaign shares the concern about undue burdens being placed on the right to vote in states across the country, including Ohio.”

Correction: The original version of this story misstated the title of Freda Levenson. She is the legal director of the ACLU of Ohio. 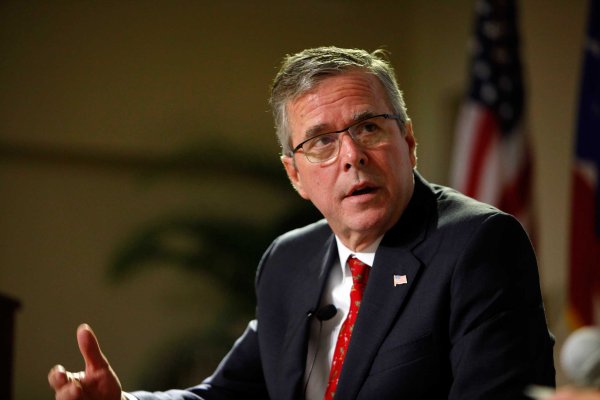 The Hypothetical Dodge
Next Up: Editor's Pick